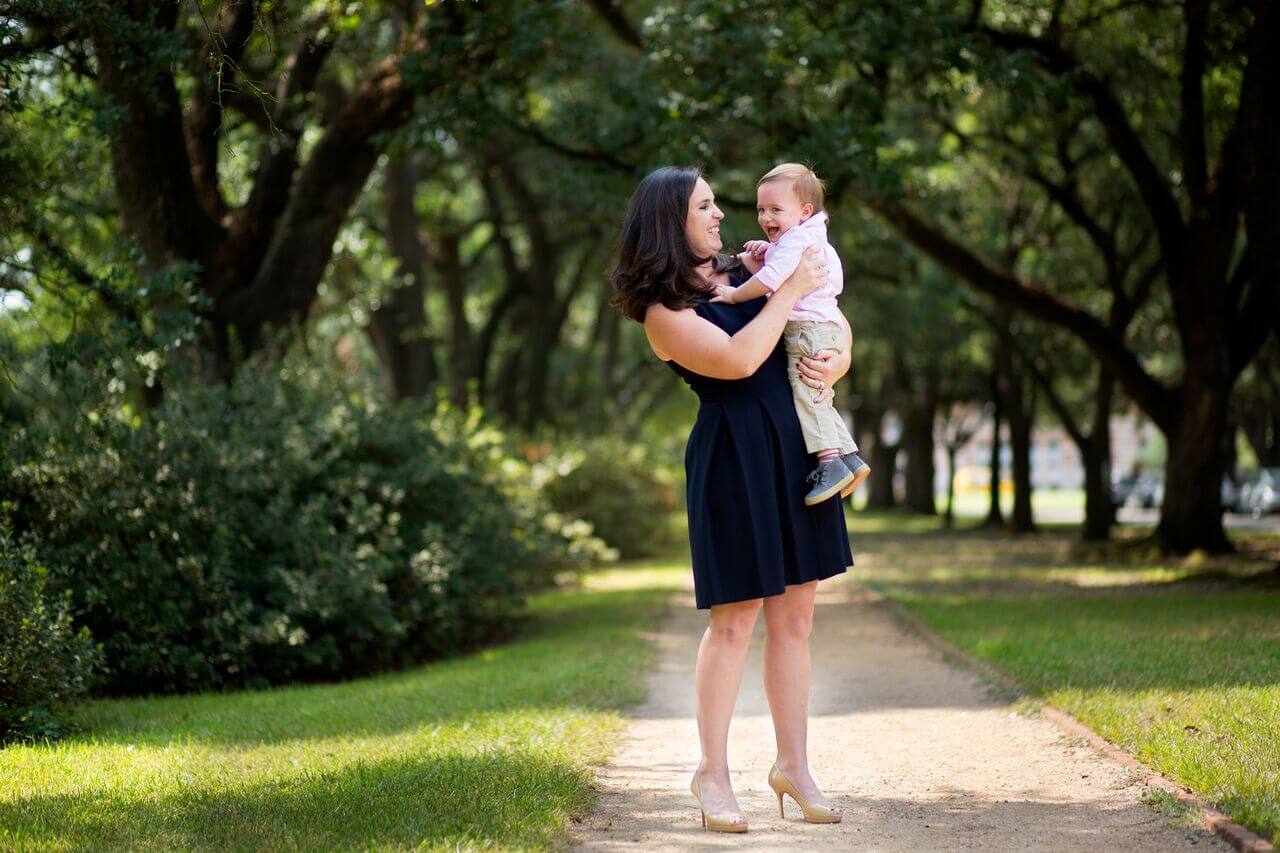 MOLLY HACKETT LaFAUCI always dreamed of being a mother. But her journey has been more painful and complicated than she could have imagined. Miscarriages and postpartum depression have driven LaFauci, now a mother of three, to speak out about her own struggles with mental illness. She hopes her story will help other women facing similar challenges.

Q | When did you decide to start a family?
A | My husband and I were married when we were 25. We got pregnant with our first child, our daughter, Caroline, very easily and quickly. I was sick during the pregnancy, but other than that it was a very normal, run-of-the- mill pregnancy. I ended up having a C-section, but she was perfect and had no issues. The childbearing process has been horrendous for me after that.

Q | What made childbearing so difficult?
A | When Caroline was three months old, I got pregnant and miscarried early on in the pregnancy. That was my first miscarriage. I had four more miscarriages between our first and second children. The final miscarriage was a twin. I had no idea that there were two babies, but we were told the baby inside me was still thriving. We were blessed with a healthy second child, daughter Isabella, in April 2013.

Q | Did you want to have more children?
A | I did. I felt like I wasn’t done and that our family wasn’t quite complete after I had Isabella and I wanted to bring another baby into our loving home. But after everything we had been through, my husband thought that we had had enough and should take a break to enjoy our two healthy, happy daughters. I agreed with him that a break was probably best both mentally and physically. I had an IUD put in as soon as I could after giving birth, but 15 months later, I was unexpectedly pregnant. I think there is a .04 percent chance you can get pregnant with an IUD, so my husband and I were both very confused as to how I had managed to be one of the very few. We were obviously grateful for another baby, we just weren’t prepared. There are a lot of complications that can arise when you get pregnant with an IUD. If you leave it in, there can be problems, and if you take it out, there can be problems. After a lot of prayer and discussion with our doctors, we decided to remove it. The baby made it through the first 36 hours so we felt confident we would be welcoming our third child months later. And this time, it would be a boy.

Q | What was this pregnancy like?
A | We had just moved from Houston to Granbury, Texas, for my husband’s job. It is a small town, hours from family, friends and the life to which we had grown accustomed with our first two children. We didn’t know a soul. During my pregnancy with Isabella, I started seeing a reproductive therapist because of my lack of connection to my pregnancy. When I found out I was pregnant again, that psychiatrist was the first person I emailed. We were very aware of the risk I had of developing a more severe depression than the one I man- aged day-to-day due to the hormonal, mental and physiological changes brought on by pregnancy, so we were on high alert. As expected, during this third pregnancy, I did not connect to the baby at all. I did not get excited. I didn’t buy him anything. I didn’t finish his nursery before he was born. My husband understood my lack of interest probably stemmed from the miscarriages and the fact that we had not planned on having this baby. He was excited and often felt he needed to temper his excitement so as not to make me feel more guilty for my feelings.

Q | And then the baby came early.
A | When I was 33 weeks pregnant, we came back to Houston to celebrate Easter with our extended family. I was in my psychiatrist’s office and she was asking how I was doing. I told her that I hadn’t felt the baby move in a while, so she sent me upstairs for an evaluation by a number of specialists. They told me I was having contractions, gave me a shot and told me to stay close to the hospital if the contractions grew more frequent and painful. Eventually, I went back to the hospital and doctors discovered I was at a high risk for a uterine rupture. After getting a number of opinions from various doctors, specialists and my psychiatrist, my husband and I decided it was best to have an emergency C-section. The surgery went well and our son, J.J., was born.

Q | How did you feel about the baby after giving birth?
A | Since J.J. was born early, they took him, assessed his lungs, brought him over and showed him to me, and then immediately took him to the NICU. Looking back, I think being able to hold him could have helped. I felt like the postpartum kicked in the second he came out of me. My psychiatrist came to recovery to see how I was feeling, and I said ‘I don’t want to see the baby. I don’t love him. I’m not excited he’s here.’

Q | Did you eventually feel better about being around J.J.?
A | It was weird when I saw him. I didn’t feel like he was mine. I was very eager to hand him off to any and all nurses or family. I only saw him one other time before they discharged me. I never nursed him; instead, I pumped. That took a lot of pressure off of me because I didn’t want to nurse. I didn’t want him close to me. When he was finally released from the hospital, he joined us at my mom’s house in Houston, where we were fortunate to have a night nurse to help. I let her focus on J.J. and care for him while I tended to his sisters. When it was time to return to Granbury, three weeks after J.J. was born, my family was nervous I would need more help than I realized. I hadn’t spent much time with him and would suddenly be responsible for all of his day-to-day needs. My mom suggested we take our night nurse along, so she came back with us, full-time. I think having her there was kind of a buffer for me to further avoid my son.

Q | How did your postpartum depression manifest itself once you got home?
A | I was incredibly irritable and snapped at my husband and daughters. Kids are tough and you snap every once in a while, but this was constant. I definitely wasn’t sleeping. My baby nurse had gone back to Houston and she was going to return on Monday. It was Saturday and I went to put the baby down and he was so fussy. I had this moment where I was like, “Can you just fall asleep?!’ And I thought something like: I want to put a pillow over his head to make him stop. All of a sudden I understood why people shake their babies. I stepped away from the crib and called my psychiatrist.

Q | Were you on medication at this time?
A | Against doctors’ orders and unbeknownst to my family, I had stopped taking my medication. And for a year I had been having passive thoughts of suicide. My psychiatrist said that I needed to go to the hospital. She was very calm and non-judgmental.

Q | How was your treatment at The Menninger Clinic?
A | I found out that I had been on the wrong medications, that I couldn’t metabolize my anti-depressant properly. I went to group therapy. There was a wonderful suicide resilience group and I remember the first time I sat in on it, I had to hold my hands on the chair to keep myself in the room. I could feel my heart beating out of my chest because I knew what I was thinking and I felt so badly that I wanted to take myself away from my children. Like many things, it wasn’t easy to acknowledge that I might belong to a group that needed a special focus. I learned about postpartum OCD, something I thought explained my thoughts and actions. I realized that although I had thoughts about hurting my son, I was never in a place where I could hurt him because I knew there was something wrong with those thoughts—that’s why I called my doctor.

Q | Did you continue therapy after returning to Granbury?
A | I started a support group when I was in Granbury. I had been driving an hour and a half to see my therapist, who also specialized in reproductive psychiatry, because that was all that was available. Which is horrible. She and I started a support group for moms with postpartum depression and that was probably the biggest turning point for me in my recovery. It was so incredible for me to realize that I wasn’t the only person who thinks this way and who has experienced this and who feels like a bad mom for this crisis in my life.

Q | How is your relationship with J.J.?
A | Once we moved back to Houston, I started going to the support group that the Texas Children’s Hospital Pavilion for Women offers for mothers going through postpartum depression. Being with women that were in the same place as me and had the same thing going on was very powerful. I realized that my recovery had gotten to a certain point, when my son was around nine months, that we really started to connect. My husband was out of town for two weeks recently and I did fine. I enjoyed my children. All I ever wanted was to be a mom, so it was very difficult for me to hate being a mom to this little man. I haven’t totally forgiven myself, but I’m working on that.

Q | What do you want other women to know about postpartum depression?
A | Most people think that a woman with postpartum depression wants to kill her children and that is not the case—less than one percent of women who experience postpartum depression have those feelings. It is the number one complication of childbirth and we don’t talk about it because there is a stigma attached. I am not ashamed of it anymore. That comes with a lot of familial support, a wonderful husband who encourages me every day and a fabulous team of clinicians who never once judged me.