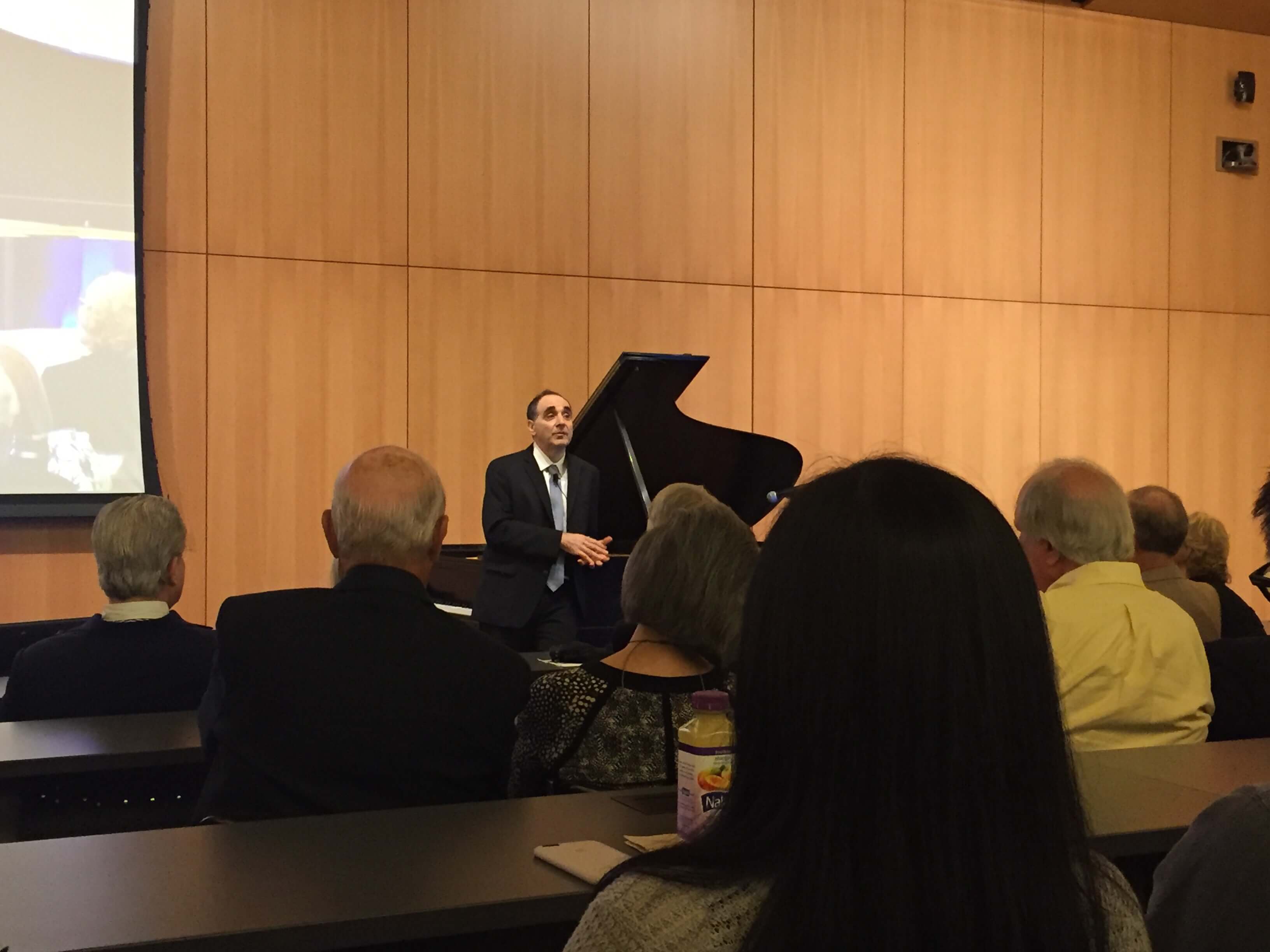 The Center for Performing Arts Medicine at Houston Methodist Hospital commemorated its 20th anniversary with a lecture on arts and medicine on Oct. 6. The Inaugural Susan and C. Richard Stasney MD CPAM Lecture in Arts and Medicine was named for the center’s founder and chair emeritus, and his wife.

“We wanted to do something that recognized our founder, Dr. Stasney, and also add something to the education side of arts and health,” said CPAM director, J. Todd Frazier. “We want to share with the community how arts and medicine are intertwined in and outside of the hospital setting.”

The lecture was given by Richard Kogan, M.D., a psychiatrist and concert pianist. Kogan is a clinical professor of psychiatry at Weill Cornell Medical College and artistic director of the Weill Cornell Music and Medicine Program. He is a graduate of the Juilliard School of Music Pre-college, Harvard College and Harvard Medical School. Kogan completed a psychiatric residency and academic psychiatry fellowship at NYU and has a private psychiatry practice in New York City.

“We live in specialized times now, so we tend to think of arts and medicine as different areas with very little overlap, but that wasn’t always the case,” Kogan said. “In the Ancient Greek culture, they designated Apollo as the God of both medicine and music and in a lot of primitive cultures the role of physician and musician were played by the same person.”

“I am doing a program on Beethoven for a couple of reasons,” he explained. “First of all, Beethoven had a really serious illness which had an amazing impact on his creative process. The other reason is – and I am going to quote Dr. Stasney – “Beethoven is my hero.”

Beethoven’s artistic journey can be divided into three parts, Kogan explained, and each period was informed by different psychological and medical factors.

“Deafness unquestionably worsened Beethoven’s paranoia, but these character traits existed long before he had hearing problems,” Kogan said. “Deafness is a hardship for anybody. For a musician, it is catastrophic. So it is not surprising that he would contemplate suicide. But as you heard in his letters, he was going to hold off on the suicide until he fulfilled his destiny as an artist. Deafness actually made Beethoven become a much better composer; it narrowed his scope in a way because his career as a pianist was over and he was much more socially isolated. Once he was locked in the silent world of his imagination, he was no longer hearing the work of his contemporaries like Haydn or under the influence of traditions. He was free to conjure up forms to imagine sounds.”

Near the end of his life, Beethoven suffered from many health complications caused by severe lead poisoning and excessive alcohol consumption. His final years were tumultuous.

“We wanted to have Dr. Kogan as our inaugural speaker because he is very unique and he is a great example of a very accomplished physician who has been inspired by music,” Frazier said. “He can share his inspiration with others because of his extraordinary skills as a pianist. In the future, we envision the lecture to be a wide variety of things, focusing on different entry points for the arts within the health environment.”