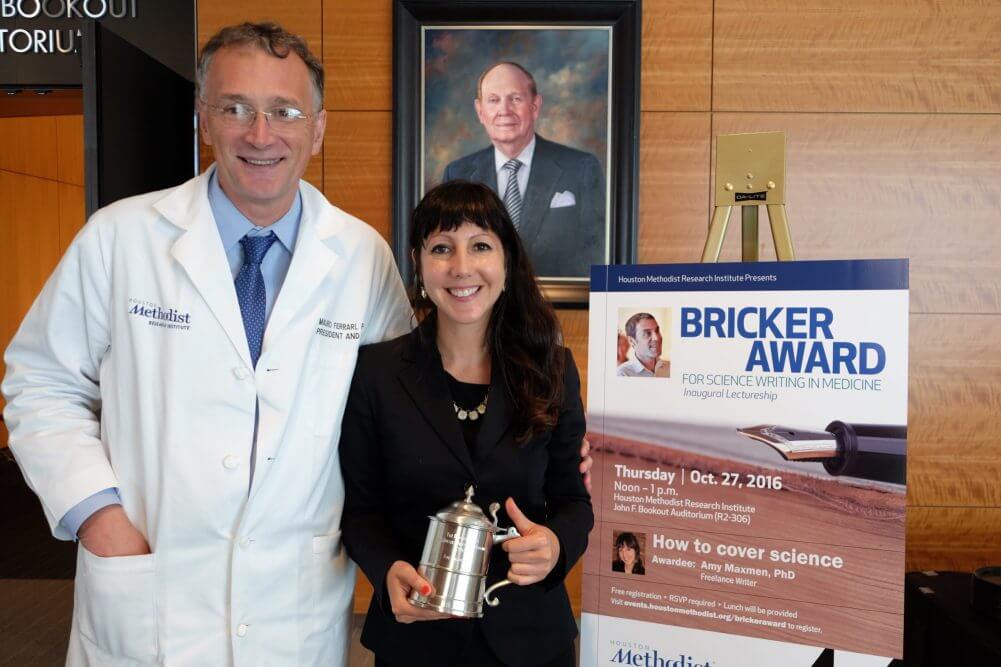 Freelance writer Amy Maxmen, whose work has been featured in Nature, Wired, National Geographic and Newsweek, is the recipient of the inaugural Bricker Award for Science Writing. In her presentation, titled “How to Cover Science,” Maxmen told the crowd that the trick of writing a great science story is to figure out how to make a topic interesting to anyone.

“I think a lot about my audience,” said Maxmen, who holds a Ph.D. in organismic and evolutionary biology from Harvard University and has written about some of science and medicine’s most significant issues, including the Ebola epidemic, CRISPR genome editing and the anti-vaccination movement. “I’m not just writing to get something off my chest. Instead, I want my pieces to be read. So when I do that, one thing is that I have to picture my audience, and I picture them as somebody who is really smart, but maybe not interested in science at all.”

Maxmen went on to explain how she tries to frame her stories to keep the reader absorbed and how she works to balance hard science with a narrative. She spoke about some of her recent pieces and used examples to illustrate her reporting and writing styles. In the end, each of her stories circles back to the humanity behind the science—something to which we can all relate.

The Bricker Award for Science Writing in Medicine was created to honor Bricker after he passed away from gastric cancer in August 2015. The award recognizes and supports writers like Bricker who are passionate about sharing medicine’s most critical and often neglected stories.

“I am honored and I’m also really grateful to all of the great science writers out there and the editors who have really helped my own writing,” said Maxmen, whose work has taken her to exotic and sometimes hazardous locations including Mali, Sierra Leone and South Africa.

At the close of the presentation, Ferrari presented Maxmen with an engraved, silver-plated beer stein—an homage to Bricker’s self-proclaimed passion for craft beer, and surely one of the science writing profession’s most unique awards.

More information about David Bricker and the Bricker Award can be found here: https://www.houstonmethodist.org/brickeraward/. To read Amy Maxmen’s stories, visit her website at https://amymaxmen.com.