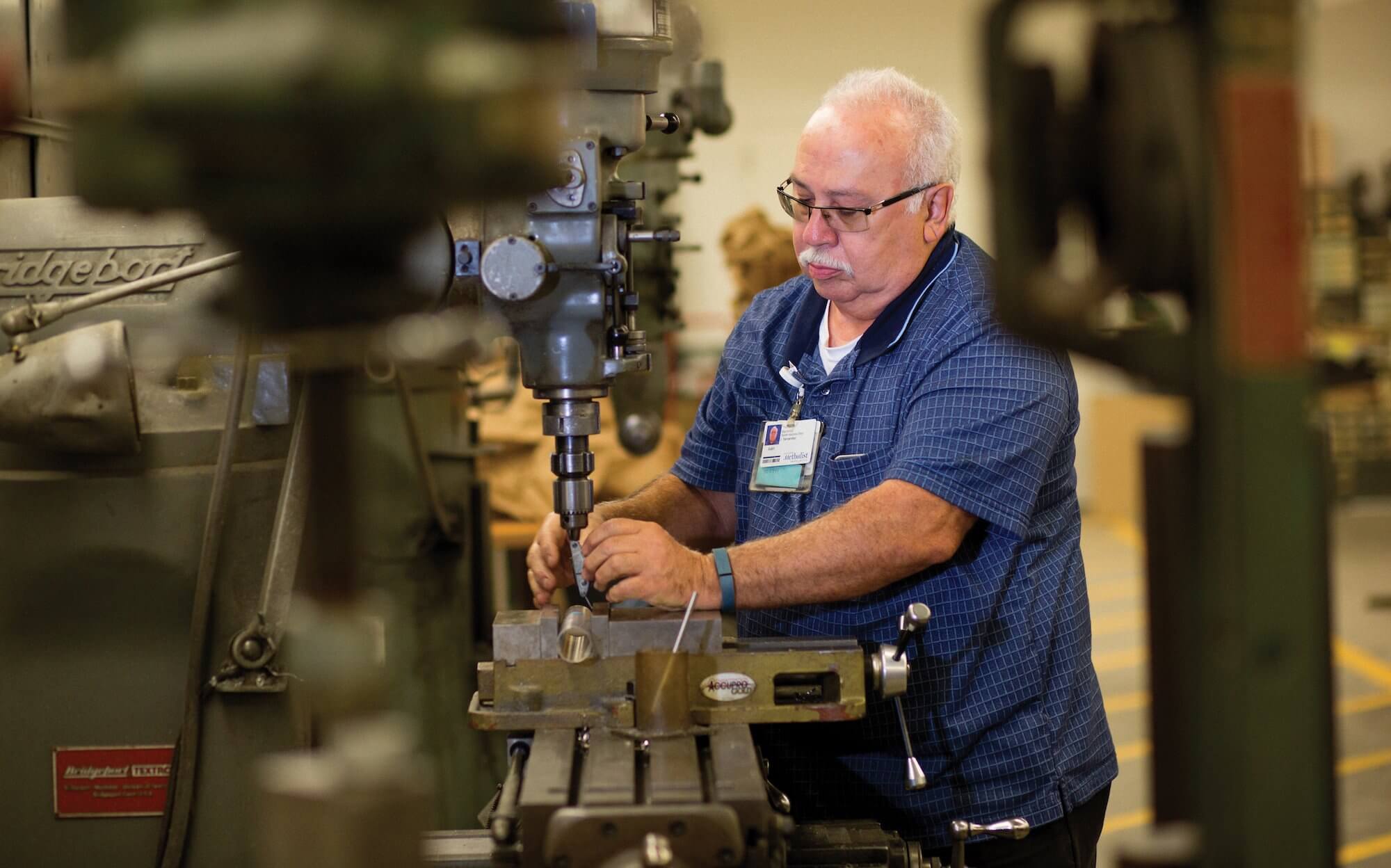 Albert Huang, M.D., founder and CEO of Allotrope Medical, was a general surgery resident at Houston Methodist Hospital when he realized he had a great idea for a medical device.

Huang often assisted on sigmoid colon resection, a surgery to remove part of the colon affected by conditions including diverticulitis—an inflammation of the colon.

“As I would work with the more senior surgeons, there would be certain aspects of the operation that were often time-consuming,” said Huang, a member of the Texas Medical Center Innovation Institute’s first TMCx accelerator medical device class.

A critical step of a sigmoid colon resection is locating the ureter, a tube that carries urine from the kidney to the bladder, to make sure it is not harmed during surgery. Damage to the ureter is not uncommon and can lead to problems including urine leaks (a hole in the ureter), abscesses (swollen areas where pus collects), a loss of kidney function or even death.

“We did one resection where there was a lot of scarring, and we probably spent 30 percent of the time trying to identify the ureter before we could even start the surgery,” Huang said.

Surgeons typically do one of two things to locate the ureter before surgery: Have a urologist find it and place a stent in it, or search for it themselves via tissue dissection.

While considering different ways to simplify this process, Huang took inspiration from a method anesthesiologists use to make facial nerve muscles twitch via low-current electricity. He built a hand-held device that sends a short pulse of current down the tip of the device with the push of a button. The current causes the ureter to contract; that way, surgeons know where it is and can avoid harming it.

Huang hopes the TMCx accelerator class will help him refine the device and capture the attention of doctors interested in trying it.

Over the years, many Texas Medical Center doctors, researchers and personnel have helped design or implant medical devices considered state-of-the-art for their time.

In 1966, the late Michael E. DeBakey was the first to successfully implant a left ventricular assist device (LVAD), which pumps blood to the body after the heart has failed. DeBakey worked at Baylor College of Medicine, directed the Houston Methodist DeBakey Heart & Vascular Center and was senior attending surgeon at Houston Methodist Hospital. He and colleagues developed the DeBakey Ventricular Assist Device; DeBakey believed that  two of these working together could function as a total heart replacement.

Denton Cooley, M.D., once DeBakey’s protégé and then a cardiologist with the Texas Heart Institute, was the first to implant a total artificial heart into a patient in 1969.

If doctors DeBakey and Cooley are considered the James Bonds of medicine, Juan Fernandez would be the medical device equivalent of “Q.” He was working in the machine shop at Baylor College of Medicine when asked to help DeBakey prototype an early version of the LVAD. The prototype was a small, plastic device that featured an impeller, a fan-like rotor operated by magnets. Today’s versions have a titanium impeller.

Now lead machinist at the Houston Methodist Machine Shop, Fernandez is proud to show off the prototype, which he keeps in the drawer of an old tool chest. Fernandez’s father died of a heart attack when he was young.

“I take pleasure in knowing that I have helped people, though I wish I could have helped my dad,” he said.

Fernandez is still helping people with his prototypes. He is in the early stages of a project with the Texas Heart Institute and BiVACOR, a Houston company headquartered at the institute, making impellers for a total heart that pumps blood through the body without a pulse.

Called the Infant Jarvik VAD, it is named for Robert Jarvik, M.D., inventor of the first successful total artificial heart.

With support from the federal government through the National Heart, Lung and Blood Institute, this AA-battery-size device has undergone pre-clinical testing; Adachi anticipates approval for a human trial sometime this year.

In the pediatric world, most of the ventricular assist devices are pulsatile, meaning they pump like the heart. But they can fail, which is why most adult VADs are now continuous flow devices—pumps that help push blood through the body using an impeller, Adachi said. Currently there aren’t pediatric continuous flow devices available. Texas Children’s hopes to change that.

“It is more challenging to make a smaller pump with a favorable performance,” Adachi said. “As such, the U.S. government has been trying to help companies that have an interest in pediatric devices. They have funded several different companies, and Jarvik is one of them.”

Jarvik tried to get FDA approval for a clinical trial two years ago, but failed, Adachi said. After significant design changes, Adachi came on board to implant the device in animals. He wasn’t part of the first trial, but said the data collected seems to be much more favorable than the previous testing. A new application for clinical trial was completed in September. If approved, the Pumps for Kids, Infants and Neonates (PumpKIN) trial is likely to begin by the end of the year.

Texas Children’s implants about 20 to 30 VADs per year, Adachi said.

“If the Jarvik pump becomes available, that may change our device support paradigm, and we may have more potential candidates,” he said. “Now we have limited options on what kind of patient we can support.”

Medical devices of the TMC

In 1996, Zvonimir Krajcer, M.D., repaired an abdominal aortic aneurysm by inserting a stent graft into the aneurysm through small incisions in the groin. To execute this new technique, Krajcer, now program director of peripheral vascular interventions at the Texas Heart Institute and Baylor-St. Luke’s Medical Center, designed a tiny graft, 4.7 millimeters in diameter, to help seal off and repair the aneurysm.

The Kim-Dannenbaum-Shin Microsurgical Robotics Laboratory at the Memorial Hermann Mischer Neuroscience Institute and the McGovern Medical School at UTHealth is developing robotic devices for procedures to treat cerebral strokes and other brain abnormalities. The devices can navigate small, narrow and branched blood vessels in the brain to reach sites deep in the body.

Rice University bioengineering students created a low-cost neonatal breathing system as part of the Rice 360° Institute for Global Health. A study of the bubble Continuous Positive Airway Pressure (bCPAP) device showed it could save the lives of 178,000 low-birth-weight babies in Africa each year.

Jarek Wosik, a principal investigator at the Texas Center for Superconductivity at the University of Houston, has developed a high-temperature superconducting coil that allows magnetic resonance imaging (MRI) scanners to produce higher resolution images in a shorter period of time.

The University of Texas Health Science Center at Houston

Steve Norris, Ph.D., vice chair for research in the Department of Pathology and Laboratory Medicine at UTHealth, developed a diagnostic test to positively identify patients suffering from Lyme disease. He collaborated with Alan Barbour, Ph.D.