Engineering Answers from the Ground Up

Engineering Answers from the Ground Up 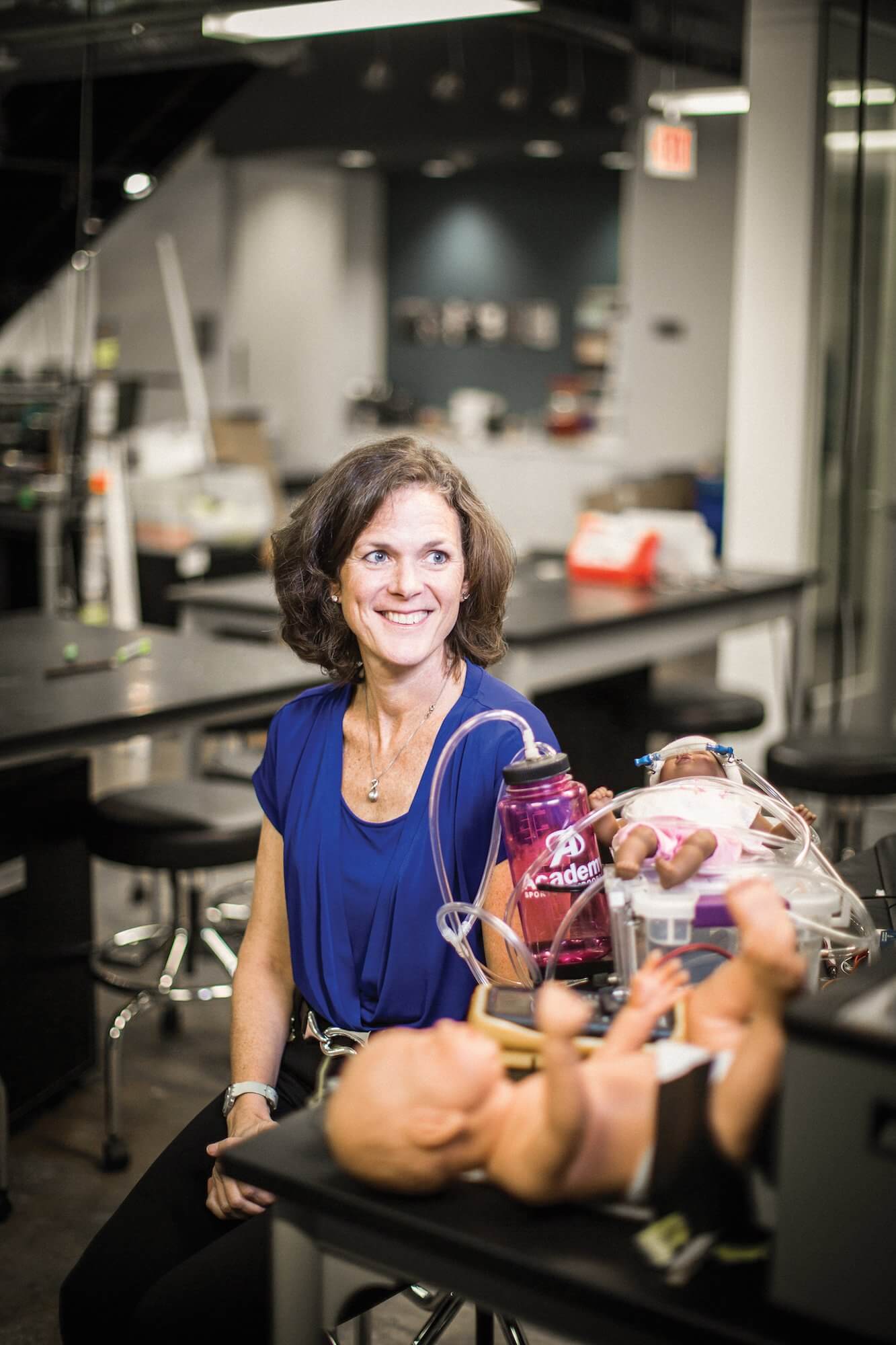 The first thing Leah Sherman noticed was how tiny the babies were. “Smaller than any infants I would ever expect to see,” she said. Scanning the room, her mind shifted to the potential design flaws associated with the wooden “hot boxes” being used as neonatal incubators. With four incandescent lightbulbs serving as the heating source, temperature control would be tricky. But compared to many hospitals in Africa, where babies are wrapped in blankets and positioned close together on cots to keep warm, these boxes were innovative.

Sherman is a bioengineering undergraduate at Rice University and part of a group of student interns and advisors from the Rice 360° Institute for Global Health who traveled to Blantyre, Malawi, this past summer to work alongside local physicians, nurses and engineers. When she visited the Queen Elizabeth Central Hospital’s Gogo Chatinkha maternity wing, Sherman observed skilled surgeons, caring and knowledgeable nurses and an unrivaled work ethic. She also witnessed how easily cutting-edge technologies could fail.

“We would see these equipment graveyards,” Sherman said. “Millions of dollars of broken equipment just sitting there, unused. Most of the time they knew exactly what was wrong, but they didn’t have the parts to fix it.”

Imagine the frustration of working in a ward where babies die each day, and the machines to prevent those deaths sit broken beyond repair in the hallway, a constant reminder to every passing health care worker of the lives they could be saving if only they had the right equipment.

“Sometimes people think that what you need to do is take existing technology from the developed world and just pull out features until it gets cheap enough to put in the developing world,” said Maria Oden, co-director of Rice 360°. “I believe that’s the wrong approach. I strongly believe that we need to be designing a technology from the ground up that is designed to meet the particular needs of  that environment.”

What this means for a NICU in Malawi is creating devices that can perform the same function as those in, say, the Texas Medical Center, but that are more durable—built to withstand heat and humidity and power outages—and, in some cases, made of parts that can be sourced locally.

Oden directs the Oshman Engineering Design Kitchen (OEDK), a working space for Rice engineering majors to collaborate on solutions to problems exactly like this. Housed in what used to be the main kitchen for the entire campus, the OEDK provides access to the tools, facilities and working space necessary to be creative. It is a hub of activity, with nearly  100 projects in process at any given time—not all related to global health. Topics range from energy and sustainability to robotics.

“This is not just an academic exercise where students get a grade and move on,” Oden said. “We want to pair a student’s interest with a real-world project they’re passionate about. What this means for students is that the stakes just got a little bit higher.”

The projects come from community partners, or “clients,” who have a tangible need for the inventive minds of engineers. Physicians from the Texas Medical Center, the energy industry, NASA and biomedical startups have all presented projects to the OEDK.

Considering that Rice’s mission is to provide a solid and robust education for its students, the model is brilliant. Not only are students more motivated, but they are also gaining real-world experience that will prepare them for their careers. They work in teams across disciplines and learn lessons in leadership and project management. They’re searching for answers that can’t be found in the back of the book, discovering what it means to be good engineers, not just good students.

“Nobody builds their first prototype and has it work perfectly, even though on paper and in theory they do the calculations and everything should work great,” Oden said. “Usually when they build it, something goes wrong; they made an assumption somewhere along the way, and then they have to figure out how to fix it.”

Each spring, the students present their projects in the Engineering Design Showcase. The competition features design prototypes and provides an opportunity for students to practice their pitches with more than 80 judges as well as Rice faculty and students, industry professionals and members  of the community. The projects for the 2016 showcase in April were so impressive that the competition ended in a tie between two teams: “Brays Yourself” designed modifications to portions of the Brays Bayou in Southwest Houston to help reduce the 100-year floodplain in the area, and “Rice Outstenting” created a device to improve the process of removing ureteral stents.

Sherman and her design partner, Mikaela Juzswik, were each present, pitching their mechanical breast pump for low resource settings. It is elegant in its simplicity: a rocking chair powers the pump, so a mother could sit and rock while expressing her milk— no need for hands, and no need  for electricity.

“In low resource settings, women don’t have access to breast pumps because they’re expensive,” Sherman explained. “They’re also difficult to repair if anything breaks, and if the electricity isn’t reliable, there will be chunks of time when you can’t operate the pump. This is extremely problematic because some children are too weak to suckle.”

Hand-expressing is not efficient and formula is not sustainable— especially if it requires access to clean water. Through canisters and cycles of negative pressure, Sherman and Juzswik created an ingenious and comfortable solution.

Sherman took the prototype to Malawi where she received valuable feedback about the design. Although this trip was focused on neonatal hypothermia and the reliability and function of oxygen concentrators, the interns brought along a handful of additional prototypes, among them a temperature monitor for kangaroo care, a heating sleeve for the CPAP system and a pneumatic compression device. In addition to working with nurses and doctors at the Queen Elizabeth Central Hospital on employing new technology, members of the team also partnered with engineers and students at The Polytechnic, part of the University  of Malawi, to focus on sustaining  the technology.

On June 29, the Rice team attended the dedication ceremony for the Gogo Chatinkha maternity wing. The new expansion was made possible by fundraising efforts at Rice 360° and a generous gift from the program’s co-directors, Oden and Rice bioengineer Rebecca Richards-Kortum. The  two women donated $100,000 in personal prize money from winning the 2013 Lemelson-MIT Award for Global Innovation.

“We couldn’t imagine a better use for the money,” said Richards-Kortum, Rice’s Malcolm Gillis University Professor and recent winner of a MacArthur Foundation “genius” grant. “Already our student-created technologies are saving the lives of newborns at Chatinkha. We are excited to continue working together with local clinicians and teams of students from Rice and the University of Malawi to create more helpful technologies.”

The fundraising campaign, dubbed the Day One Project (“make day one  of a baby’s life a day of celebration and survival”), didn’t end with the expansion. Oden and Richards-Kortum are working with students on an ambitious project to develop a suite of 17 technologies designed specifically for low-resource settings. It will be a “Nursery of the Future” and, according to Oden, it could prevent more than 80 percent of all newborn deaths.

“Ninety percent of the world gets their health care in places where access to health technology is limited, so we need to figure out ways of providing the best possible health care in that environment,” Oden said. “We believe that we can create a low-cost but effective suite of technologies to support essential newborn care at district hospitals in resource-limited settings.”

Already, one of the OEDK’s projects, the low-cost Pumani bubble CPAP (Continuous Positive Airway Pressure) machine, is in use at all central and district hospitals in Malawi. The device, which was initially prototyped using a Nalgene water bottle and a shoe box, delivers pressurized air to a newborn’s lungs to treat respiratory distress syndrome—a leading cause of death among infants. It is as effective as traditional CPAP machines and, according to Oden, was shown to improve survival of babies with respiratory distress syndrome from 23.5 percent to 65.5 percent in a clinical evaluation at Queen Elizabeth Central Hospital in Malawi. Not surprisingly, the Pumani bubble CPAP has won grants from Save the Children and Saving Lives at Birth—a philanthropic partnership of multiple organizations, including the U.S. Agency for International Development and the Bill & Melinda Gates Foundation. It is currently being rolled out in more than 20 countries in sub-Saharan Africa, South Asia and the Caribbean.

And just this past August, another design baked at the OEDK was one of six technologies chosen for an 18-month validation grant by Saving Lives at Birth. The AutoSyP, which will be a component of the Nursery of the Future, is a low-cost syringe pump that works to reduce maternal mortality and improve neonatal health by delivering intravenous drugs or fluids in controlled amounts over a period of time. In developed countries, syringe pumps are considered standard and play a crucial role in treatment plans. An alternative like the AutoSyP, custom-designed for low-resource settings, has the potential to help millions.

If their goal is to tackle the biggest issues in global health while creating a new generation of ambassadors, then Oden and Richards-Kortum are right on track. Their reach has already extended to multiple countries. This past summer, student interns traveled to Barretos, Brazil, to identify patient needs and establish a good working relationship for future projects. Another group of students headed to the southernmost tip of Texas to test their diabetic ulcer wound-care model in Brownsville clinics.

“The opportunity for our students to tackle these problems that are really foreign to them, to also learn about society in other places and to learn about some of the challenges in delivering health care around the world, makes them better world citizens,” Oden said.