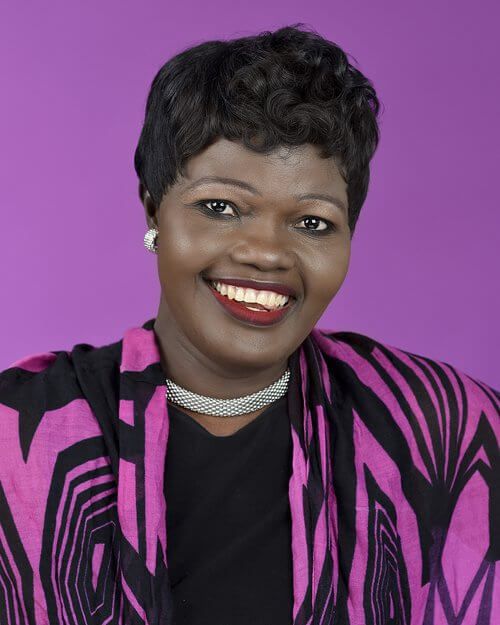 Mabel Ugbanaja from Nigeria lost her husband to cancer and survived aggressive breast cancer that metastasized to her brain, bones and liver. Through it all, the single mother now lives life with excitement.

“Cancer redefined me,” she says. “It built my faith and my confidence. Now I know the value of life. I don’t let negativity around me. I make my home a place of peace.”

In 2012, four years after emigrating to the U.S. from Nigeria, Ugbanaja felt a sharp pain in her right breast. She had no time to think about it. She was caring for her 3-year-old daughter and her husband who had pancreatic cancer. She worked as a home health caregiver to support her family.

When the pain continued and her nipple inverted, she could no longer deny she needed help. In quick order, she had a mammogram, a mastectomy of her right breast and chemotherapy. During this time, her husband died.

Two years later, she was in another relationship, still working and caring for her young family when her eye began to droop, speech slurred, left arm weakened and was having difficulty remembering her clients’ addresses. A persistent and severe headache eventually sent her to the emergency center at Harris Health System’s Ben Taub Hospital.

Test results were shocking. She learned she was four months pregnant, and her breast cancer, which she thought was behind her, had metastasized to her brain, bones and liver.

“It was a terrible experience,” she recalls. “I immediately had surgery to remove the tumor, but I had a horrible recovery. I hallucinated. My mind played tricks on me, and I was angry. I was put on 24-hour watch.”

Ugbanaja was in the hospital for three months. In addition to the brain surgery, she had surgery to remove a tumor from her spine and mild chemotherapy. Fortunately, staff worked with her to deliver her baby, born by cesarean section, in October 2014. After the birth, she continued chemotherapy and began radiation.

Perhaps, her best medicine came not in the form of a pill, but rather a hospital chaplain’s visit that “subdued all my doubts. By the grace of God, I got myself back,” she says.

She continues chemotherapy treatments and recent scans have revealed no more cancer.

Ugbanaja celebrates life and all the good that comes her way—things as routine as watching her children sleep and as special as her new U.S. citizenship certificate.

As challenging as her stay in the hospital was, she praises the work of doctors, nurses and social workers who even threw her a baby shower. “They were my family for three months and I’m so grateful,” she says.