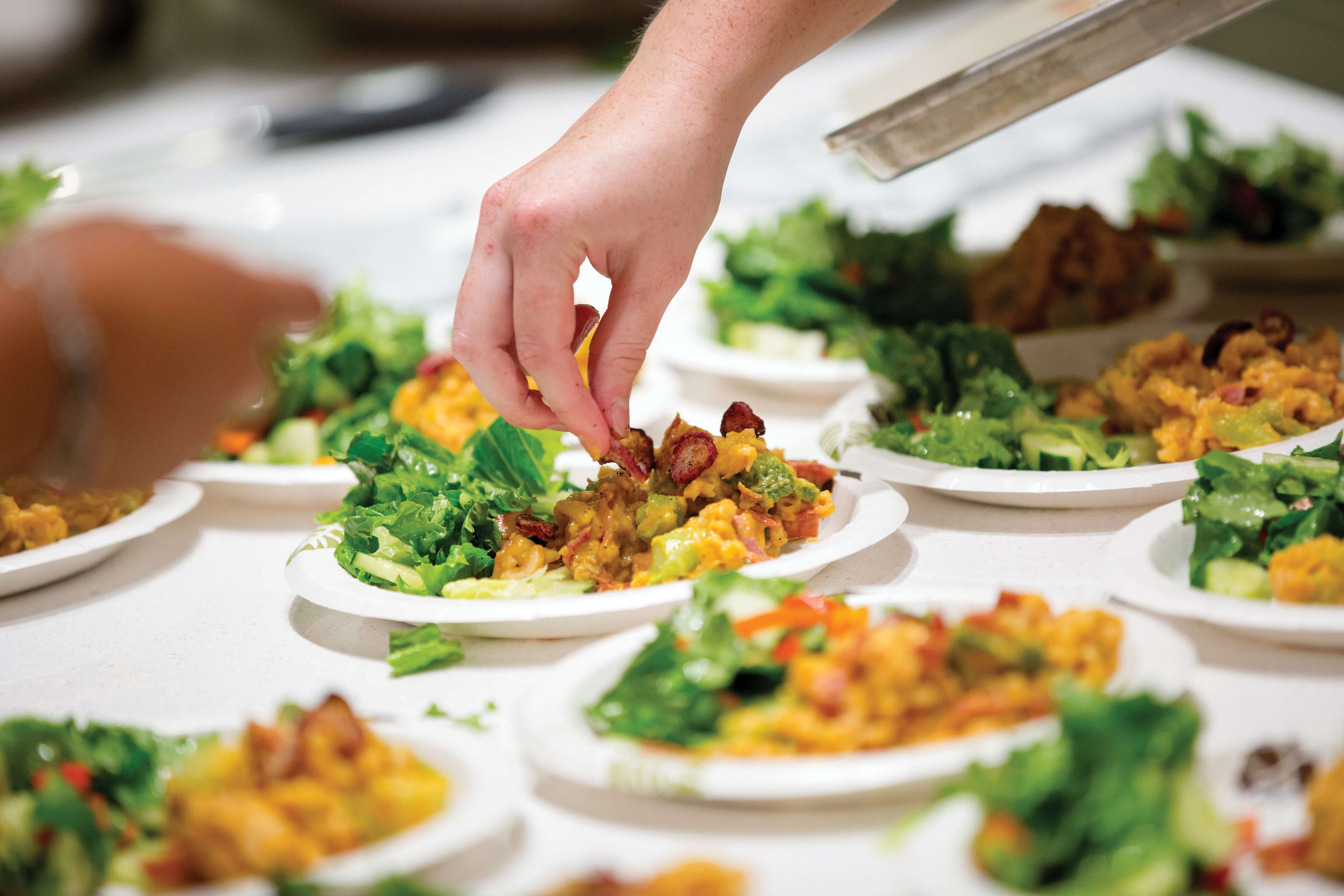 Spring was a bittersweet season for April Fuentes and her husband. When they found out they were expecting their second child—a girl, in November— they rejoiced. But in May, the couple learned that Fuentes’ father had stage four colon cancer, a diagnosis that would change more than one life.

“After my father was diagnosed, my parents watched Forks Over Knives and they told me to watch it,” Fuentes said. “It’s really eye-opening because it shows people who have diabetes and high blood pressure, and these people start only eating plant-based foods and their problems start going away. They don’t need to take diabetes medicine anymore.”

After watching the film, which explores the idea that many degenerative diseases can be controlled by rejecting processed and animal-based foods, Fuentes and her family decided to get healthy together.

It was not as easy as she had hoped.

“I was really nervous about cooking healthier food,” she said. “Living in Houston, it is a lot easier to stop at a taco stand or pick up a burger for dinner.”

At a routine check-up with her doctors, Darby learned about HE/AL. Healthy Eating, Active Living is a community health initiative started by Shreela Sharma, Ph.D., of The University of Texas Health Science Center at Houston School of Public Health, in collaboration with Phil Nader, M.D., a pediatrician in San Diego, Calif. For three years, Sharma and Nader have been working to create a clinic and community dedicated to solving health-related issues facing the local low-income population, including obesity and diabetes. In addition to learning about nutrition and exercise, participants take home fresh food from the Houston Food Bank after each meeting.

“Community health workers are sort of the bridge between the health care industry and the families, because they speak the language of the families and they are trained in health education,” Sharma explained. “The program creates a feedback loop back to the clinic and provider about what is going on with the patient when they attend this program.”

The six-week program Fuentes attends is geared toward expectant mothers in their first and second trimesters, but also encourages partners, friends and family of the mothers-to-be to participate. HE/AL also offers a program for new mothers and their infants that focuses on healthy goals and activities that can be incorporated into daily routines.

“When we first started HE/AL, I set two goals for myself,” Fuentes said. “One was to eat three servings of fruits and vegetables every day, and the other was to make healthier choices for myself. So instead of the fried chicken, it’s the salad or the chicken breast.”

During the weekly meeting, participants have a chance to share their stories and struggles, watch a cooking demonstration with fresh ingredients chosen by HE/AL dietitians, and exercise. Participants learn about the kinds of exercise that are safe during pregnancy and beneficial after babies are born, including yoga, aerobics, and exercises with resistance bands. All participants are encouraged to try the movements and techniques at home.

Esco Zepeda, HE/AL community health worker, helps HE/AL participants with day-to-day questions—including fielding 10 p.m. phone calls about how to make whole-wheat tortillas—and also serves as the fitness instructor. During a recent class, Zepeda moved through different aerobic poses and made sure everyone understood the benefits of the movements and how to have fun doing them.

“This is not a class, this is more of a facilitated conversation,” Zepeda explained. “We believe that a community will make a change when the information is coming from them, not when it is coming from someone they don’t know in the health industry. Little by little, we are just delivering information—like, try this new recipe, this new fruit, or this new vegetable.”

Each week the HE/AL program directors plan a healthy menu for the women, based on what is available at the Houston Food Bank.

“The first dish we had while I was in the class was the pink spaghetti,” Fuentes said. “Instead of using noodles, they used beets. I rarely eat beets and I loved it. They used beets and diced tomatoes instead of a thick sauce so it was all fresh and really good.”

After each meeting, the women are given 10-15 pounds of food from the food bank, based on what was prepared in class. This has made a huge impact on grocery shopping for Fuentes.

“I usually do my grocery shopping once a month because that is when I get paid, and then I don’t have to make tons of trips back,” she said. “Because of HE/AL, I really haven’t had to buy a lot of fruits and vegetables, because we get them every week.”

On a recent shopping trip to the Fiesta Mart in downtown Houston, Fuentes examined the fresh produce in the store before selecting her items.

“I love making salads, but I don’t buy iceberg lettuce anymore,” she said, pushing her cart slowly down the produce aisle. “I use spinach, because the iceberg lettuce doesn’t have a lot of nutrients. I also put tomatoes, cucumber, bell pepper and a little bit of shredded cheese for protein.”

The changes that Fuentes and her family have made in the last few months have not only improved her health during pregnancy, but they have also improved her father’s quality of life after his cancer diagnosis. He is currently finishing chemotherapy treatments in Austin and his doctors have said that the changes in his diet have helped his overall health.

“After the class ends, I know I will continue to eat healthy, but it’s sad the class has to end because I know there is so much more they can teach us,” Fuentes said. “The women are positive, successful. They care about us and our babies and they want to help make us do better.”