The Ties that Bind Them

The Ties that Bind Them 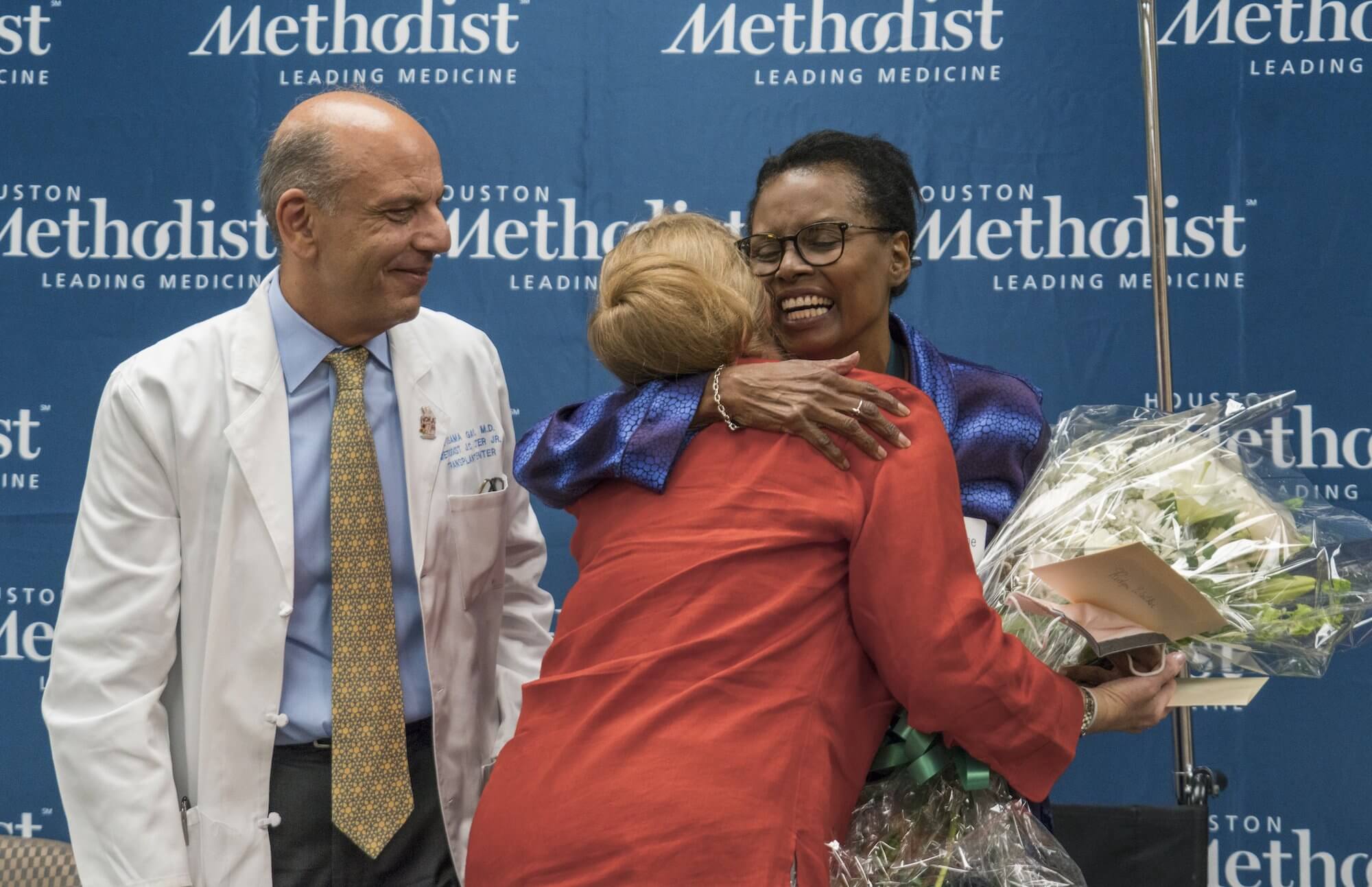 What began as a single altruistic act set off a domino effect that would change the lives of 12 strangers and culminate in the second-largest kidney swap to ever happen in a single institution in Texas. The 12 individuals gathered at Houston Methodist Hospital Monday for the revealing of the donors and recipients in the historic six-way kidney swap.

At the center of it all was Dana Edson, a registered nurse from Kerrville, Texas, who earlier this year was treating a woman she met in church. During a routine checklist of questions, Edson asked her if she had both of her kidneys. When the woman replied that she didn’t because she gave one 16 years ago to her son, Mark Ridgeway, who would need another transplant soon to replace the failing kidney, Edson decided on the spot to see if she would be a match for this stranger.

Although Edson turned out to be a match for Ridgeway, she had the opportunity to maximize the impact and reach of her act of kindness by donating her kidney to someone else. By doing so, A. Osama Gaber, M.D., director of Houston Methodist J.C. Walter Jr. Transplant Center, and his team were able to arrange for six donors to help save the lives of six recipients in desperate need of new kidneys.

While there are more than 1,400 patients currently on the kidney transplant waiting list at Houston Methodist, there are upwards of 9,000 people in Texas and nearly 100,000 people across the U.S. waiting for a kidney donation. According to the National Kidney Foundation, approximately 13 people on the list die each year while waiting for a kidney, and another person is added to the list every 14 minutes.

Because donors need to have compatible human leukocyte antigen types, ABO blood types and antibody makeups, orchestrating a kidney swap involving more than three donors and three recipients would be too complex. But thanks to an algorithm that was used to match individuals, the Houston Methodist team was able to orchestrate the six-way kidney swap over two months and perform the transplant surgeries on two days.

“Being a part of the [Texas Medical Center] and having the resources to do this allows us to take these people who would have otherwise not been able to get a transplant,” Gaber said. “This is not the first in the world, but I think there are so many people here and it’s just so touching. It’s all great. The ability to make things like this happen is fantastic.”

Edson’s kidney eventually went to Rudyne Walker, 71, who was diagnosed with sickle cell anemia in 1970 and stage 5 renal failure in 2015.

“I got from Dana a kidney that is young and vigorous and excited about life,” Walker said. “I haven’t had a kidney like that in 40 years!”

With Edson donating her kidney to Walker, the bond they now share transcends blood and corporeal organs. Walker wears a ring with the cross symbol, a gift given to her by Edson on the day of her surgery, while Edson wears a similar ring of two crosses and two hearts.

“Our crosses and our hearts are together forever,” Edson said. “These are bonds that will live with us for a lifetime, and I’m very proud of it.”

To each other, they are now and will forever be known as the “Kidney Soul Sisters.”

Houston Methodist performed its first transplant swap in 2008 and participated in a national 30-way kidney swap in 2011. As of today, the hospital has completed a total of 76 transplant swaps.