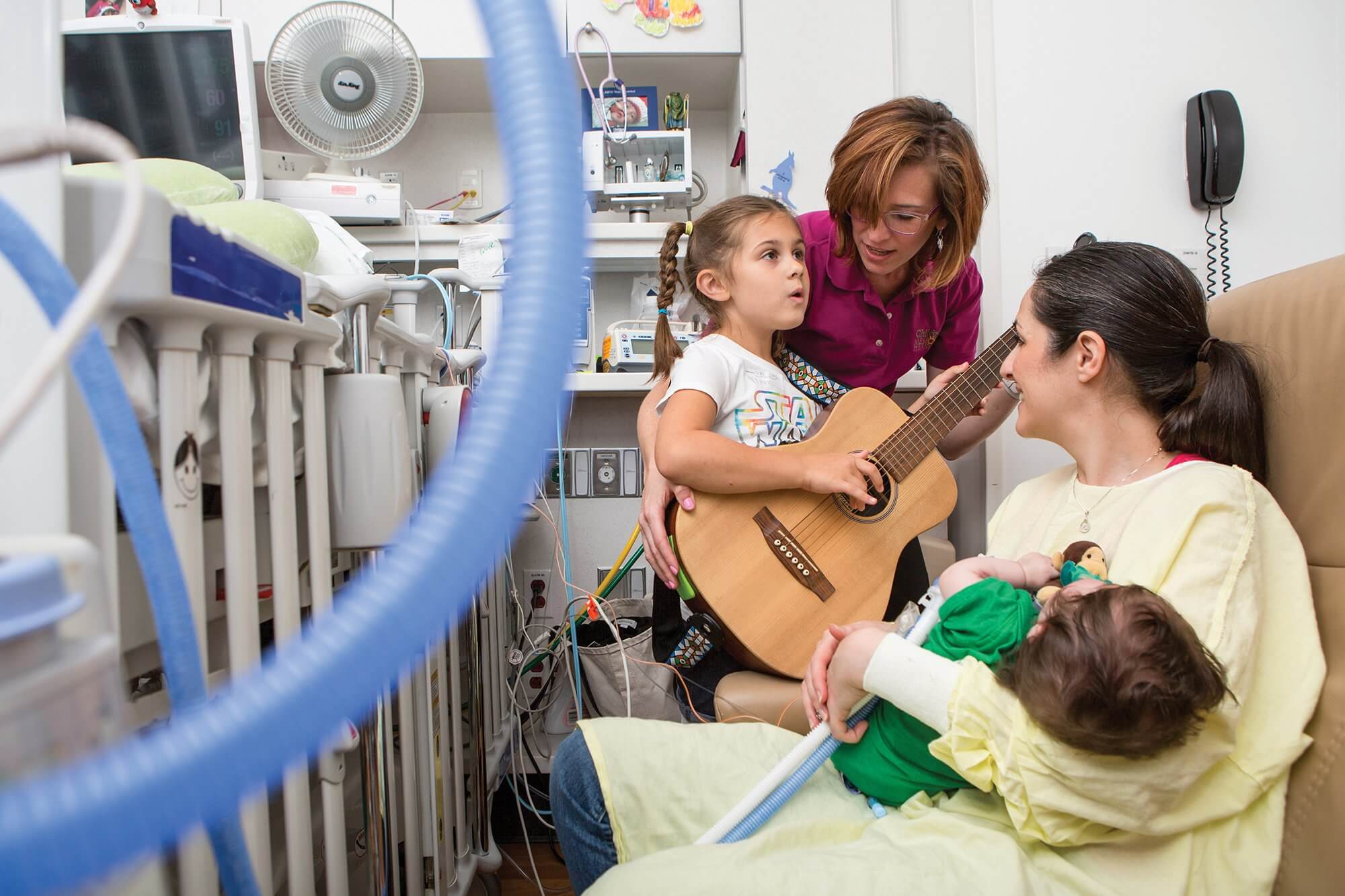 Neonatal intensive care units are never silent. Monitors beep and chime, respiratory machines whoosh while oxygen flows into developing lungs. Babies cry. For parents of patients who live in the NICU, these noises become a routine part of the hours spent at tiny bedsides. But several times a week at Children’s Memorial Hermann Hospital, soft melodies rise above the daily noise as senior music therapist Jennifer Townsend strums her guitar and sings for an infant audience.

On a Wednesday in mid-June, Townsend visits Patrick, an 11-month-old with a thick shock of dark hair. Patrick has been through a lot in his short life. Born at 29 weeks, “much smaller than they thought,” his mother said, Patrick arrived at Children’s Memorial Hermann Hospital via Memorial Hermann Life Flight just three days after birth.

“He was very sick, intubated for a couple of months, and then had a surgery that changed the course for him,” said Alissa Meyers, his mother. “He started improving, but 11 months later we’re still here.”

From an early age, Patrick showed an affinity for music. When he cried, nurses streamed lullabies for him on their phones, and he calmed down. Before beginning his own appointments with Townsend in February, Patrick’s first exposure to Memorial Hermann’s music therapy program was accidental, through one of the other babies in the NICU.

“Jen would come in and play for one of his little neighbors,” Meyers said. “I would hold him, and as soon as she would start playing and singing, his head would just whip around and he would watch. So every time she came in, we got music therapy, too.”

Music therapy for infants occupies the intersection of right brain and left brain, art and science. It involves much more than selecting songs at random. Townsend gets to know each of her patients intimately, learning their likes and dislikes in terms of song genres and playing styles. She helps her patients achieve goals that doctors have set for them.

“I’ve seen Patrick enough times that I just know about 120 beats per minute is where I need to play so that his respiratory rate is around the 60 mark, which is what the doctors have decided is the optimal rate,” Townsend said. “He responds better to finger picking.”

Much of Townsend’s work is based on entrainment—helping babies and older children synchronize with the music, emotionally and physiologically. Townsend likens it to listening to music while exercising: a favorite song starts playing and you begin running to the beat.

“We start with just voice, and then we add layers onto that to determine how much they can tolerate stimulation-wise,” she said. “We also assess from a vibrational standpoint. How close can I be to the baby? Can I put my guitar on the bed and they feel the vibrations through that? Can they even put their foot up against my guitar and get that tactile sensation?”

After months of working with Patrick, Townsend now knows what songs he responds to and what style of playing he prefers. She has also discovered an unexpected ally in Patrick’s music therapy treatment: his six-year-old sister, Avery.

Avery, a regular visitor to the NICU, is a ball of energy. She bounces around the room, alternately chatting and singing. And more than anything, she loves Patrick, who she calls “my cheeky little brother.”

“She’s been wanting a baby brother or sister for so long,” Meyers said. “For us to have one but not to be able to have him at home has been very challenging for us all, but her especially.”

Seeing Avery’s love for Patrick, often demonstrated by smothering him in kisses and singing to him, Townsend pulled her into Patrick’s therapy. Avery would strum Townsend’s guitar and they would sing together, which evolved into creating original songs for Patrick.

“We had a few sessions with Patrick where she would fill in the blanks of songs about him and different things like that, and that started to get her to organize her thoughts around him,” Townsend said.

Those sessions developed into a plan between Townsend and Meyers. As a surprise gift for Avery on her sixth birthday, they presented her with her very own ukulele from Patrick, complete with his footprint.

Avery’s smile said it all as she unwrapped the instrument, a book to teach her how to play and her very own tuner, just like Townsend’s.

As Avery marveled over her presents, her mother looked on, smiling, Patrick sleeping in her arms. With her son unable to leave the hospital for the past year and her vibrant kindergartner growing into a first grader at home, the balance for Meyers has been difficult. What hasn’t been difficult is fostering a bond between the siblings, which grew naturally from the start.

“The two of them are so in tune to each other,” Meyers said. “Usually when she’s here, he just looks at her adoringly.”

Townsend has also noticed how both children perk up when they’re together.

For now, as doctors work to help Patrick grow stronger, Avery will continue writing songs for her brother and strumming along on her special gift.

“I hope Patrick will feel happy with what he got for me because I love it, and I hope that I can always remember his foot on the guitar,” Avery said, smiling at the purple footprint.

Meyers hopes Avery, who first sang to Patrick while he was in utero, will continue to be inspired by Townsend and music therapy.

“I think they are going to be very close, and if she continues playing and learning, it will become something they can do together,” Meyers said. “And we can get him his own ukulele when he’s older.”