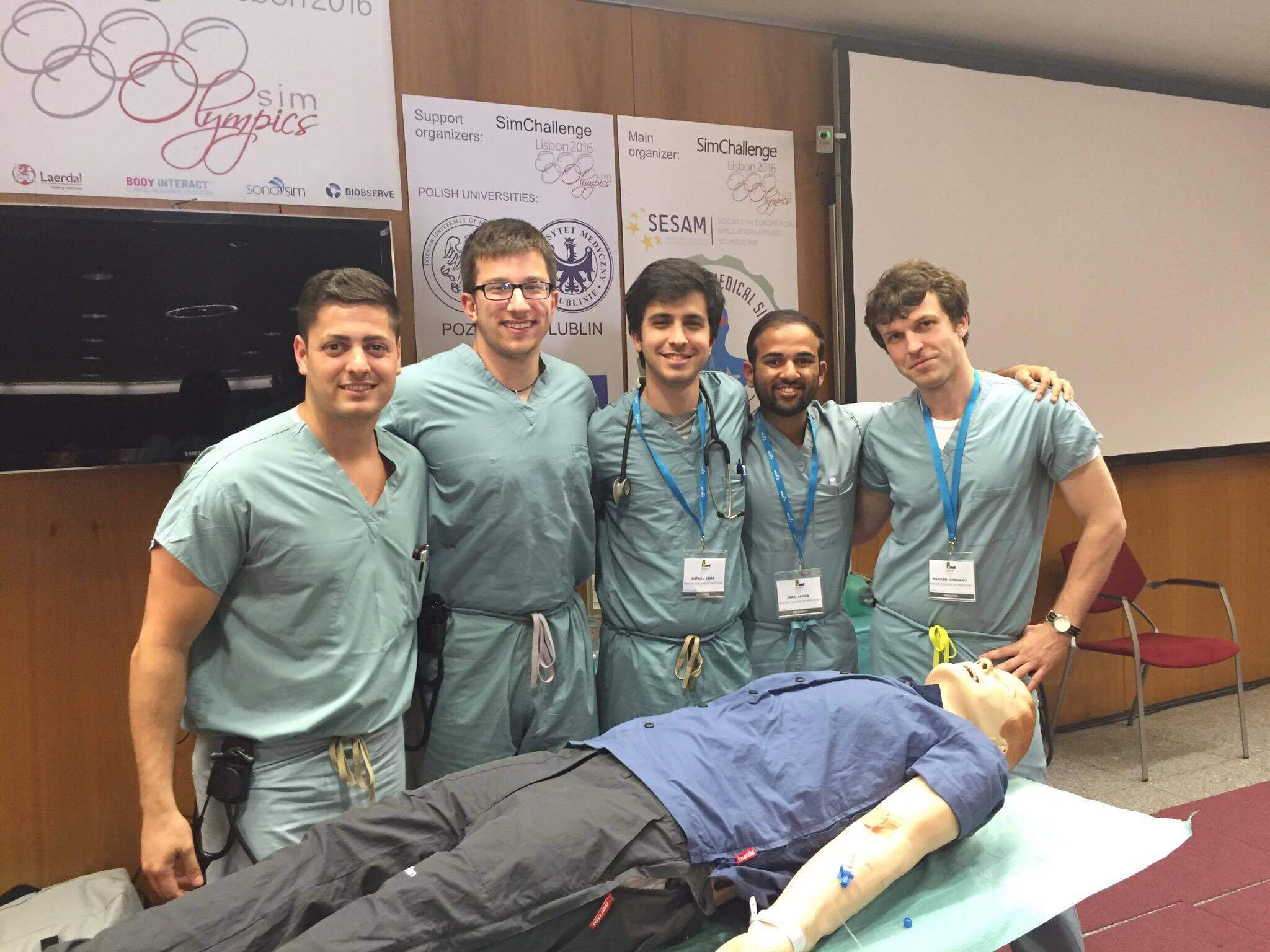 Baylor medical students have a history of strong finishes at the international Simlympics competition, and this year’s team continued the tradition. But for the five medical students on the team, participation in Simlympics offers more than the chance to win a trophy – it’s an important component of their medical education.

This year’s team – Andre Critsinelis, Jared Mortus, Rafael Lima, Jake Jacob and Hayden Hibbard – finished third in the international competition, held in June as part of the 22nd annual meeting of the Society in Europe for Simulation Applied to Medicine in Lisbon, Portugal. They all were first-year medical students at the time, competing against other teams that included upper level medical students and even residents.

Their preparation for competition started last fall with biweekly meetings of the BCM Sim Society, where learning materials for first-year medical students were incorporated into simulation cases. Beginning in January, these meetings went from classrooms to the BCM Surgery Simulation Center, where the department of surgery allowed students in the Sim Society to use some of their simulation equipment, including the Sim Man mannequin – the same mannequin used in competitions – as well as other high-fidelity equipment.

The five teammates also met every week to run through additional practice cases, work on closed-loop communication skills and prepare presentations on a specific condition they might encounter. As competition season approached in the spring, they ramped up their preparation by completing Basic Life Support certification, and Critsinelis and Mortus also earned Advanced Cardiac Life Support certification, typically completed in the fourth year of medical school. They also read the entire Advanced Trauma Life Support manual, normally done by first- and second-year residents.

While their training was rigorous and went above and beyond the required first-year medical student curriculum, it was rewarding for the five team members.

“All of us were really drawn to simulation as an educational modality because it offers us an opportunity to apply what we learn in the classroom to a real-life scenario, thus bringing life and importance to every aspect of our education,” Critsinelis said. “Through simulation we’ve been able to truly appreciate the importance of other aspects of health care such as open communication and working as a member of a team.”

The international event was also a learning experience that offered the students a unique look into the world of simulation as a supplement to more typical education methods. They got to see the newest high-fidelity mannequins used by the military to train trauma surgeons, practiced procedures using state-of-the-art technology such as the Da Vinci surgical system and, most important to them, test out technology that will start being used for undergraduate medical education in the near future, such as Virtual Cadaver Dissectors and 3D Ultrasound devices.

“The competition itself pushed the limits of our knowledge and really tested how we stayed together as a team,” Critsinelis said. “If you ask any member of our team what their favorite part of the trip was, I think we’ll unanimously say it was getting to run through the very last scenario in the finals. While we were all expecting a mannequin, we were faced with an actual person lying on the table, wearing a ‘Cut Suit’ that allows students to actually perform acute surgical procedures like cricothyrotomy and inserting a chest tube. In that case, a patient presented in critical condition from an explosion in their home. We had to work quickly and in unison in order to stabilize the patient, addressing the most immediate life-threatening problems which involved inserting a surgical airway and placing a chest tube, as well as quickly adapting our differential diagnosis to identify the underlying cause of his presentation.”

To qualify for the international competition, the students took first place in the Baylor-hosted simulation competition for teams within the Texas Medical Center. They also placed third at the 2016 Texas College of Emergency Physicians Conference competition. This year’s team received support from Dr. Tyson Pillow, assistant professor and medical director for Baylor’s Simulation and Standardized Patient Program and faculty mentor of the Sim Society, as well as from Dr. Shehni Nadeem, a resident, and former team members Sam Buck, Jake Valentine, Andrew Kohner, Luis Fernandez, Evan Strobelt and Saagar Patel.