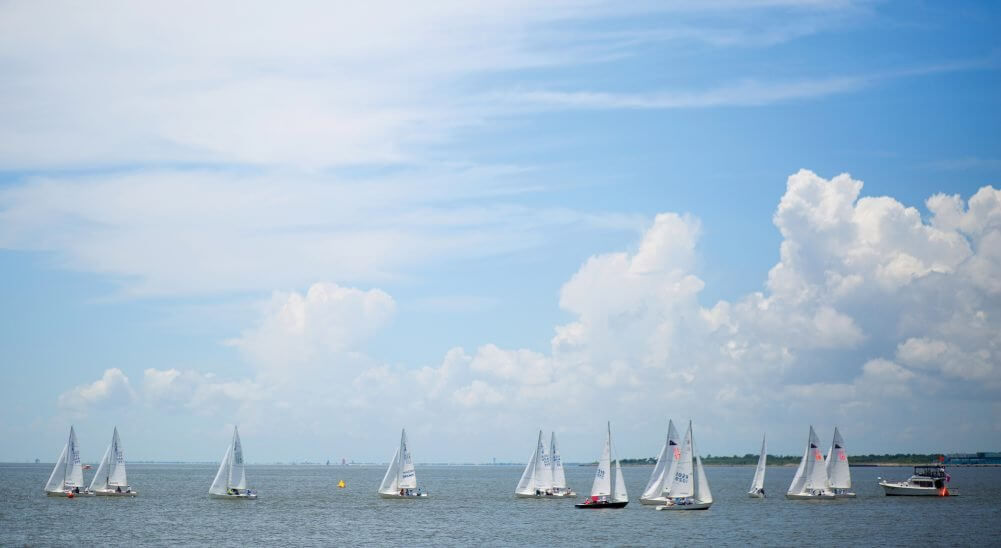 When Brenda Cheney was diagnosed with stage two Hodgkin’s-lymphoma, two large tumors had already grown in her chest cavity.

One way Cheney gives back is through the Leukemia Cup Regatta, which began nearly 30 years ago at the Pine Harbor Yacht Club in Birmingham, Alabama, and has since grown into an annual fundraising event at yacht clubs around the country.

Cheney has been involved with the regatta for the past nine years and has raised more than $130,000 for the Leukemia and Lymphoma Society through “Sip and Sail for a Cure.” She sits on the society’s board of trustees. Jim and Allison Orchid started the Houston Leukemia Cup Regatta at the Houston Yacht Club in 1998, in memory of Jim’s brother who died from leukemia at the age of 17.

This year’s regatta, which ran from June 24 to 26, drew 55 teams to Galveston Bay. Sailors of all ages, backgrounds and experiences participated.

Cheryl Thomas, a lifelong sailing enthusiast and former Lady Commodore of the Houston Yacht Club, has been in charge of the annual regatta for the past 15 years.

“My sister, Claudia Sparks Cannon, died of lymphoma 20 years ago, and my family and I have been involved with the Leukemia and Lymphoma Society ever since,” said Thomas, who sits on the society’s board of trustees. “Sailing has always been a family tradition for us so the Leukemia Cup Regatta has been a great way for us to honor Claudia’s memory.”

The University of Texas Sailing Club traveled from Austin to be part of the regatta, bringing seasoned and new members.

“This was our first time sailing in the regatta, but we plan on making it an annual event because it is a great opportunity for our club to get people out on the water, learn how to sail and raise money for a great cause,” said Chris Jansson, UT Sailing Club Commodore.

As the sailors raced throughout the weekend, the Leukemia and Lymphoma Society invited local patients who are currently being treated for blood cancers at The University of Texas MD Anderson Cancer Center and Texas Children’s Hospital to watch the races from a spectator boat provided by Kirby Marina. Passengers were entertained by rodeo clowns.

Erin Cones and her family were invited because her son, Crew, is battling leukemia and receiving treatment at Texas Children’s.

“Crew was diagnosed with leukemia one year ago, and at that time I didn’t even know exactly what leukemia was,” Cones said. “Since that day, my family and I and our friends have become incredibly involved with the Leukemia and Lymphoma Society in the hope that they can fund research that will cure all types of blood cancers.”

The society provides resources for patients undergoing treatment and has a research program that helps translate research findings into meaningful health outcomes, said Helen Heslop, M.D., principal investigator for a Leukemia and Lymphoma Society Specialized Center of Research (SCOR) award on immunotherapy of hematologic malignancies, and Director of the Center for Cell and Gene Therapy at Baylor College of Medicine Houston Methodist Hospital and Texas Children’s Hospital.

Currently, 1.13 million people in the United States are living with or are in remission from a blood cancer, according to the Leukemia and Lymphoma Society. Leukemia and myeloma grow within the bone marrow and can interfere with the production of normal white blood cells, red blood cells and platelets. Failure to produce normal blood cells can cause frequent infections, anemia and easy bruising. Lymphomas, which most typically appear as an enlargement of the lymph nodes, can also interfere with the body’s ability to fight infections.

“I think it is so important that we as parents follow our intuition and request testing when things do not seem right with our children,” Cones said. “I am so thankful that I did request blood testing for my son and that he is now in maintenance. I hope that the work the Leukemia and Lymphoma Society is doing allows doctors to do their jobs to the fullest and have access to the best tools and information possible.”

The Leukemia Cup Regattas around the country have raised more than $50 million to benefit the Leukemia and Lymphoma Society. The local regatta has raised nearly $3 million over the past 18 years that has gone to the society’s Texas Gulf Coast Chapter.

The funding received by Heslop and her research team has allowed them to work on developing new immune therapies for patients. Targeted immune therapies minimize the amount of toxicity to which patients are exposed.

“Sailing is in my blood and it is a family tradition for me,” Thomas said, “but I am so proud that through efforts like the Leukemia Cup Regatta, researchers have been able to create targeting drugs that could have saved my sister’s life.”