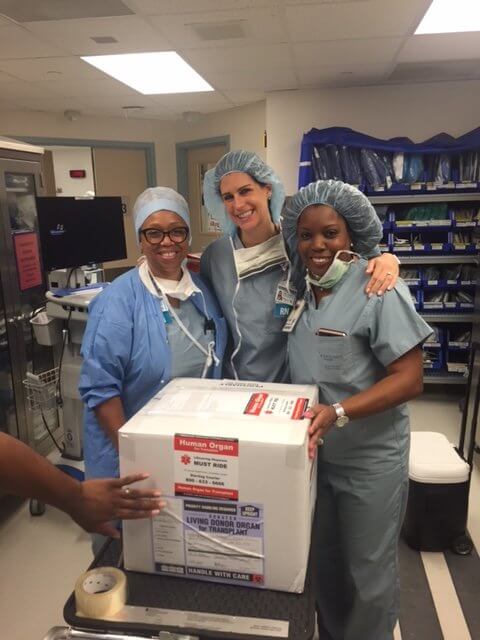 “This is a significant achievement for Baylor St. Luke’s transplant team,” said Christine O’Mahony, MD, Kidney Transplant Surgical Director, Baylor St. Luke’s Medical Center. “A lot of time and coordination went into making this five-way swap a success. I’m proud that we were able to play a role in giving strangers the gift of life.”

Here’s How the Swap Worked

Facilitated by NKR, the living donor swap takes a group of incompatible donor-recipient pairs (recipients coming to one of the four hospitals with a willing donor who is not compatible by blood or tissue) and matches them with other pairs in a similar predicament. By exchanging kidneys between the pairs, it is possible to give each recipient a compatible kidney. In this way, each recipient receives a kidney from a stranger, and transplants are enabled that otherwise would not have taken place. Involving multiple hospitals creates more possibilities for matches.

“With so many people waiting for so few available organs, patients can wait up to six years for a cadaver kidney transplant. Nearly 100,000 people are on the kidney transplant waiting list,” said Joe Sinacore, Director of Education and Development at the National Kidney Registry. “The living donor swap match program seeks to address the acute shortage of organs by enlarging the pool of living donors who want to donate a kidney to a family member or friend, but can’t due to issues such as incompatible blood types.”

Local Father and Daughter Participate in Swap Together

John Wall Jr., of Houston, received a liver transplant at Baylor St. Luke’s in 2009. Shortly after the transplant, his kidneys began to lose function. Originally, Wall underwent six months of dialysis before starting again in February 2015. His doctors informed him that he would need a kidney transplant. Unfortunately, he was not a match with his daughter, Megan Deen of Fort Worth, due to the high antibody levels in his blood. Wall’s blood had changed after the series of blood transfusions he had received over the years. Luckily for Wall and his daughter, Baylor St. Luke’s introduced them to the living donor match system through NKR and they were placed in a multi-center swap on June 29. Deen donated her kidney to a recipient in Madison, WI., while Wall received a kidney from a donor in Peroria, IL.

“I’m very thankful that the Baylor St. Luke’s transplant coordinators introduced us to the idea of the swap program after not having a positive match in our family,” said Wall. “It feels wonderful to have a new kidney. Attending dialysis three times a week ties you down. I have a sense of relief knowing that no longer have to worry about treatment and can spend more time with my family.” Wall’s daughter added, “The entire Baylor St. Luke’s team was incredibly supportive throughout the process. I not only had the opportunity to give my dad a better quality of life, but improve another person’s life as well.”