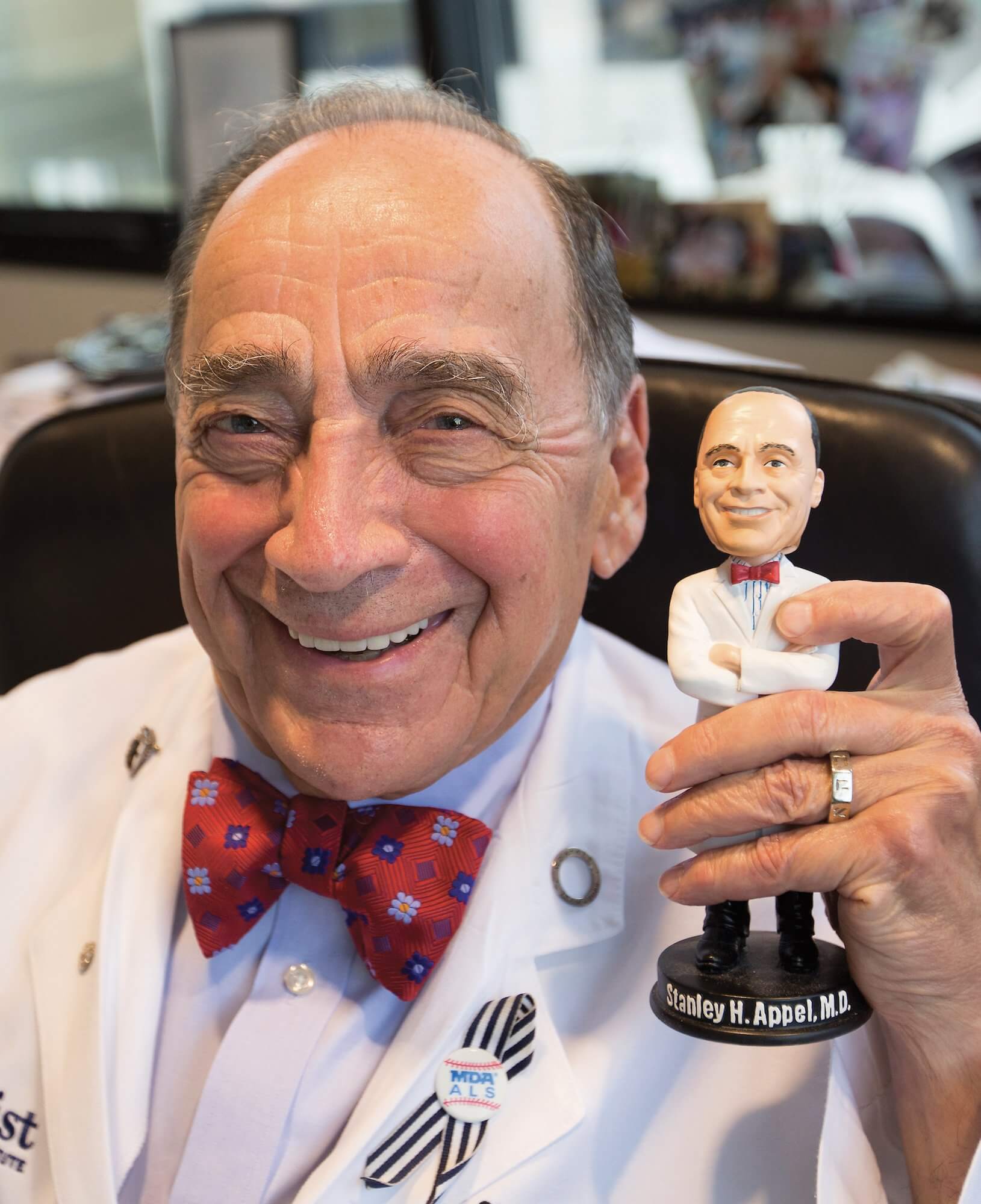 When Stanley Appel, M.D., walks into a room, he greets you with a genial smile and bushy eyebrows. But behind that kindly demeanor is a doctor who has mentored hundreds of residents over a 40-year career, a man who has pushed and challenged young doctors to the limits of their abilities.

After completing his undergraduate education at Harvard, Appel enrolled at Harvard Business School for his MBA. But late one evening in a Beacon Hill bar, he realized he wasn’t interested in a business career. Instead, he was driven by an innate curiosity to understand the inner workings of the human brain.

Now a renowned physician-scientist, longtime chair of Houston Methodist Hospital’s Department of Neurology and director of the Neurological Institute, Appel, 83, is best known for his work in amyotrophic lateral sclerosis (ALS), Alzheimer’s Disease and Parkinson’s Disease. He has published 15 books, written hundreds of research articles and cared for thousands of ALS patients through his MDA/ALS Clinic, the first multidisciplinary ALS care center in the country.

“What drives the passion is the sense of hope you instill in people,” Appel said. “Anyone who starts working with us in taking care of these patients … gets sucked in because these people are just incredible. They’ve taught us all so much. How to live and how to die.”

The standard life expectancy of ALS patients ranges from three to five years, according to the Muscular Dystrophy Association, but new technology and treatments are helping patients live longer. Appel recounted stories of ALS patients who camped in national parks and traveled the world. One jazz musician patient continued to write music using only his eyes. That’s what Appel called the “brain in solo flight.”

“What do you do if it was just your brain and you didn’t have to worry about your body because there is nothing there?” he asked. “What would you do to maximize the pleasure to the brain?”

Appel and his team aim to improve their patients’ lives and return to them a sense of hope, but Appel gives most of the credit to his patients.

“We feel comfortable that we’re giving back,” he said, “but we’re getting more back from them than we’re giving.”

Expectation for Excellence
Appel’s standard uniform, a white lab coat, is often paired with a bow tie and cowboy boots. The Boston native didn’t adopt cowboy footwear to assimilate to Houston, where he moved in 1977. His decision to wear Olsen-Stelzer boots was born of function, not fashion: he needed support for his flat feet.

In Houston, Appel’s personal passion for neurology and dedication to patients translated to a rigorous, no-nonsense teaching philosophy that instilled a tenacious curiosity in his residents without sacrificing bedside manner.

“[He] may never find a cure for ALS, but the number of residents he has trained is phenomenal,” said Joan Appel, his wife and physician assistant. “Many of them go on to be chairmen and they all come back and love him. Even though he’s tough on them when they’re here, they appreciate it when they [leave].”

One of Appel’s former residents, Ericka Simpson, M.D., considers him a somewhat intimidating “giant of neurology.”

“My stories [of him] are of fear and intimidation—not that he was ever malicious,” said Simpson, neurology residency program director at the Houston Methodist Stanley H. Appel Department of Neurology, which was recently named in Appel’s honor. “Dr. Appel has mellowed over the years, but no matter how he’s mellowed, there’s always this expectation for excellence. He will push you to that and you want to meet it. I wanted to be pushed. I wanted to be challenged. I wanted to be afraid. … Nice is good, but there is something about being pushed and challenged and placed in an uncomfortable position because you end up being better.”

Simpson studied under Appel from 1996 through 2001 for her residency and fellowship, and continues to be “tied at the hip” to her mentor. They collaborate on trials, co-author papers and co-direct his MDA/ALS Clinic. She attributes his legacy to his ability to lead, inspire and, most of all, relate as a genuine “people person.”

“He’s able to convey to the family and to the patients in such a gentle way, answer questions with elegance, respect and honesty,” Simpson said. “Not only did you see him as a great clinician and teacher, you also saw him with the bedside manner and ability to bring hope and confidence and a sense of security during such a scary time. He was a master of it all. You’re just so impressed to see it, but then you also feel very special to be a part of it.”

Karen Toennis, the MDA/ALS Clinic coordinator whose late husband was treated by Appel for ALS, recalls Appel’s humanity and kindness during an early appointment. Her then one-year-old son climbed onto Appel’s lap and played with his calculator watch as Appel explained her husband’s diagnosis.

“He has the ability—with his knowledge base, his research and being such a great technician—to be a phenomenal clinician in terms of deciphering what’s going on and also a compassionate doctor,” Toennis said. “With the bedside manner he has with patients, you wouldn’t expect it from somebody of his stature.”

The Greek Islands
Appel is still engaged in academic pursuits, with piles of research documents awaiting perusal on his cluttered desk. He is currently collaborating with The University of Texas MD Anderson Cancer Center to research the immune system as a way to modulate the expression of ALS. His team recently extracted damaged regulatory T-cells from patients, modified the cells to restore their protective function and re-infused them to enhance the patient’s protective immunity.

“Is it a chance to cure ALS? I doubt it, but we’re going to do this like triple therapy has treated AIDS,” Appel said. “It doesn’t cure AIDS, but [it] changed AIDS from a death sentence to a sentence of live your life and you can live for many, many years with this therapy.”

As researchers hunt for a cure for ALS, Appel and his team continue to convert advances in research into therapies for patients.

“We’re going to [find a way] before we leave this planet,” he said. “We’re going to make a difference, in addition to the difference we think we’re making now. When any place in the world solves this problem, then Joan and I are off to the Greek islands, either Mykonos or Santorini.”