Surviving cancer is a feat in itself, but for many, thriving after treatment is another battle 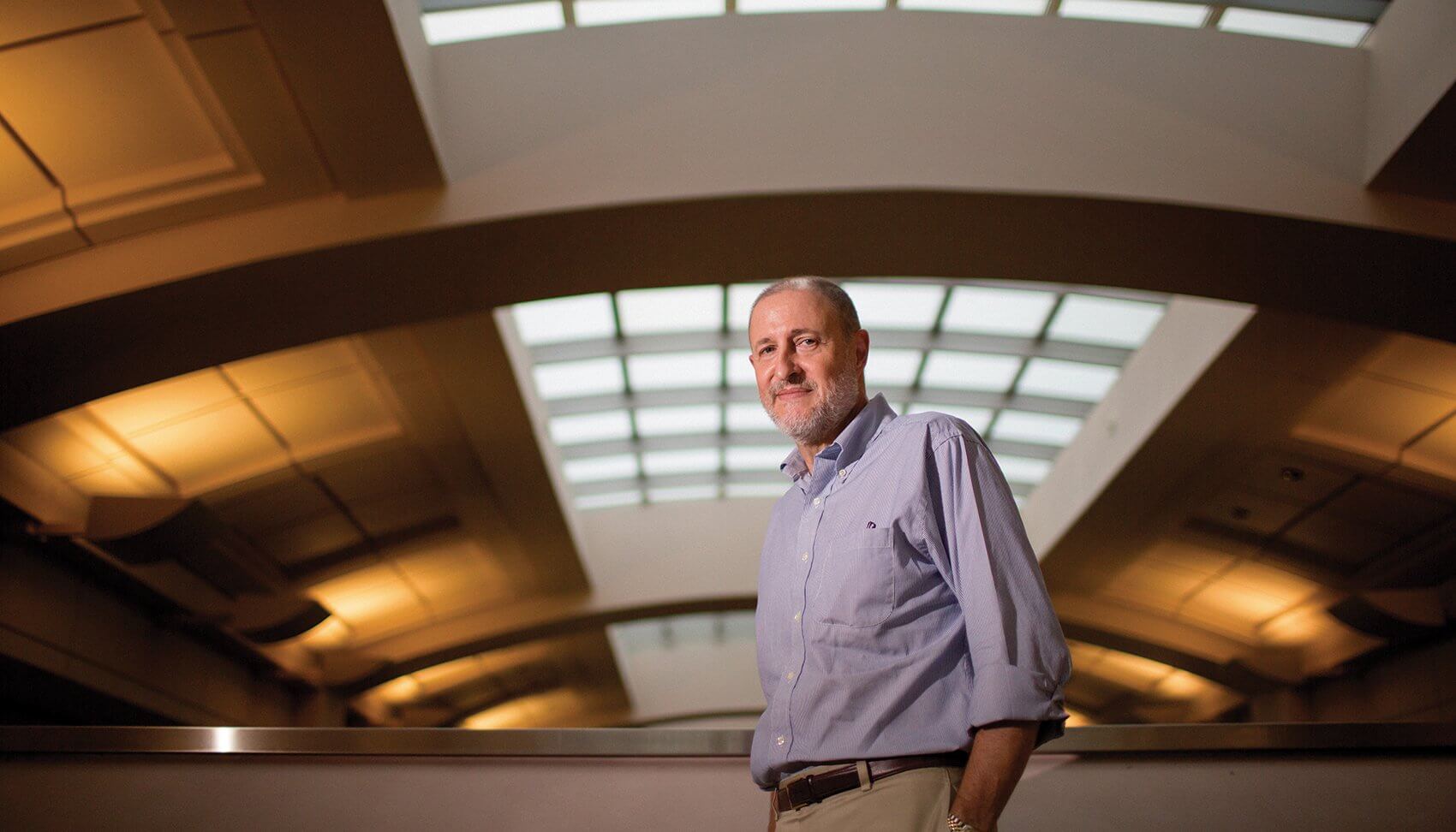 While much of the media and public attention focuses on exciting new horizons and breakthroughs in cancer research and treatments, one cancer-related topic in particular has been pushed off to the periphery of medical discussion. However, over the past 18 years, Carmelita P. Escalante, M.D., professor and department chair of general internal medicine at The University of Texas MD Anderson Cancer Center, and Ellen Manzullo, M.D., clinical deputy division head of Internal Medicine at MD Anderson, have led the charge to alleviate this potentially debilitating and common symptom of cancer.

“Fatigue is the most common and distressing symptom in cancer patients. This is a fact that is really not well known,” said Manzullo, who evaluates and treats patients at the MD Anderson Cancer-Related Fatigue Clinic along with Escalante. “A lot of times, when patients come to our institution, the focus is really on the treatment of the cancer, so many times the fatigue is the backdrop. A lot of times, clinicians are very busy and they’re not able to really focus on that.”

“It’s a very prominent symptom, and patients now are surviving longer and doing better, either without cancer or with cancer as a chronic disease, but this symptom can be prohibitive in their daily activities,” Escalante added.

Since its inception in 1998, the Fatigue Clinic, which comprises a modest three-person team of Escalante, Manzullo and a clinic nurse, has treated more than 2,500 patients to help alleviate the burden of cancer-related fatigue. Using a qualitative “brief fatigue inventory” measurement tool developed by Charles Cleeland, Ph.D., McCullough professor of cancer research in the department of symptom research at MD Anderson, shortly before the clinic opened its doors, Escalante and Manzullo were able to assess the severity of patients’ fatigue that, for a long time, wasn’t always at the forefront of patient care discussions.

“Fatigue is very nonspecific, and it’s not like blood count or hemoglobin where you can get a blood test. We needed some type of measurement so that, if we implemented interventions, we would be able to measure it and see on a follow-up what was happening to the patient’s fatigue,” Escalante said. “Using that measurement tool, we were able to develop or begin the clinic and focus on fatigue, which, at that time, patients weren’t talking about as much as now.”

Patients typically experience worsened fatigue during their chemotherapy or radiation therapy, but cancer-related fatigue often continues even after the treatment concludes, potentially lasting anywhere from months to years.

“It’s not only physical, but it’s mental and emotional, and it’s not relieved with usual rest,” Manzullo said.

While normal fatigue is characterized as a state of temporarily feeling physically and cognitively exhausted with less energy throughout the day, cancer-related fatigue persists for longer periods and interferes with people’s daily life because it leaves them with little to no energy to perform simple, everyday tasks, such as eating or even using the bathroom.

“During the chemotherapy, [the fatigue] was very severe,” said 60-year-old pancreatic cancer survivor Jorge Albin, M.D., adding that although he tolerated the chemotherapy treatment well and the fatigue associated with it improved, the unrelenting fatigue never went away completely. “Getting out from the bed and to the couch and back to the bed was [considered] a very good day, and it got to the point where getting up to pee was a major ordeal.

“Sometimes the fatigue gets you, grabs you by the back and you just have to stop. [It feels like] there’s nothing you can do,” he added.

Albin, who retired from his career as the head of radiology at St. Joseph Hospital when he was diagnosed with pancreatic cancer, was referred to the Fatigue Clinic in 2010 and was put on a daily regimen of Ritalin and exercise, which consists of walking his two dogs—a Bichon Frise and Labrador-pit bull rescue—for three miles in the morning and one mile in the afternoon.

“[The fatigue] improved, but I was left with being able to do things for half an hour and maybe an hour , [then] rest for two or three hours. I had two or three episodes of that a day and that was it,” Albin said. “The only thing that really makes fatigue better is exercise. If I don’t do the walk in the morning, I am substantially more fatigued during the day.”

According to Escalante and Manzullo, exercise is one of the best interventions for cancer-related fatigue. They encourage patients to aim for 150 minutes of activity a week, or 30 minutes five days a week, and adapt workouts to daily routines. For instance, Escalante suggests using canned foods from the pantry to exercise the arms, parking farther away to get in more steps or walking up and down the aisles of the grocery store or the mall while running errands.

“It’s kind of contradictory: You’re telling me you’re tired and I’m going to tell you to go and exercise,” Escalante said. “We really don’t understand how it works. Whether it’s the release of endorphins in the brain, who knows? But the bottom line is there have been a number of studies [that] all showed improvement in fatigue and improvement in quality of life.”

In addition to consistent exercise, Escalante and Manzullo said behavioral methods, such as prioritizing and dele- gating, are also integral components in treating cancer-related fatigue because it allows patients to conserve and ration their energy throughout the day.

“I ask them to put together a calendar of the days of the week and their tasks and try to divvy it up so that everything’s not just in one day,” Manzullo said. “[I encourage] them to try to do the harder tasks when they have the most energy, so sometimes a fatigue diary is helpful to figure out what part of the day is better.”

Although Albin’s fatigue improved to the point where he now has two- to three-hour periods of activity, he’s meticulous about not overexerting himself, which he said has transformed his daily life.

“It’s a smaller life. It’s a more limited life,” Albin said. “I used to do 12-hour or 14-hour days, come home, walk the dog, cook, have fun and read. We would travel once a year or every two years, but now I don’t want to travel because it’s too fatiguing. I usually get up at 7, walk the dogs, and I’m usually done by 8:30. It’s a very limited life. I think it’s a very good life, I won’t complain, but it is a different life.”

For 53-year-old Christina Cooper, who was diagnosed with primary myelofibrosis—a chronic bone marrow disorder that impairs the production of normal blood cells—in March 2010 and suffers from hypothyroidism, her cancer-related fatigue also meant having to give up her active lifestyle.

“I have a reservation on my couch at 2:00 in the afternoon. I cannot get off of the couch in the afternoons,” Cooper said of her fatigue, adding that she also experienced confusion and difficulty focusing. “I started noticing things like I’d do a recipe and I’d leave half of the stuff out or I’d be cooking multiple things and I’d burn something, or two or three days later I would look at something and go, ‘Why did I do that?’

“Anything after 2:00 I didn’t trust, really. I kind of lost trust in myself because I was messing things up and
I couldn’t do things,” Cooper said. “Sometimes I would be so fatigued that in the evenings, I really couldn’t even talk. Couldn’t get words out, especially if I had pushed myself in the mornings to get a bunch of stuff done.”

After being treated for her cancer by Srdan Verstovsek, M.D., Ph.D., section chief of myeloproliferative neoplasms in the department of leukemia at MD Anderson, Cooper went to the Fatigue Clinic where she, like Albin, was put on Ritalin to increase her energy and concentration levels, as well as an exercise regimen of practicing yoga twice a week, Pilates once a week and a goal of 10,000 steps a day. With the medication and a more conscientious approach to managing her day, Cooper said she has since been able to regain control of her life.

“Dr. Verstovsek gave me my life, but [the Fatigue Clinic] made me a person again,” Cooper said.

While the Fatigue Clinic continues to treat new cases of cancer-related fatigue, Escalante and Manzullo are keeping their eyes toward the future, whether that entails more research on the pathophysiology of fatigue to develop targeted therapies for it or predicting what subset of the population may be at risk, in an effort to improve the lives of their patients beyond cancer treatment.

“It’s actually a challenge seeing these patients, but it is also very rewarding because we have the chance to really have a significant impact on their daily living,” Manzullo said.