Fellowship With a Future

Fellowship With a Future 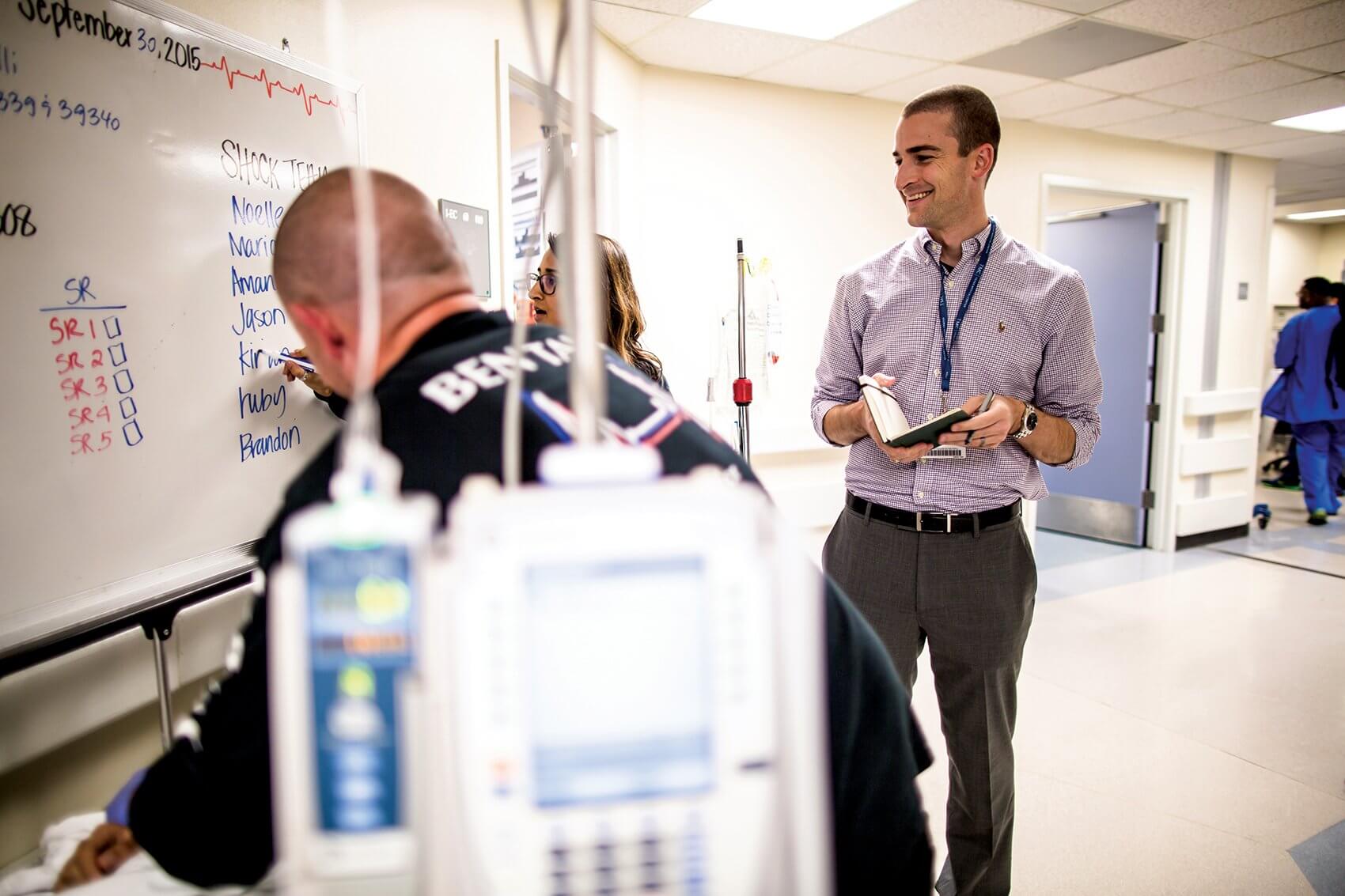 The to-do lists, clinical notes and desk clutter within IntuiTap Medical’s office space in TMCx+ tell a story of how the four-person medical device team is bringing their first product to market.

But what the dozens of Post-it notes lining the walls don’t reveal is that a year ago, IntuiTap Medical didn’t even exist.

Their product, a device that increases the accuracy of spinal taps, was one of more than 400 unmet needs their team, along with four members of the digital health team in the inaugural class of the TMC Biodesign fellowship, learned about during the program.

This talented group of eight individuals came from diverse backgrounds and were selected from more than 500 applications to create digital health solutions and new medical devices as part of the Biodesign process, an established methodology for streamlining innovation developed by Paul Yock, M.D., at Stanford University.

Each team is brought together based on primary role types, said Sandeep Burugupalli, business strategist for the TMC Innovation Institute. One is the organizer: the person who helps meet the vision for the team and keeps the team on track to meet developmental milestones. Another is the researcher: the person who looks at clinical and engineering literature and helps create a foundation of knowledge to help the team make strategic decisions. The third person is clinical: the one with medical expertise, who understands the clinical processes. The fourth is the builder: a highly skilled engineer or software developer who is primarily responsible for prototyping the solution.

“We tweak that basic model for each team and we expect that the roles will blend over time,” Burugupalli said. “The ‘X factor’ is they are all highly entrepreneurial people who are able to see unique opportunities and be resourceful.”

The three-part process had the fellows spending more than 400 hours making observations during the “identify” stage; narrowing down unmet needs and coming up with solutions during the “invent” stage; and finally getting the solution to market, or close to it, in the “implement” stage.

Having seen the Biodesign process up close while a professor and chairman of the Department of Cardiothoracic Surgery at Stanford University School of Medicine, Robert C. Robbins, M.D., now president and CEO of the Texas Medical Center, was eager to implement it locally.

“The Biodesign process is a teachable discipline and meant to be an educational program in which the fellows go through the clinical environment and look at everyday problems that need solutions,” he said. “We have the entire Texas Medical Center for the teams to experience: 8 million patient encounters across 9,000 beds.”

He sees the program not just as an academic exercise, but a real venture into the world of entrepreneurship that combines traditional Biodesign innovation principles with business formation concepts, encouraging fellows to not only consider disease state analysis, operational heuristics, human factors, and regulatory and reimbursement components of their ideas, but also product market fit, pricing, sales, marketing and distribution as well.

“We learned a lot from this experience,” said Shawn Dimantha, a fellow who came into the program with a background in digital health entrepreneurship and venture capital. “We found over 500 unmet needs from just one hospital.”

“Health care professional turnover and engagement might not be as trendy of an area in health care, but it is a real need that stakeholders and advisors also saw as a recurrent theme,” he added.

After doing its needs assessment, the medical device team, IntuiTap, entered its “implement” stage in March and was already pitching to investors by May and June. This led to being chosen in June as one of 20 companies for the MedTech Innovator virtual accelerator program.

Nicole Moskowitz, chief technology officer of IntuiTap, entered the program with a background in biomedical engineering and medical device development. She also found the clinical rotations and physician shadowing most useful and unique.

“It’s really not something you get to do outside of medical school,” she said. “Observing a surgical procedure, even once a clinical need was identified, was nearly impossible. So, it was truly incredible to have that opportunity for months.”

Narrowing down the needs was one of the challenges, Moskowitz said, because so many of them stood out but weren’t necessarily right for a commercializable product. The team decided to focus on spinal taps, a diagnostic and therapeutic procedure that has remained largely unchanged since its inception in the late 19th century. The current technique is difficult and inaccurate, leading to patient pain, physician frustration and long procedure times.

IntuiTap’s future is looking good. Depending on investment and resources—the team is looking for $1 million from investors—IntuiTap could have a beta prototype by the beginning of 2017 and its device in a hospital pilot program a year later.

“The Biodesign fellowship has positioned us extremely well for success here in Houston and the TMC,” said Jessica Traver, a medical device fellow and CEO of IntuiTap. “We built strong relationships with physicians and were able to consistently interact with them throughout the development process, which has been instrumental in creating a product that solves a real problem.”

One of the physicians working closely with IntuiTap was William E. Cohn, M.D., who was impressed with their productivity. He is director of the Center for Technology and Innovation, associate director of laboratory surgery research in the Center for Cardiac Support and director of the Cullen Cardiovascular Research Laboratory at the Texas Heart Institute. He is also a professor of surgery at Baylor College of Medicine and an adjunct professor of bioengineering at both Rice University and the University of Houston.

“They made good use of their time and progressed in all of their collective skill sets as a result of it,” Cohn said. “I learned as much about the process as the fellows did, as I had not been part of the Biodesign process before, in which the team is assembled before they know what they’re going to be working on. That said, for an inaugural class, I’m super proud of how the IntuiTap team performed. They are the real deal.”

Eric Richardson, Ph.D., associate director of TMC Biodesign as well as lecturer in the Department of Bioengineering and director of the Global Medical Innovation Masters Program at Rice University, said he was pleased with the outcomes this year.

“The products and companies that our fellows have built hold significant potential for commercial success,” he said. “It’s definitely been a year of learning, pivoting and nurturing relationships, both within the medical center and across the country. I think we’ve made a successful first entrance into the national medical technology scene.”

Similar to starting any new venture, Richardson said the ability to learn and adapt will be critical to the program’s success in its first few years.

“We have some significant changes in store for next year, which include more intensive coursework early in the fall, followed by close mentorship and meaningful interaction with industry experts throughout the spring,” he added.

The next class of fellows will begin in August. These eight individuals went through a rigorous selection process that included submitting case studies and participating in a weekend hackathon back in May.

“A good number of our fellows for next year who participated in the TMC Biodesign Hackathon have already started filing for intellectual property on the ideas they developed during the event,” Soleimani said. “This proves that we are starting with a right mix of people who are highly committed.”

To continue to advance the program, Soleimani and Richardson have revamped the curriculum that includes a monthlong boot camp to take the fellows through the entire Biodesign process before they start clinical observations to identify unmet needs. Soleimani believes this will help identify any areas that need further development and reinforcement as well as build teamwork and dynamics.

They also plan to partner with other TMC member institutions, through which fellows can rotate, and to produce educational content for the community that will be available on the Biodesign website.

“We would also like to be able to hold workshops for clinicians and administrators throughout Texas Medical Center who may not have the luxury of taking a yearlong fellowship, but would love to learn the highlights of the process, nevertheless,” Soleimani added.