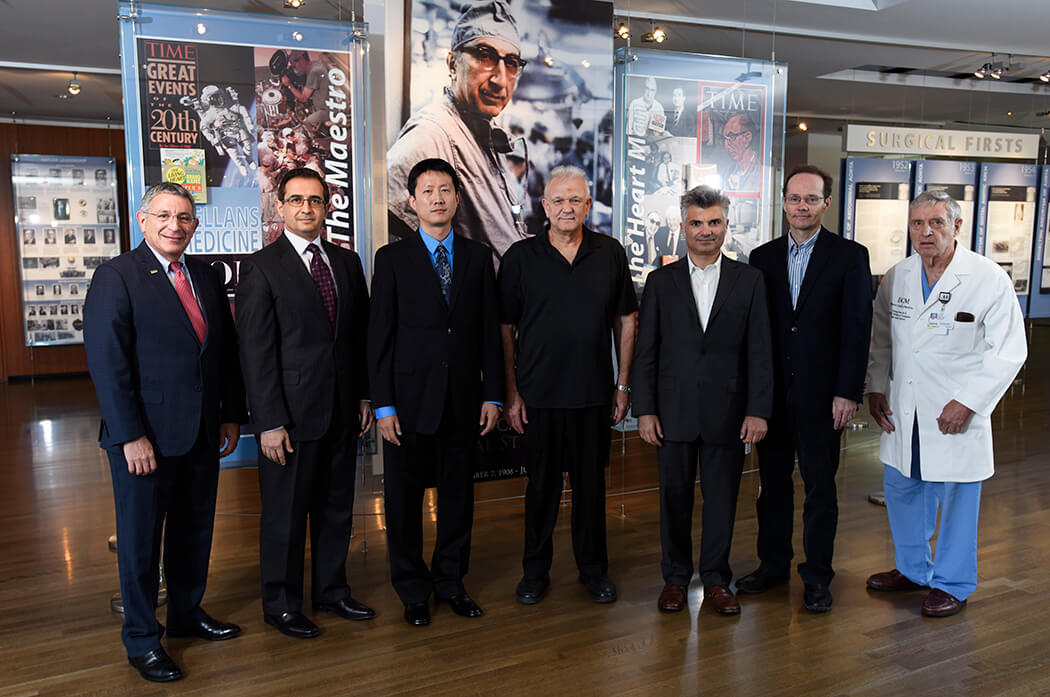 Five Baylor College of Medicine faculty members whose work represents the college’s most significant published scientific contributions to clinical or basic research during the past three years have received the Michael E. DeBakey Excellence in Research Award.

The award, named in honor of the college’s first president and pioneering heart surgeon Dr. Michael DeBakey, was presented to the recipients at a ceremony and symposium May 3. Sponsored by the DeBakey Medical Foundation, it includes a commemorative medallion and funds to support further research.

“Research is the foundation of what we do here at Baylor College of Medicine, and these awardees represent the depth and breadth of our organization,” said Dr. Paul Klotman, Baylor president, CEO and executive dean. “They are very much in the likeness of Dr. DeBakey, who was a man who pushed for excellence in every way and was very heavily invested in the research mission. We’re grateful that these awards are named after him and also grateful to the DeBakey Medical Foundation for the continued support of these awards.”

Bellen, who also is a Howard Hughes Medical Institute investigator, uses Drosophila as a model system to explore the functions of the human nervous system. At the same time, he has made seminal observations in neurodevelopment mechanisms, including synaptic transmission and Notch signaling. Importantly, he has performed genetic screens in drosophila that have fueled translational research in combination with human genetic gene discovery. Most recently he has made transformative observations linking metabolic alterations in mitochondrial function to a host of neurodegenerative diseases.

El-Serag’s research focuses on the epidemiology and clinical outcomes of hepatocellular carcinoma (HCC) and esophageal adenocarcinoma. He has developed an algorithm that offers a much improved predictive value for the risk of liver cancer in patients with Hepatitis C, which could have immediate clinical impact when validated. His landmark study examined the effect of viral genotype on the risk of developing HCC, making viral genotype 3 a treatment priority for patients with Hepatitis C. El-Serag’s work also has opened a new avenue for research into the pathogenesis and markers of Barrett’s esophagus related esophageal adenocarcinoma.

Li’s research is concentrated on the design and application of bioinformatics algorithms to elucidate global epigenetic mechanisms in development of diseases such as cancer. Epigenetics is the study of modifications in gene activity that are not dependent on the underlying DNA sequence, including histone medications, alternative polyadenylation and DNA methylation. Li has developed a series of widely used bioinformatics algorithms for epigenetic sequencing data analysis. In close collaboration with experimental biologists, he has used big data bioinformatics analysis to gain novel biological insights in stem cells, aging and cancers.

Martin and his research team focus on the heart muscle and its failure to regenerate itself after it is damaged as other muscles do. Their work has led to an understanding of the role of the Hippo pathway in the process of cardiac regeneration. A recent paper in Nature reported a novel genetic pathway that interacts with the Hippo pathway and provided new insight for potential therapeutic targets to treat heart failure. This work has opened a new field of research that focuses on investigating the possibility that endogenous cardiomyocytes can be induced to repair the heart after injury.

Tolias focuses his research efforts on the organization of neural network interactions in the visual system, and their functional consequences for perception. Using animal models, his lab employs visually guided behaviors with the goal of understanding the computations underlying perception at the level of the individual neuron. The ability to continuously record individual neurons in an awake, behaving animal is an important technology, and the implications of this area of study are significant for the field of neuroscience and for an array of human diseases, including autism and schizophrenia. Tolias also leads the ambitious multi-institution project Machine Intelligence from Cortical Networks, which aims to reveal the computational building blocks of our brain and use them to create smarter learning machines. It is part of the broader BRAIN Initiative, launched in 2013 by President Obama with the goal of understanding devastating brain diseases and developing new technology, treatments and cures.