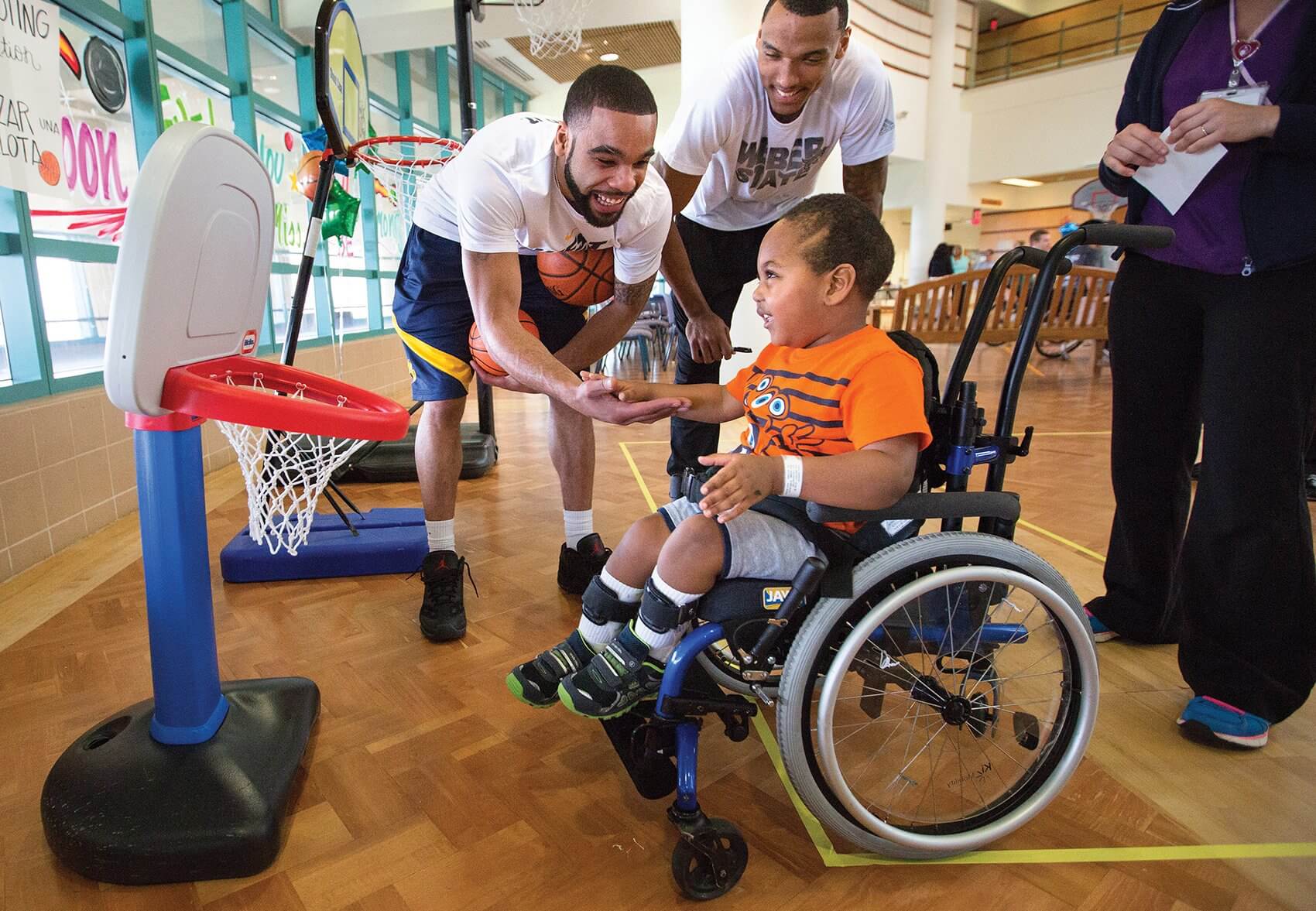 The NCAA All-Star players had more than basketball on their agendas when they came to Houston in March. Student-athletes from the East and West teams made a special visit to patients at Shriners Hospitals for Children – Houston before the 2016 Reese’s All-Star Game.

The All-Star teams are made up of 20 outstanding NCAA Division One student-athletes from around the country. This year, the All-Star game was played at NRG Stadium on Final Four Friday, preceding the Final Four match- ups between Villanova and Oklahoma and North Carolina and Syracuse.

“We try to get our athletes out as much as possible to showcase not only how great they are athletically, but also to show what great people they are,” said NCAA All-Star coach Andy Stark of Stevenson University in Baltimore, Maryland. “This is a great opportunity for us to give back to the community and we are excited to spend time with the Shriners patients.”

The Houston Shriners Hospital provides care to patients suffering from pediatric orthopedic and neuromusculoskeletal disorders and diseases, as well as cleft lip and palate and patients who need sub-acute care or inpatient rehabilitation. In addition to providing patients with exceptional medical services, the hospital also strives to make each patient’s stay at the hospital as happy as it can be. Because of this, Shriners makes everything from the interior of the hospital to the conversations patients have with doctors as inviting as possible.

Shriners was started as a charity hospital in Shreveport, Louisiana, and has grown into a system of 22 hospitals in three countries; 20 in the United States, one in Mexico and one in Canada. Today, Shriners Houston helps children from the surrounding areas in need of care. The hospital has 40 beds and works closely with other hospitals in the Texas Medical Center to provide the best treatment possible for patients.

“Over our 22 hospitals, Shriners has helped over one million children,” said Phillip Gragg, Board of Governors, Shriners Houston. “We think it is great that these young men have taken time out of their schedules to come to our hospital and spend time getting to know our patients.”

Shriners patients, families and staff welcomed the teams with excitement and cheers before they began playing basketball together. During the All-Star visit, the student-athletes played wheelchair basketball with patients and practiced shooting and dribbling drills.

“We set up three areas on our central activity floor for the kids to maximize their experience with the All-Stars,” said Christina Hayden, a child life specialist at Shriners. “The main goal today is to let the kids be as independent as possible and have a great time.”

Emilio, from St. Louis, Missouri, has been a Shriners patient since he was three years old during which time he has been treated at six Shriners Hospitals. After being born with spinal cancer, doctors gave Emilio only one year to live. It was by chance that he was brought to Shriners.

“I had been fighting with doctors for two years about Emilio’s condition and nothing was working or making sense,” said Cindy Lane, Emilio’s mother. “We were golfing one day and a man came up to me and told me to get my son’s legs fixed at Shriners. At first I was skeptical, but the next day they ran every test you could think of and they were able to diagnose him with spastic legs and spinal cancer and they came up with an incredible treatment program for him.”

After 11 years of treatment and being in remission from spinal cancer, Emilio is now 14 years old and is able move independently because of several surgeries on his legs, as well as braces and crutches. Because of this, he had the chance to play basketball with the All-Stars.

“I have been playing basketball since I was little, so it was really cool getting to meet all of the players and shoot with them,” Emilio said. “It’s awesome because they came down here to support us.”

While most of the All-Stars had never played basketball in wheelchairs, they took to it very quickly and made the games exciting for Shriners patients. Because of the diversity of activities, patients of all ages were able to take their turn playing basketball.

“The athletes are way bigger in person than they are on television,” said Devin, a patient at Shriners. “It is so cool that they are really out here playing basketball with us in person.”

After the teams were done dunking, dribbling, shooting and playing around, the All-Stars had lunch with the patients and their families and signed autographs for everyone.

“It’s great being out here with the patient. They are a great reminder that regardless of your condition or what you are going through, you can always have a smile on your face and have fun,” said Wichita State senior basketball player Ron Baker.