More Than a Ride

More Than a Ride 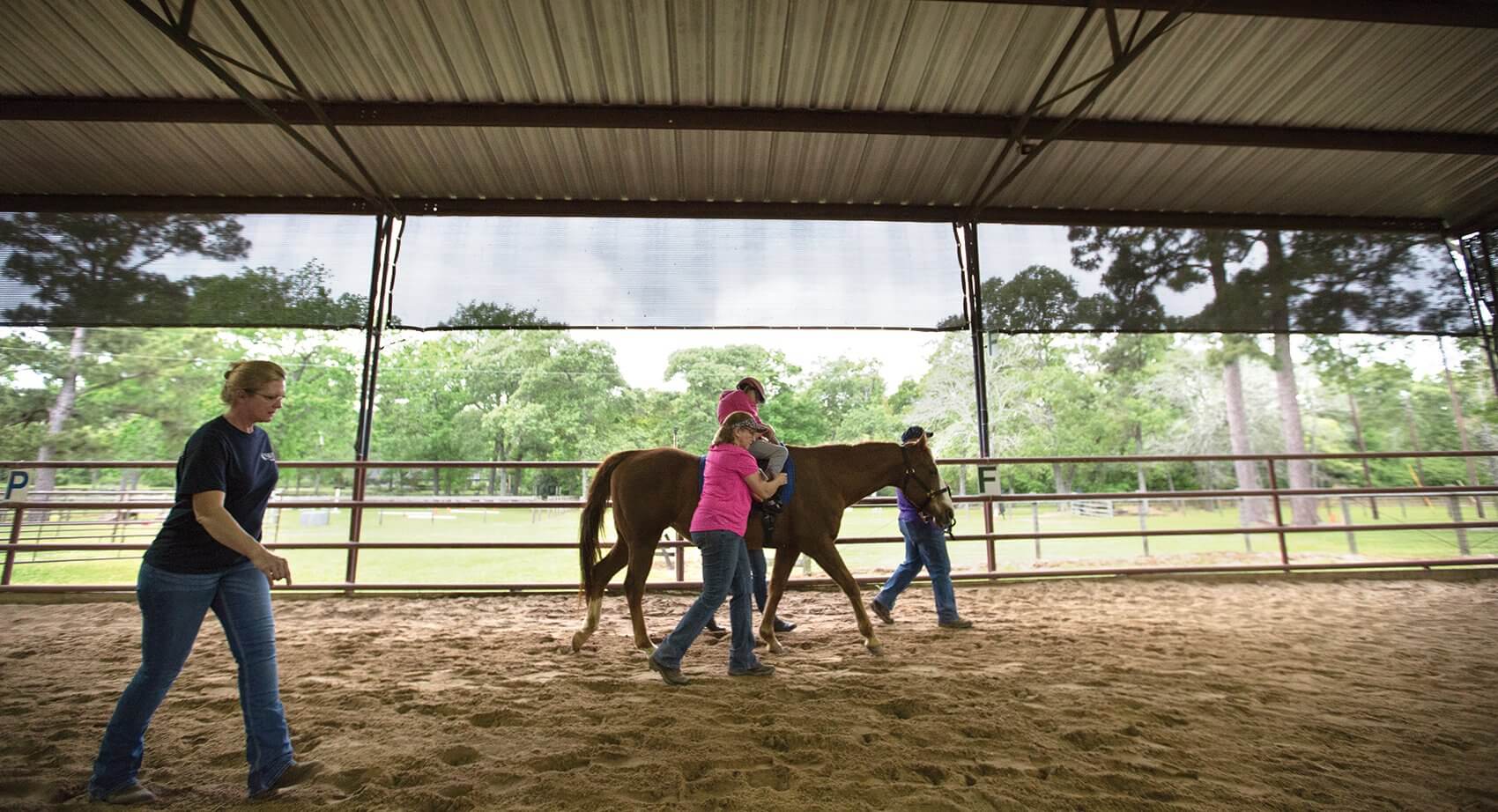 Emelly has been riding horses since she was three years old, but she is not the typical rider. Emelly, who is now 16 years old, was born with a chromosome disorder and depends on a wheelchair for mobility. Once a week, she visits Self-Improvement Thru Riding Education (SIRE) Therapeutic Horsemanship’s location in Hockley, northwest of Houston, to ride Broadway, one of the horses residing at SIRE.

Just before her lesson, Emelly and her mother, Maria Martinez, arrived via ambulance. Decked out all in pink, Emelly prepared to ride Broadway by having her mother stretch out her arms and legs. She explained that they came from their home near Hobby Airport.

“It was a one-hour drive, but it is worth it,” Martinez said.

Susan Hart, Emelly’s occupational therapist, emerged from the supply room with a helmet to match her outfit.

“Are you ready to ride Broadway, Emelly?” she asked.

As Hart and Emelly’s mother wheeled Emelly up the wheelchair ramp, Broadway, a brown horse, patiently waited while she was moved into place.

Since it was established in Houston in 1983, SIRE has helped many people with disabilities ride. The riders range from three-year-olds all the way to a man in his mid-80s who had Alzheimer’s disease, said Anthony Busacca, chief operating officer of SIRE.

The organization has been at its current horse farm in Hockley since the mid-1990s, which was SIRE’s first permanent home. It then acquired its Spring site in 2001 and Fort Bend site in 2006, Busacca said.

In addition to its riders, SIRE also works with Texas Children’s Hospital in an ongoing relationship that involves patients going out to SIRE, as well as working with the hospital on the Pin Oak Charity Horse Show that took place March 29 through April 3 of this year.

Although there are already Texas Children’s patients going out to SIRE, one of Pin Oak’s goals is to create a designated fund to enable more children to go to SIRE that need the therapy, said Mary Jones, charity liaison and a member of the executive committee for Pin Oak, who also serves on Texas Children’s Leadership Cabinet for its Promise Campaign. The fundraising effort aims to help the hospital address current challenges and anticipate the present and future needs of patients.

SIRE is also wrapping up work with The University of Texas Medical Branch at Galveston. Over the past several years, UTMB, led by Tara Patterson, Ph.D., an assistant professor specializing in rehabilitation science and kinesiology, has been bringing occupational therapy students to SIRE as part of a $5,900 MS Entrepreneurial Grant, received from the National Multiple Sclerosis Society, to study the benefits of riding for those with MS.

Patterson, a horseback rider, had a passion for occupational therapy and saw many studies out there about riding, but not many specifically for multiple sclerosis.

“People with MS are unique because there are a multitude of impairments they can get,” she said. “In addition, most of the studies only looked at lower extremities for gait and balance, but I wanted to measure both upper and lower extremities.”

So far, Patterson has been able to look at data from two riders and plans to submit a paper on her results.

“We found there was generalized improvement in the upper extremities with motor function, and in the lower extremities with gait,” she added. “All of the participants thoroughly enjoyed it. Not only were they able to get comfortable around the horses, but they were able to enjoy an overall feeling of quality of life.”

A Professional Association of Therapeutic Horsemanship International master instructor, Busacca has been with SIRE for six years, but has been in the profession for over 25 years, even training instructors all over the world.

While working with clients, he has seen riding help delay the onset of people’s symptoms, particularly in those with Alzheimer’s and multiple sclerosis. For children with cerebral palsy, the idea is to do as many interventions as possible, Busacca said.

“The activity of riding helps with fine motor skills,” he added. “Riding is a total body system exercise. Every time the horse takes a step, it is felt in the total body—physical, mental and emotional.”

For example, as the horse walks, it rocks the body back and forth, so the muscles get a constant, natural workout that can’t be duplicated by any machinery, Busacca said. People who depend on wheelchairs for mobility aren’t using a lot of their muscles, while riding enables them to work those muscles.

“Even on a short, 30-minute ride, the rider is going to feel 2,000 to 3,000 steps,” he added. “Plus, when you think about someone in a wheelchair, they are constantly looking up at people; this is the only time when they can look down at people. That gives them an emotional and psychological advantage. It’s abstract, but when you spend your life looking up at people, being able to look down from a horse is powerful.”

Busacca cited studies and research showing riding helps people produce chemicals in their bodies, including oxytocin and adrenaline, both hormones that are good for the body, he said.

A majority of the riding students have some degree of autism spectrum disorder. In addition to students with cerebral palsy and other neuromuscular conditions, SIRE works with veterans with post-traumatic stress disorder and brain injuries.

Not all students, however, are able to ride. For example, if they display spinal column issues that could keep them from riding, or even other issues with physical, cognitive, social or emotional behaviors, Busacca and his team will evaluate if riding is a good fit.

Even some of the horses don’t make the cut. SIRE, for the most part, partners with horses that are donated, but also purchases some.

“We literally have to look at 10 or 20 horses to find one or two,” Busacca said.

That’s because the horses need to be calm, quiet and sound: some horse owners may decide to donate their horse when it becomes a little lame, but any irregularities don’t provide the therapeutic benefit the rider needs, he added. Instead, the horse needs to be sound on all three of its gaits—walking, trotting and cantering.

Horses are matched up to riders based primarily on physicality. Depending on the breed, horses have narrow, medium and wide bodies. Riders with cerebral palsy or a traumatic brain injury that causes tightness in the muscles fit better on a narrow-bodied horse. Riders with Down syndrome or other neurological disorders that cause weaker muscle tone are good on wider horses for stability.

When the horse walks with a long, relaxed stride, it helps a rider with spasticity—good for lowering muscle tone and tightness. For another rider, a quick, choppy stride helps to improve muscle tone where it is weak.

The idea is for the horse to challenge the rider, so students will progress from horse to horse and in the type of activities they do, Busacca said. Some riders may start out going in big, wide circles on one horse and end up later walking in smaller, tighter circles on another.

Riders do get attached to their horses, so the SIRE team uses the transition as a way to teach positive change.

“Things change, friends go away and family dynamics change, so switching horses is a good way to help them learn to accept that,” Busacca said.

Meanwhile, as Emelly and Broadway headed into the paddock for their weekly ride, Maria Martinez commented that her daughter enjoys riding, and she is seeing the benefits: Emelly sits up straighter, and she keeps her head up the longest while she is riding.

“She also displays more emotion and is more vocal when she is riding,” Martinez said. “A lot of the time, she thinks she is having fun, but really she is working.” 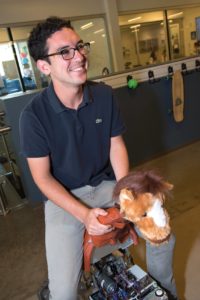 A Horse Closer to Home

For patients who can’t get out to a horse farm like SIRE Therapeutic Horsemanship, some Rice University engineering students are working on a solution that will bring hippotherapy, or equine-assisted therapy, a little closer to home.

A team of students who call themselves the “Hippo Riders” developed a robotic horse simulator, complete with a toy horse head that neighs, to enable patients to have a similar riding experience, but indoors. The project is part of their senior capstone design project at Rice’s Oshman Engineering Design Kitchen, that they demonstrated at the university’s annual Engineering Design Showcase on April 14.

They noted, however, that the American Hippotherapy Association Inc., an organization that helps educate people about the therapy and finding a therapist, says there are nearly 700 clinics that perform hippotherapy, and each of those see between 10 and 20 patients per day.

The robotic horse was crafted using $1,200 in parts. Brett Berger, a mechanical engineering student on the team, said they have been able to source materials for additional horses at around $1,500 and are working on developing a manufacturing plant so they can help get costs down.

Ultimately, the goal is for patients, who are mainly children, to be able to either have one of the horses in their house, or at a nearby physical therapy clinic, the team said.

“All of us were drawn to the project because this particular device could help people much more than some of the other projects we saw,” Berger said.

“We focused on the benefits, but we also know that physical therapy can be boring at times, so if it looks and feels like a horse, that adds a different element to it,” Amy Ryu, another mechanical engineering student on the team, added.