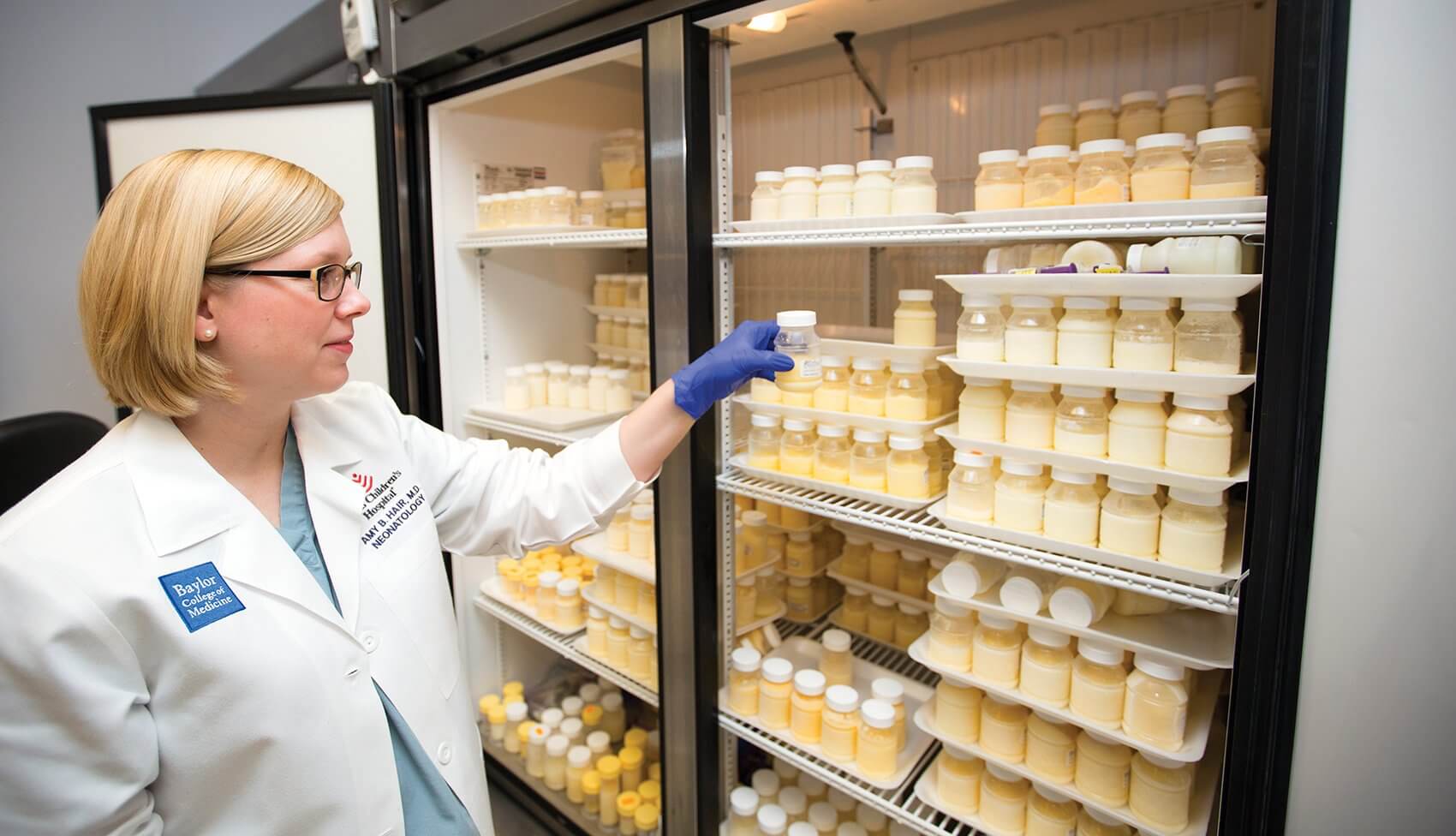 The quest to replicate biological matter is one of modern medicine’s most promising endeavors, but also one of its greatest challenges. Be it synthetic blood, xenotransplantation efforts or extracellular matrix technology, the field has the potential to transform health care and save countless lives. The problem is, nature is just smarter than we are—at least for now.

Nowhere is this truer than in the case of infant formula. No matter how comprehensive the list of essential vitamins, minerals, proteins, fats and carbohydrates, even the best brands on the market can’t touch the composition of breast milk. That’s because breast milk is tailor-made to produce the nutrients a baby needs to grow and develop, including living antibodies for fighting infection as well as healthy bacteria which supports early development of the microbiome. Again and again, studies have indicated that because of these factors, breast milk is beneficial for neurological development and general growth and is associated with a decreased risk of ear and respiratory infections, GI issues, asthma, eczema, SIDS, juvenile-onset diabetes, childhood obesity, allergies—the list goes on.

Its unique biological properties are especially important for premature infants whose digestive systems are underdeveloped and often have trouble tolerating formula. One of the most common and fatal conditions observed in low birth weight preemies—those weighing 1500 grams (3.3 lbs.) or less—is an illness called necrotizing enterocolitis (NEC), in which the immature intestinal lining decays as a result of infection and inflammation. Research has shown that babies who receive breast milk are at a much lower risk of developing NEC, suggesting that the cow’s milk proteins found in formula may contribute to the infection itself.

“After implementing an all-human milk diet in our NICU, we watched our intestinal infection rate of necrotizing enterocolitis fall from 14 percent to somewhere between two and three percent,” said Amy Hair, M.D., neonatologist and director of the neonatal nutrition program at Texas Children’s Hospital.

Their all-human milk protocol was initiated in 2009 in response to the overwhelming evidence emerging at the time that exclusive breast-feeding, put simply, saved lives.

Hair explained that the composition of a mother’s milk changes over time to meet the growing needs of her baby. The first type of milk a mother produces, called colostrum, is high in fat and protein and contains concentrated immune factors, and, like all breast milk, is easily absorbed in the intestine—it’s exactly what a doctor would prescribe for newborns, especially preemies who sometimes have weeks, if not months, of gestational development left to complete.

“We were noticing over the years, since we began this in 2009, that our babies were just doing better,” Hair said. “Our overall outcomes were better. So we looked at data from before we implemented this protocol to after, and what we found was that babies
who received all human milk have less complications of prematurity. They had less severe retinopathy of prematurity, which leads to blindness, less chronic lung disease, less infections and less mortality.”

The properties are so potent that even a few drops contribute to an overall improvement in health. Hair cited a few recent studies that showed even tiny premature babies who cannot be orally fed or fed with a feeding tube benefited from caregivers taking just a small amount of the mother’s colostrum and swabbing their mouths with it.

“It was shown to decrease infection and start building their immune system and microbiome,” she said.

The benefits of colostrum and the later stages of breast milk extend to all babies, not just those born prematurely. In fact, the Centers for Disease Control and Prevention, the World Health Organization and the American Academy of Pediatrics all strongly encourage mothers to breast-feed for six months to up to two years or longer if they can. The recommendations echo unanimous support across the medical profession that, as the saying goes, “breast is best”—which begs the question: Why don’t all mothers breast-feed their babies?

The answers run the gamut from personal choices or cultural norms to medical contraindications or inability to produce. For example, if a mother is infected with untreated tuberculosis or HIV, or if she is taking antiretroviral medications or undergoing chemotherapy treatment that interferes with DNA replication or cell division, breast-feeding is not advised. The same goes for mothers who are dependent on an illicit drug or are engaged in any other lifestyle choices that may contaminate her milk enough to render it more harmful than beneficial. Some mothers cannot make milk, no matter how hard they try to increase their production, and for those who do, it generally takes a few days for their supply to “come in” after giving birth, especially for first-time moms or mothers who had premature babies.

“Just having a preemie alone, your body isn’t ready to start making milk,” Hair said. “That was a challenge for us, because medical literature was starting to show that the earlier you feed these tiny babies human milk, the better. The time-frame mattered in the outcomes.”

So Texas Children’s Hospital, in a push to adopt the all-human milk diet for their babies in the NICU, initiated a donor milk program to supplement those mothers who could not immediately provide their own milk. Although mother’s milk is the first and best choice due to it being custom-made in real time and filled to the brim with antibodies, donated human milk is second best (and, even after extensive pasteurization, retains some of the immune-boosting kick). The program worked successfully for two years, but in 2011, a nationwide shortage in donor milk led to the creation of a milk bank at the hospital itself.

“We wanted to protect our babies and make sure we could provide this milk for them,” Hair said. “We realized that Houston was the fourth largest city in the nation and there was nowhere for mothers with excess milk to donate. We’re proud to have the only milk bank in Houston and to say that the milk our moms donate comes back to us for our babies. It’s Texas milk for Texas babies.”

Here’s how it works: mothers with excess milk supply, usually built up from pumping their milk and storing it in the freezer, contact Texas Children’s to fill out the required paperwork. Once vetted, a phlebotomist will visit them at home or at work to draw blood (the screening process is actually far more rigorous than that for blood donation). If approved, a special cooler will be sent to the mother’s home for her to fill up with bags of her excess milk. The cooler is then picked up and shipped to a large, pharmaceutical grade facility in California where it is tested and then combined with the other samples. Together, the donated milk is pasteurized, packaged, and sent back to Texas Children’s where it is stored in the milk bank until it is needed.

“When you think about it, the program is all about babies giving back to other babies,” said Savanna Bowman, a local mother who started the donation process when she built up an excess supply with her first daughter. “That’s so cool.”

Since Texas Children’s launched the donor milk bank program in 2011, the hospital has collected over 227,000 ounces from mothers in the community. In 2014 alone, the donations totaled 444 gallons of breast milk, which resulted in more than 56,800 feedings that year.

“Anyone can do it,” Bowman said. “If you pump, all it takes is just a few extra minutes and it really adds up quickly. Even just donating a small amount can make a big difference for these babies.”

Morgan Bryan, whose twins received donor breast milk in 2014 when they were in the NICU at Texas Children’s, explained how that is especially true for low birth weight preemies.

“A little bit of milk goes a long way for these itty bitty babies,” she said. “An ounce of milk takes a preemie almost an entire day to finish, so every little bit helps.” In contrast, a full-term newborn drinks approximately 1.5 to 3 ounces every two to three hours.

Bryan remembered how helpless she felt when her twins were in the NICU and she was not yet able to produce her own milk.

“Knowing that at least they were getting human milk instead of some- thing formulated gave us such peace of mind,” she recalled. “You feel so helpless, and there’s not a lot that is natural to the process of having a baby in the NICU, so just knowing that they were getting the best nutrition available relieved some of the pressure and guilt.”

Sadly, one of Bryan’s twins did not survive. Determined to provide her son with breast milk for as long as possible, she continued her same pumping rou- tine and, within a few months, built a supply in excess of 3,400 ounces.

“Of course, we knew exactly what we were going to do with it,” she said.