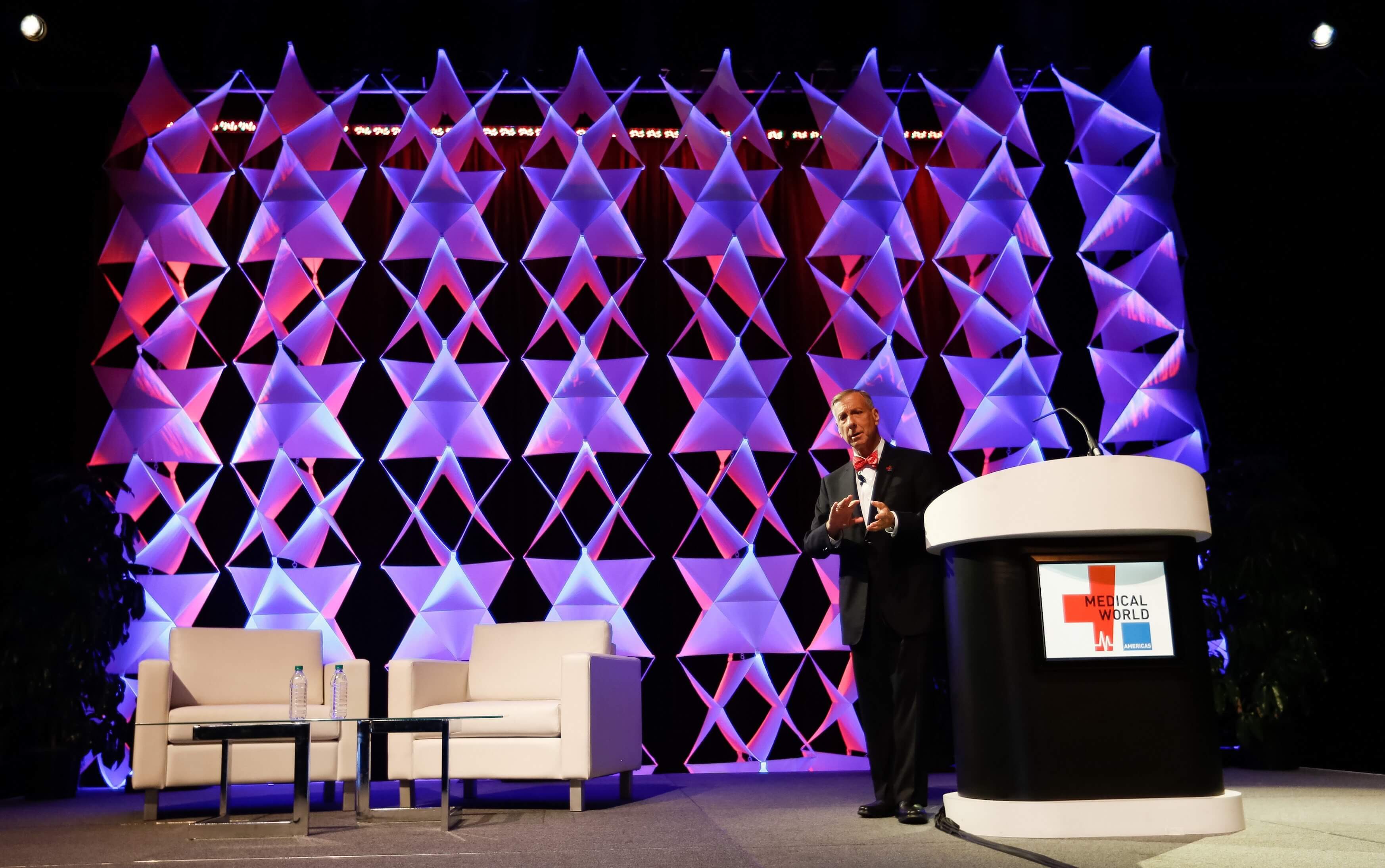 Arthur “Tim” Garson, M.D., doesn’t believe in just presenting survey results—he wants the audience to be part of the results.

The director of the TMC Health Policy Institute kicked off the first plenary session, entitled “Innovation in Medicine and Health Care,” of the third annual Medical World Americas Conference and Expo taking place May 18 to 20, at the George R. Brown Convention Center.

After being introduced by Robert C. Robbins, M.D., president and CEO of the Texas Medical Center, Garson explained some of the results of the “Second Annual Texas Medical Center Consumer Health Report,” but not before telling the audience of about 100 that the small remote controls they received when they walked in could be used to answer questions he would be asking.

“The fun is you have your little clickers, because we would like you to have fun here. Last year we did it with hands, this year we are doing it with clickers,” Garson said.

Unique to this year’s survey is the expansion of the respondents to 5,000 from 1,000, and the addition of respondents from California, Florida, New York and Ohio, as well as Texas. Nielsen conducted the survey through Harris Poll, asking adults, aged 18 and older, to assess their attitudes and behaviors toward topics including health insurance quality, affordability and how those relate to their choice of political candidates.

Following a practice question, the audience was asked what was the most important statement describing a health care system: basic health insurance for all; treatment causes patients to get better; patients can choose their own physicians; patients can get appointments to see their physicians when they need one; patients, not doctors, make the medical decisions; and patients can pay health care bills without cutting down on their expenses.

“Health insurance coverage for all” and “treatment causes patients to get better” were the highest-scoring among the audience members. In the actual survey, the results were similar, with the majority wanting coverage for all, while the next most popular choice was patients want to choose their own physicians.

“One of the take-homes for me is that choice is still important,” Garson said. “The one that blows me away is that 11 percent said that it was ‘important that I get better.’ I ask people, ‘Doesn’t it matter if you get better?’ and they say, ‘Well, we just assume that.’ Well, the five states do not assume.”

Other interesting findings included having health insurance coverage was more important to those surveyed than cost, being able to see a physician or quality of health care. In addition, 52 percent of respondents were in favor of a tax on sugary drinks.

Overall, Garson said the survey was meant to show where the problems in health care lie so that they can be fixed.

Medical World Americas in a nutshell

The theme of the conference this year is “Innovate: Transforming Health through Disruption and Discovery.” It is put on through a partnership with Houston First and is the American counterpart to Medica, an annual conference in Germany.

“This is a real partnership between the Texas Medical Center, TMC, and Houston First to provide an opportunity for the institutions in the Texas Medical Center to come together in a collaborative way, which is the theme of what we are trying to do across the medical center,” Robbins said during his introduction of the session. “We look forward to growing this event larger over the years.”

During its first two years in Houston, MWA contributed $1.5 million of economic impact, accounted for 1,200 hotel rooms booked and had 2,300 attendees, Houston First told the Houston Business Journal. This year, the attendance is expected to be about 2,500.

The 2016 keynote speaker is Dean Kamen, inventor of the Segway as well as other technologies related to health care.

For more information on Garson and the Consumer Health Report, check out the June edition of TMC Pulse. Join the Medical World Americas conversation over the next two days by tweeting and following #MWA2016.