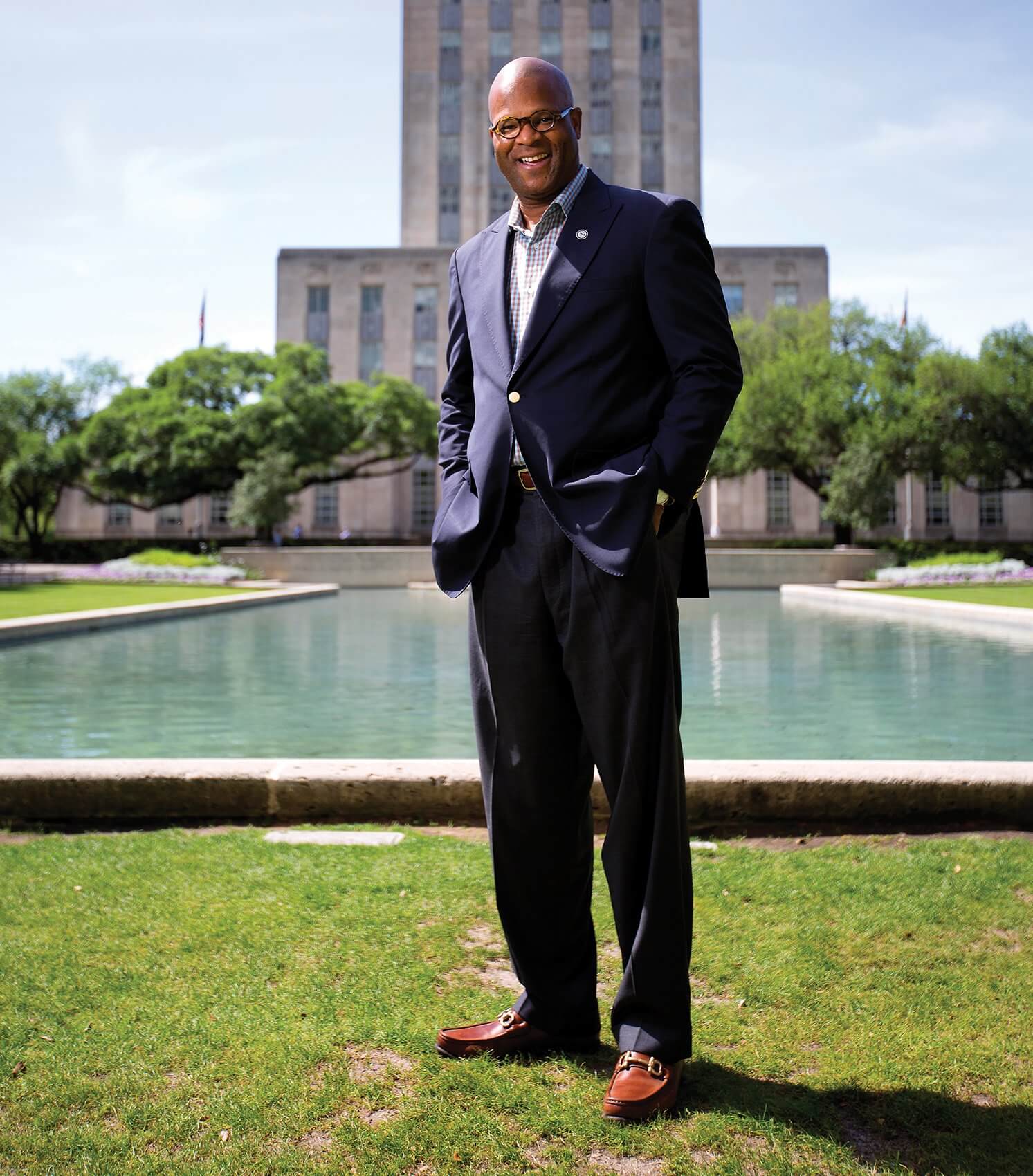 Dwight Boykins, Houston City council member, District D, shares his vision for Houston and why he believes second chances and a focus on communities should drive policy change.

Q | First, tell us about your background.
A | I’m a native Houstonian. Born and raised in District D. I attended public schools in the southeast part of Houston; we call the neighborhood South Union. I was raised by a single parent with six other brothers in the projects. Our mother was always telling us to stay focused, keep our faith and have dreams, and we can be whatever we want to be. I went to Texas Southern University, graduated in business with a degree in marketing, and then went into the banking industry. I worked at Texas Commerce Bank before it was Chase Bank, so that’s where I started my career. Then I got married, and I’ve been married for 26 wonderful years. We don’t have any children. My wife and I believe God put us together because he knew he was going to use us to bless others. Through our church, at Windsor Village United Methodist Church with Pastor Kirbyjon Caldwell’s leadership, we have been involved with a lot of community development projects throughout the City of Houston. As a council member, fast forwarding, I’ve always implemented programs with my past in mind, not forgetting where I come from.

Q | Tell us about your path to City Hall.
A | I had an opportunity to run for city council in ’99. It was a citywide race and I didn’t win. Then I ran again, I think in 2001. I came up close again and vowed I was through with it. Then Mayor Parker asked me to serve on the ReBuild Houston Oversight Committee to help put a program in place to address street and drainage issues throughout the whole city. I realized how important it was, the future development of our city. We’re the fourth largest city in the country, working toward number three, and we’re very diverse in terms of economy. So companies were coming, and they’re bringing people. You have to have somewhere that’s decent for them to live with a good infrastructure for floodwater and the whole nine yards. And I said, ‘You know what? I think I’m going to give this one more run.’ I talked to my wife and she gave me the green light. And it was the right thing, because I wanted to make sure my community received its fair share of infrastructure dollars. It was a crowded field of 11 candidates, and I came up right at 44 percent. I almost won it, and then we won it in the runoff. And since I’ve been here, I think I’ve implemented some things that make a real difference in the community.

Q | Can you tell us more about that?
A | Absolutely. First, we’re addressing needs for senior citizens in my district. Sixty-six percent of my population are seniors, and I would guess that about 58 percent are probably on social security or some kind of pension. And so, for me to know that and to knock on your door and ask for your vote—when your door is falling off—it goes back to my project days. How do you help the least and the last? So understanding their needs, but also that they have limited income, I decided to come up with a program called Seniors Minor Home Repair Program where we help seniors. We raise private money to help seniors with minor home repairs at no cost to them. We’ll fix the doorframe, fix the room—they’re minor problems, but we’re keeping them from becoming major. And it has been very successful. Over 125 homes have been repaired, and that means 125 lives have changed. There was this one lady, who has since passed on, and she was a diabetic and had lost her leg. She was in a wheelchair but you would never know it. With her spirit and personality, she could have run a marathon. She was a very wonderful lady. But you could see that she wasn’t able to take care of her house anymore, and probably pride kept her from doing anything about it. One of her doors was so narrow that she couldn’t get through it in her wheelchair. So we took care of it, we found an angel contractor who gave it to us at no cost. We reframed the door and then put in a new sink for her. That’s what matters to me. I want to make certain I’m known by the results of my efforts as a public servant, not a politician.

Q | Your Second Chance program is a great example of this.
A | I’m glad you brought it up. The Second Chance program was an initiative I came up with when I realized that there was a major gap between unemployment and employers who were looking for individuals to hire. What typically happens is you have a process that allows elimination without a full vetting of the process. What I mean by that is you’re looking for employees, and this employee is looking for a job, but this person made a mistake as a kid, a bad decision. Just bad choices. Seventeen, got pregnant, dropped out of school, never got a formal education, maybe was incarcerated due to drugs, hot checks, whatever. And then they have a pattern of five to 10 years of a clear record, and they’re still paying the price when it comes to getting hired. I believe people deserve second chances. I really believe that. What a lot of people don’t realize is that people usually develop a skill while they’re incarcerated. They walk out of prison with a certificate for operating heavy equipment, for example. They can hit the ground running—you’ve just got to give them a chance. When you give people a second chance, crime goes down. A person’s self-esteem goes up. I truly believe, by the grace of God, that people will make a difference with maturity and a second chance. I don’t believe in being blessed and forgetting about others. Now let me be clear: I’m talking nonviolent, minor offenders. If you’re imprisoned for something major, then that’s a different story.

Q | It sounds like you’re really working to make a di erence for your community. Can you tell us what you would consider to be one of the most significant moments of your career?
A | I would say graduating from the American Leadership Forum, the ALF. It’s a 12-month program, and what it did was allow me to get into a circle of individuals that I otherwise would have never known. The ALF is a leadership training program that brings together nonprofits, CEOs from major corporations and influential political or business folks. It’s a major self-development program and it teaches you what teamwork and respecting differences can do. My wife is a senior general counsel for NRG Energy, so she was tapped and went through it as well. In terms of professional development, I would say creating the Seniors Minor Home Repair Program. It really changes lives.

Q | What about challenges in your career? Can you tell us about some of the things that have been most difficult?
A | The biggest challenge is to be able to work with the different levels of the government to support the needs of the communities. I don’t play politics when it comes to quality of life.

Q | How would you like to see continued collaboration with the Texas Medical Center?
A | That’s a great question. What I would like to see is continued expansion outside the medical center. Non-emergency clinics. Say, for example, with Texas Children’s. They set one up near my church off Post Oak so the residents don’t need to tie up the emergency room for minor injuries. I would like to see more of that. And of course, outreach for employment opportunities.

Q | You’re on the Super Bowl Host Committee. Can you tell us how you’re planning to leverage this opportunity to help the community?
A | Well, it’s a big opportunity for Houston. On the economic side, jobs will be created. But one of the biggest things is that the Super Bowl will not be in the downtown or Galleria area only. It’s going to be out in the communities. So we’ll have events in all 11 different council districts. I’ll ask each council member to provide us with a local park in their district, then we’ll have a Hall-of-Famer or a retired NFL player host an event in one of the 11 districts in the morning. Then at noon they’ll all leave from each park, 400-plus kids, and go to a restaurant in the neighborhood. Your local coffee shop or hamburger shop or pizza shop in the community will all benefit. So the economics are staying in the communities and the kids are getting to be a part of it since not everybody can get downtown.

Q | What is your biggest hope for the future of Houston?
A | The future of Houston is bright—very bright. We are close to becoming the third largest city in the country. It’s amazing every time you talk to someone and you ask them where they’re from, you may be lucky to get one out of five from Houston. People like our economy, they like our weather and the quality of life here in Houston. In working with Mayor Sylvester Turner, one thing I do want to address is the number of homeless people we have in our city. We need to make certain that we encourage them to use the vacant rooms that are available for them, the psychiatric services, and all of that. My understanding is that there is a bed for every homeless person, they just don’t all take advantage of it. But we also have to address the underlying issues—why they’re homeless or why they’re here in the first place. That’s a big problem I’d like to help solve.