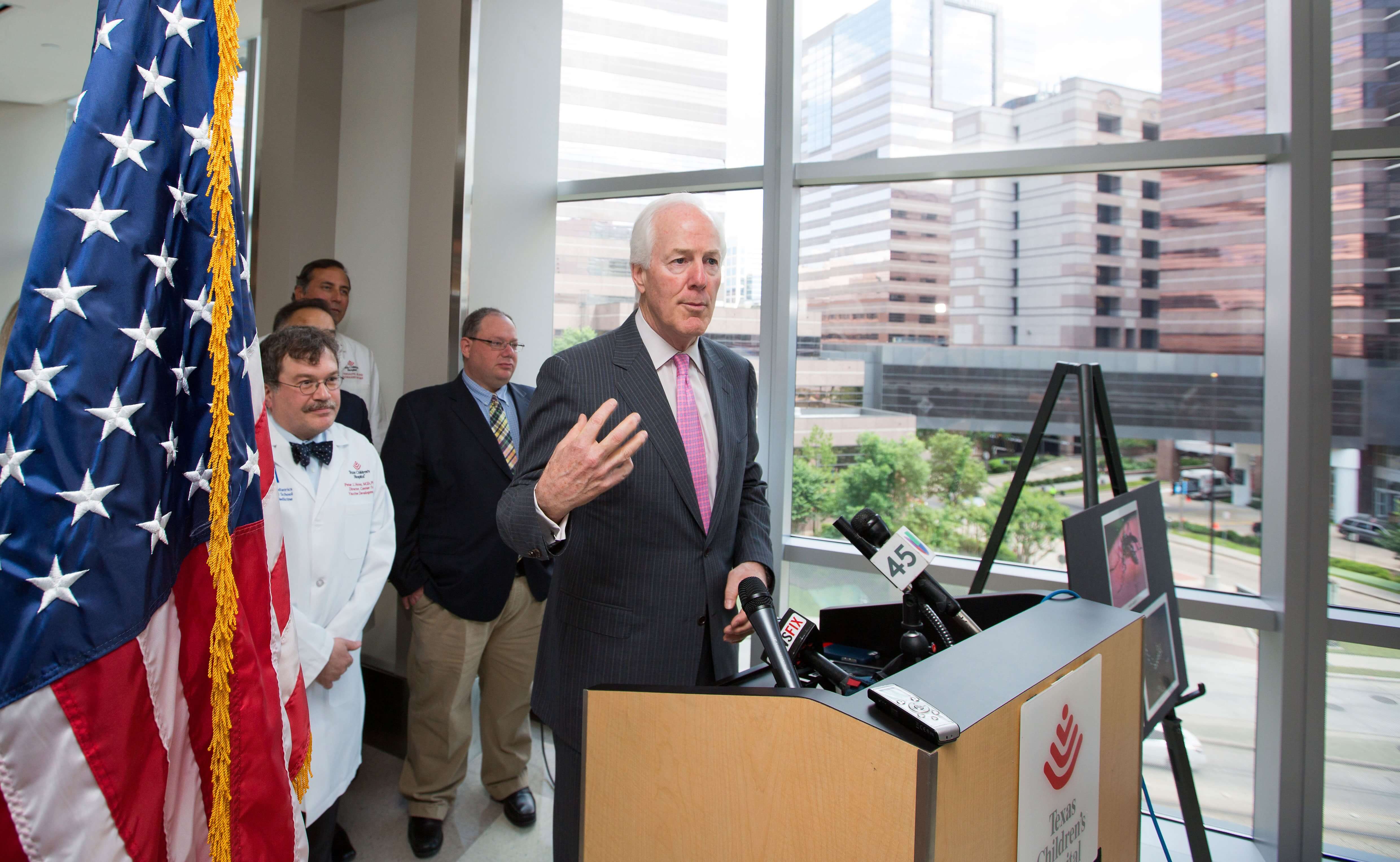 On April 22, Sen. John Cornyn of Texas listened to Texas Medical Center doctors and Houston city officials break down research efforts on the Zika virus and preparations as mosquito season gets underway.

Zika virus is a mosquito-borne virus with symptoms that include mild fever, skin rash, conjunctivitis, and muscle and joint pain, according to the World Health Organization. It is making news, however, because if contracted by a pregnant woman, it causes babies to be born with microcephaly, or abnormally small heads.

Officials briefed Cornyn on the Zika rapid test, mosquito control and other initiatives to prevent the spread of the Zika virus. Currently, just one in five people are showing symptoms of the disease, doctors said, but that is going to change.

The following are excerpts from the panel discussion:

“What we are learning [about Zika] is not good. This is our worst nightmare. Zika affects the stems cells and stops the development of the brain in babies. I can’t imagine a worse congenital birth defect. There are three factors that predict where how this disease will spread: Places where you can be bit by a mosquito, crowding, and poverty…we worry about the Gulf Coast, where we have mosquitos, crowding and poverty. We are going to be in for a difficult summer…unless we take the appropriate steps.” — Peter Hotez, M.D., Ph.D., dean of the National School of Tropical Medicine at Baylor College of Medicine, and Texas Children’s Hospital Endowed Chair of Tropical Pediatrics and director of the Center for Vaccine Development.

“We started a task force in the first week of January, and had a couple of goals in GYN and OB, one was to be able to get a clinic up because our population is so fluid. We have to try to find ways to combat this in public health and individual care, and try to understand this virus we know nothing about. We don’t know how this gets from the mother’s blood to the baby. This is, in many ways, as a physician-scientist, our worse nightmare. We have a virus we don’t know anything about scientifically, and we are scrambling to … see what it does, and it is completely unpredictable.” — Kjersti Aagaard, M.D., associate professor of obstetrics and gynecology in the Section of Maternal Fetal Medicine at Baylor College of Medicine and Texas Children’s Hospital.

“In the span of about two months, we knew we had a major problem that was rapidly coming our way. It is hitting the Americas and also Puerto Rico. We are preparing by detecting a virus in a pregnant woman, child or man who may be symptomatic and worried about transmitting that to his wife or significant others. We developed a molecular test, and we know the Centers for Disease Control is capable of doing the testing, but we are on the front lines, and we need to be able to deliver rapid answers. Over 75 tests have been performed to date.” — James Versalovic, M.D., Ph.D., pathologist-in-chief, Texas Children’s Hospital, Milton J. Finegold Professor and vice chair in the Department of Pathology & Immunology, Baylor College of Medicine.

“We have been interested in more rapid diagnostics using molecular devices, so what we can do now using blood, amniotic fluid or spinal fluid, we can detect small amounts of the virus. If we get a sample early in the morning, we can get results in the evening. But, we have to have this rapid diagnostic be available on a day-in and day-out basis with the full understanding that next year there will be some other potential public health problems.” — James Musser, M.D., Ph.D, Fondren Distinguished Endowed Chair, Department of Pathology and Genomic Medicine, Houston Methodist Hospital; director Center for Molecular and Translational Human Infectious Diseases Research, Houston Methodist Research Institute; professor of pathology and laboratory medicine, Weill Cornell Medical College of Cornell University.

“We are concerned that because we have a mosquito population, the Aedes mosquito is throughout Texas, and a real challenge we have is people are coming back and one of our mosquitoes biting them, and it has enough of the virus in the blood that the mosquito can pick it up and locally transmit to others who have not traveled. We are fortunate to have a mosquito control program, which is unique. Harris County is a size larger than Rhode Island with a population four times the size. We are focusing where the mosquitos are, and some are at night, and we can send the trucks out to spray, but the Aedes mosquito is a daytime mosquito, so we don’t have a silver bullet to send our trucks out to spray. We need to educate our community to change behaviors because of their sources of breeding—tires and even small bottle caps, are places a mosquito can breed.” — Umair A. Shah, M.D., executive director, Harris County Public Health & Environmental Services (HCPHES) and Local Health Authority for Harris County, Texas.

“The Aedes mosquito doesn’t just bite one person, it bites multiple in one day, so it could affect four or five people at one time. This mosquito, we can’t spray during the day with kids, pets or people out. However, we could go and target if we know where they are. That’s where pesticide becomes a tool. There are three solutions: implication, source reduction and personal protective measures. We would like people to travel, but when they come back, they should immediately wear insect protection. It will keep the mosquito from coming to them. We want to delay the virus, but sooner or later the mosquito will pick up the virus.” — Mustapha Debboun, Ph.D., Director of Mosquito Control Division, Harris County Public Health and Environmental Services.

Following the panel, Cornyn toured the maternal-fetal medicine imaging and laboratory at the Texas Children’s Pavilion for Women.

At a press conference, he explained that President Barack Obama has requested Congress, in which Cornyn sits on the Senate Finance Committee, to fund a program to deal with this issue at the level of $1.9 billion. Cornyn’s challenge is to answer the questions of what is the appropriate level of funding and if there is overreaction or under.

“The risk of underreacting is really too high to take any chances,” he said. “I’m confident with the $500 million appropriated, but not used, for Ebola, we can get started on the public health aspect of mosquito eradication to stop this devastating virus as quickly as we can. The main point is we need to make sure we remain diligent, and thanks to the great scientists and medical professionals at the Texas Medical Center and across the country, I am confident we will be on the cutting-edge of new discoveries that will help the public health across the globe.”