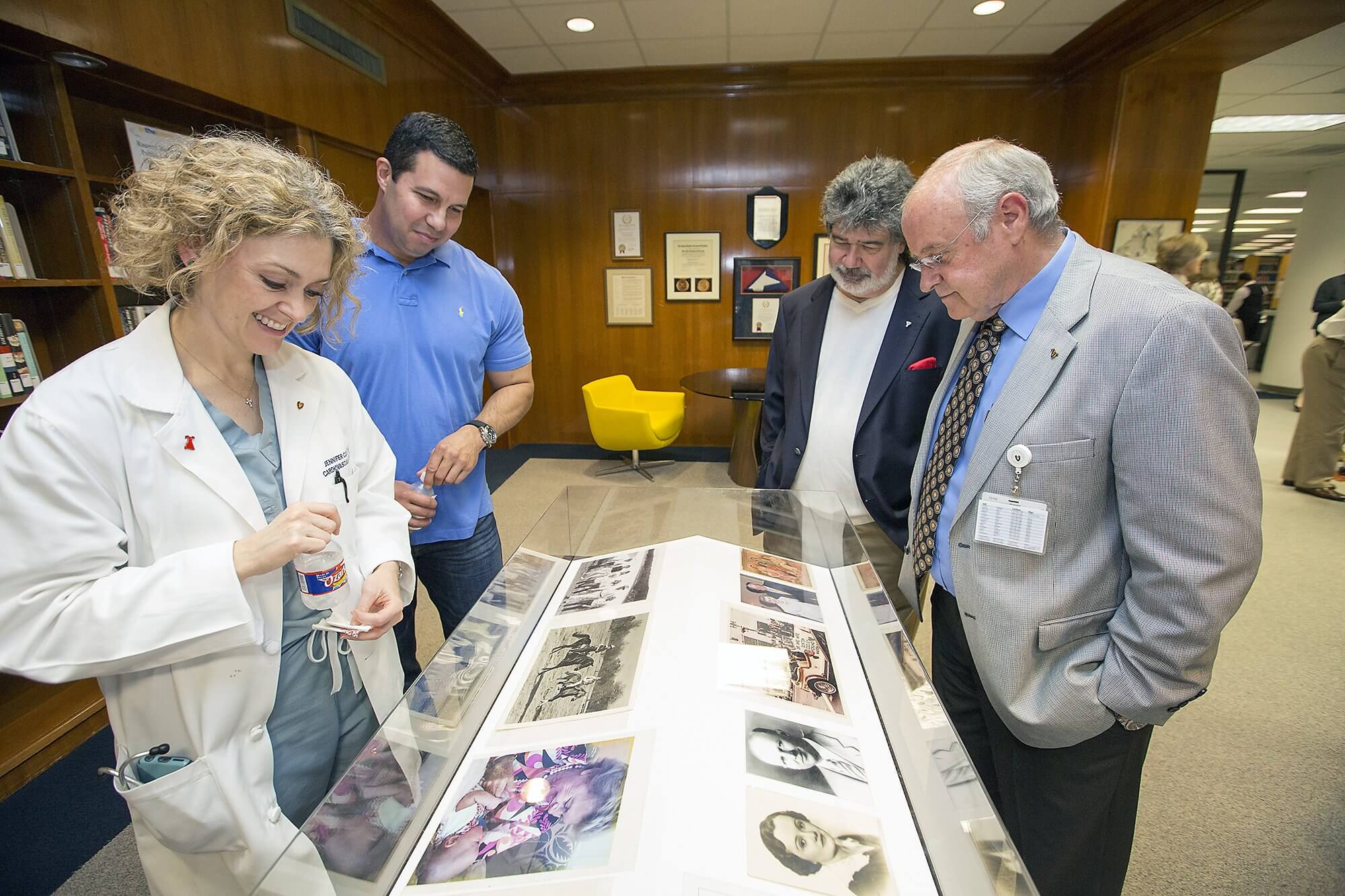 The Texas Medical Center Library held an open house Thursday to celebrate the completion of its first phase of renovations. The building, which was constructed in 1954, has grown with the medical center over the last 61 years and is home to some of the rarest books in the world.

The plans to renovate the library began two years ago with a lead gift from Denton A. Cooley, M.D., to share his legacy with future generations of medical students, doctors, nurses and other heath care professionals. The first phase of renovations at the museum includes the Denton A. Cooley, M.D., Exhibit Room, the newly relocated McGovern Rare Book Collections and the Herbert L. Fred, M.D., 24/7 Study Hall. In addition to the renovations, the library also added a new handicapped lift donated by Joyce and Lex Frieden that can accommodate motorized wheelchairs and up to 750 pounds at one time. Frieden is a professor of biomedical informatics at The University of Texas Health Science Center at Houston (UTHealth) and director of the Independent Living Research Utilization Program (ILRU) at TIRR Memorial Hermann, as well as one of the chief architects of the 1990 Americans with Disabilities Act.

The Denton A. Cooley Exhibit Room showcases original film from Cooley’s pioneering heart surgeries in the 1960s, his papers, awards and honors, as well as surgical paintings. Cooley was in attendance at the open house to watch his films with guests.

“Dr. Cooley is very proud of the work he has done and wanted to share it with others,” said Mary Stevenson, chief development officer of the Texas Medical Center Library. “By creating an exhibit room to showcase his work, his legacy is preserved for generations to come.”

The McGovern Rare Book Collections had originally been on the second floor of the library and was often forgotten because of its remote location. As part of the renovation, the collection of historic medical books valued at $3.4 million is now a prominent part of the library. This was made possible by Kathrine McGovern, wife of the late John P. McGovern. The collection features books by William Osler, M.D., also known as the “Father of Modern Medicine,” in addition to medical books dating back to the 1400s.

“Dr. McGovern was an avid collector of medical history, and he gave us most of the books that are in the McGovern Rare Book Collections,” Stevenson said. “Because of its previous location, most visitors never even knew it was there. In its new location, visitors can see William Osler’s fireplace, the beautiful sculptures and all of the books.”

An appointment is required to see the Rare Book Collections. Visitors must wear gloves when looking through the books because of their age and rarity.

The Herbert L. Fred, M.D., 24/7 Study Hall was donated by Fred to provide students with a space for studying. The study hall is a 24/7 area that includes a vending machine and coffee machine, a smart board and tables wired with USB ports and electric outlets. The library staff used feedback from focus groups and surveys to determine specific things students wanted to have in a study room.

“We have students come to us from Baylor and UTHealth to study in our library and for them to be successful, they need a place to study,” Stevenson said. “It is our responsibility to provide that for them and make sure they have the resources and books they need available to them at all times. We had kids going in the study hall the night we opened it, they couldn’t wait to start using it.”

The second phase of library renovations are set to begin in May and will include more study rooms for students, brighter interiors, more handicap access, new furnishings and an overall better use of space.

“The renovations will create a much more positive user experience for our patrons,” Stevenson said. “We have taken the feedback from our focus groups and surveys very seriously, and we hope to make the library a place people want to come and can be successful in.”

COVID-19 has transformed the business of organ transplants