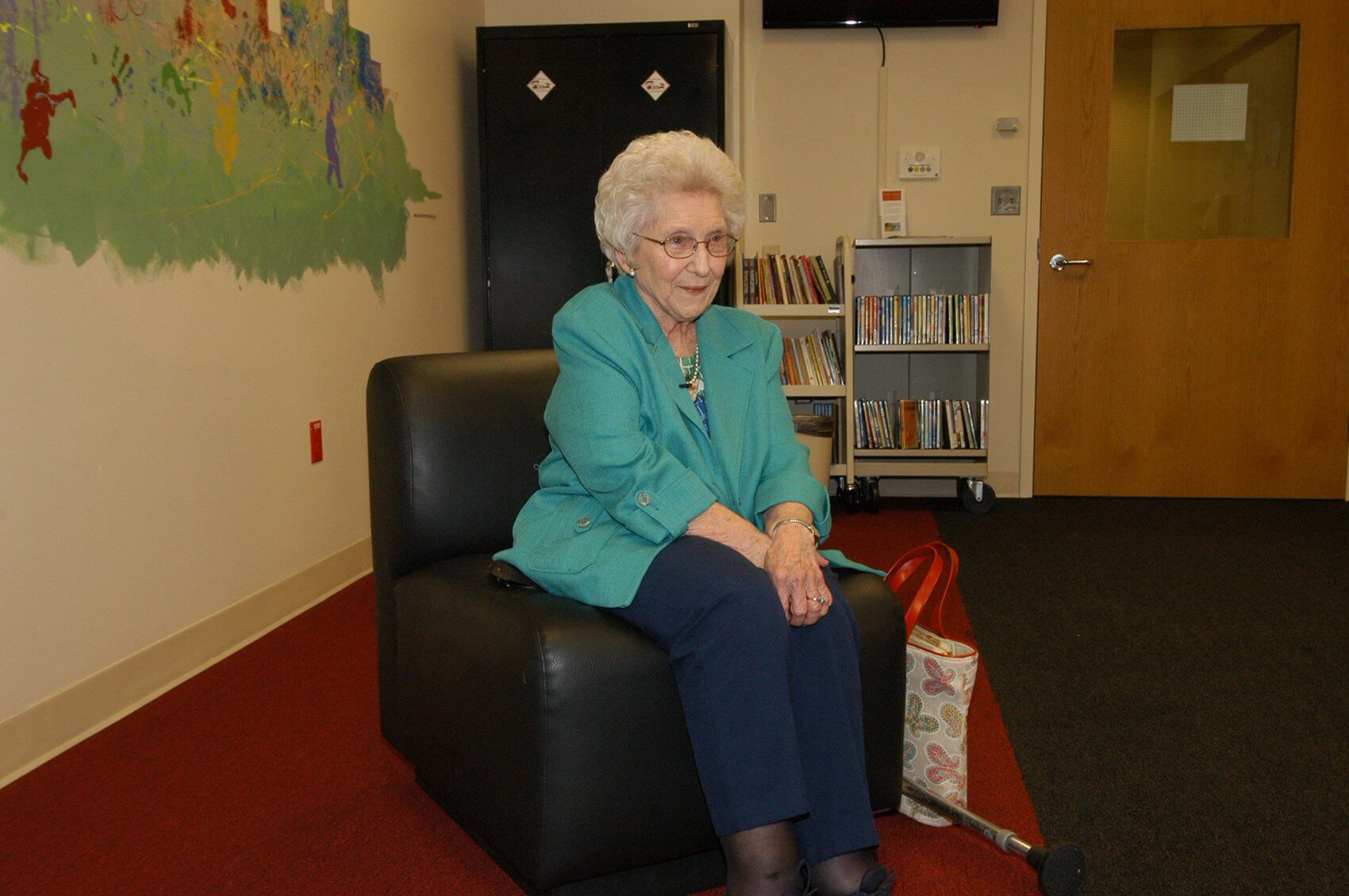 In the fall of 1935, Mary Richardson of Kountze, Texas, was a free-spirited 10-year-old who had the run of her house and could do as she pleased. By Thanksgiving of that year, the once lively Richardson had become immobile due to intense pain she felt throughout her body. That was the beginning of a years-long journey back to health that would lead her to Houston and Shriners Hospitals. Richardson recently recounted her experiences during a Shriners Hospitals for Children – Houston event celebrating the 91-year-old as the hospital’s oldest living patient.

After being seen by her local doctor back in 1935, Richardson’s father took her to Beaumont, Texas, to be evaluated by a surgeon. While in Beaumont, Richardson was diagnosed with osteomyelitis, and during surgery, her doctors realized her pelvis was completely involved.

“The doctors told my daddy there was not much else they could do for me and that he should take me home to be comfortable,” Richardson said. “Both of my parents were familiar with Shriners—my daddy was a Mason and my mother was an Eastern Star and they knew the orthopedic specialists in Houston would be able to help me.”

Richardson’s parents let her stay at home in Kountze for Christmas and her birthday in January, and then they brought her to the Shriners Arabia Temple Crippled Children’s wing of the original downtown Methodist Hospital in Houston.

“It was a culture shock for me when I first got to Shriners,” Richardson said. “I was the baby of the family and was very used to having my own room, and my parents were always right there when I needed them.”

Upon arriving to the children’s ward, Richardson was put in a room with seven other girls being treated at the hospital, and her parents were sent home. Once she was settled, she was seen by orthopedic surgeon Joe B. Foster, M.D., who attributed her bone condition to a Staphylococcal infection.

Over the course of four years at the hospital, Richardson developed what would be lifelong friendships with Foster and the nurses at Shriners. Through those years, Richardson attended such events as the Houston Livestock Show and Rodeo and Galveston travel outings, and participated in the annual Christmas party held by the Bluebird Ladies of the Methodist Hospital and Arabia Temple Shriners. She recalls, however, one Christmas that was very different from the others she had experienced while hospitalized.

“My daddy had been calling Dr. Foster for several weeks to see if he could take me out for Christmas day, and Dr. Foster said he could if the weather allowed, because I had been suffering from pneumonia,” Richardson said. “Christmas morning came as a cold and rainy day, but my daddy convinced Dr. Foster to let me spend the day at home with my family.”

When Richardson arrived back at the hospital, everything was gone. Following the Christmas party, the holly and greenery which had decorated the party area so beautifully ignited a fire that spread throughout the hospital.

“I was heartbroken, because that was my home, all my books and stationery, everything that was important to me was gone,” Richardson said. “Dr. Foster was so thankful that he had agreed to let me go with my family that day, because there were not many people on duty, and the bedridden patients were placed out on the lawn so the staff could get as many patients out of the hospital as possible.”

By December of 1939, Richardson realized she was actually healing for the first time in the four years she had been at the hospital.  By springtime, she went to Dr. Foster, saying that she felt ready to go home.

“I caught Dr. Foster one day and I said, ‘Don’t you think I can go home now?’ He was like a surrogate father to me, and we saw each other every day. He agreed that it was time for me to go home,” Richardson said.

After four and a half years in Houston, Richardson returned home to Kountze as a 14-year-old beginning high school. Her transition back to life outside of the hospital was much easier than she had anticipated.

“I don’t remember how I managed to get around carrying my books walking about with two crutches, but I figured it out and did it,” Richardson said. “My friends were very accepting of me, and I was just part of the group the same way I had been before I left.”

Richardson went on to study at Sam Houston State University where she met her husband. They went on to have two children, and they returned to Kountze to raise them and to take care of her parents who had taken care of her.

Today, at 90 years old, Richardson is Shriners’ eldest living patient, but that does not mean she has slowed down. She continues working and volunteering for several charities, including her work with Shriners Hospitals.

“Eighty years ago, when I was sent home because there was nothing more the doctors could do for me in Beaumont, the Shriners organization saved me,” Richardson said. “I don’t think that people realize today that is still happening to children. I think that donating to Shriners is the best money you can spend because it helps so many children who would not be able to see a doctor otherwise.”