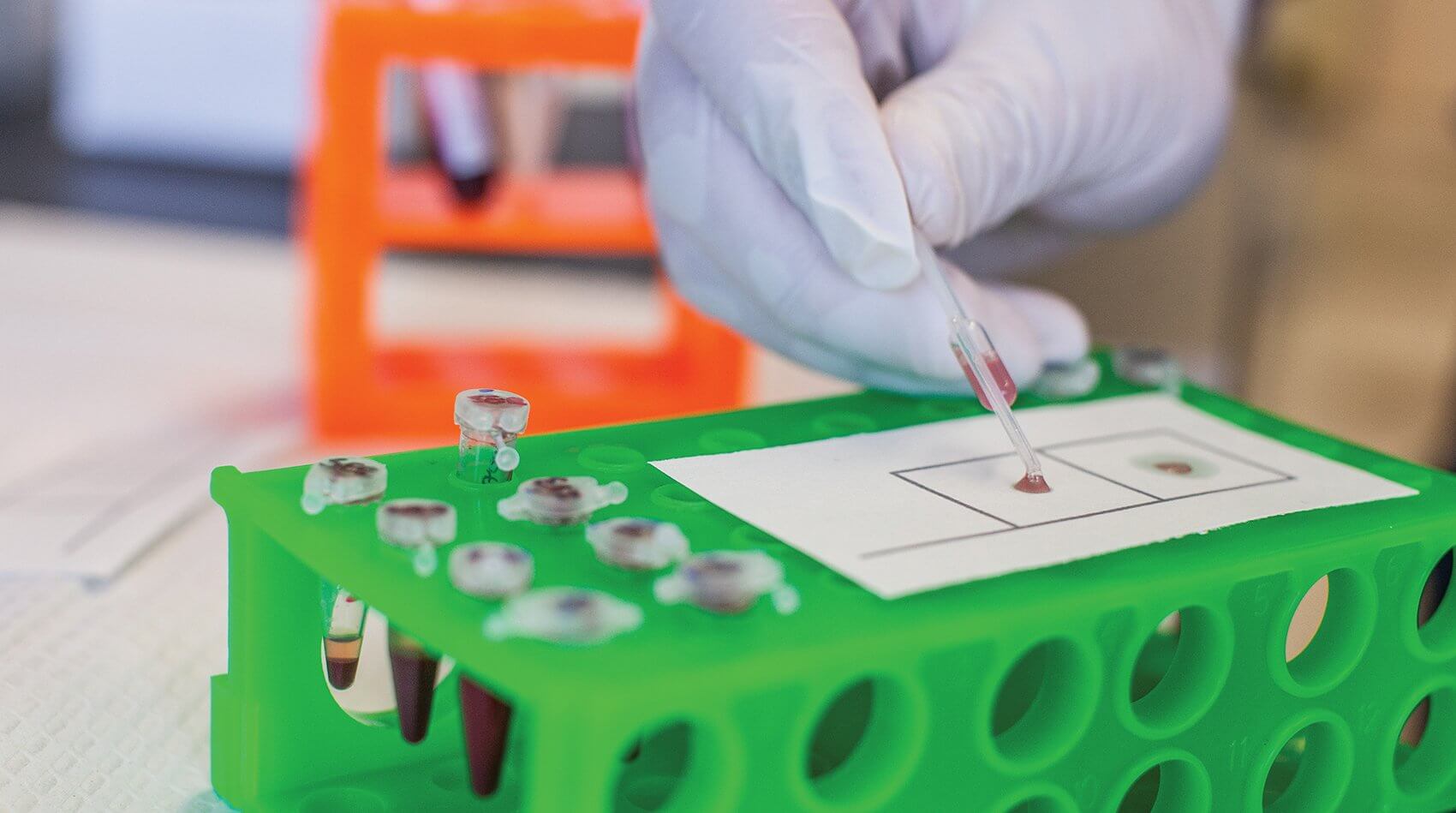 Each year, approximately 300,000 babies are born worldwide with hemoglobin disorders like sickle cell disease. Often their survival depends on the circumstances of their birth. For babies born in the United States, advances in diagnosis and treatment have led to a drastic reduction in mortality rate. For those born in countries like Angola, however, which has one of the highest rates of sickle cell disease in the world, the prognosis is markedly worse. The desire to combat this disparity led to a unique collaboration between biomedical engineers and physician-researchers to develop a low-cost, low-tech screening test with the potential to save millions of lives in medically underserved areas.

“The protocol currently used is something called isoelectric focusing, IEF, which is basically a gel where you run protein samples to look for the sickle hemoglobin,” George said. “It’s a very effective, robust technology that’s been used for a long time in the U.S. The problem is, first of all it’s relatively expensive. It’s about $5 a sample, which is a lot of money in Angola. Secondly, it takes a lot of resources. You need electricity, you need gels and also there’s a long turnaround time.”

IEF tests typically take about a month from sample collection to obtaining a result. By that time, parents have left the hospital with their newborns and notifying them of the test results can be difficult. George said the follow-up rate for babies who are diagnosed is typically between 30 and 50 percent, a significant problem when patient survival depends on early initiation of prophylactic treatment.

“One of the major complications early on is infection,” George said. “Babies with sickle cell disease are very prone to infection by a couple of bacteria. Historically, 50 to 90 percent of babies would die from these infections before reaching the age of five.”

Since the advent of prophylactic penicillin treatment, that percentage has been drastically reduced here in the U.S., where very few babies die from sickle cell-associated infections in early childhood. In sub-Saharan Africa, it’s a different story. George and Shevkoplyas aim to change that with a simple piece of paper—a screening test that costs less than 15 cents.

“We position our test as a very inexpensive way to screen every baby born in Angola for identifying those at risk of having sickle cell disease,” Shevkoplyas said. “When you start talking about countrywide population screening, every cent counts, especially in a country with limited health care resources.”

The paper-based test screens for sickle hemoglobin, or hemoglobin S, the abnormal hemoglobin those suffering from sickle cell disease carry in their red blood cells. When deoxygenated, hemoglobin S polymerizes and causes the red blood cells to develop a rigid, sickle shape. These unusually shaped cells can have difficulty passing through blood vessels, resulting in blockages that lessen the amount of oxygen delivered to bodily tissue.

“The idea of the test is, you do a heel stick on an infant. You take the blood, mix it with the hemoglobin solubility buffer, wait a few minutes, then use a disposable pipette to put it on the paper,” said Nathaniel Piety, a Ph.D. student in Shevkoplyas’ lab at UH.

As the stains on the paper dry, blood containing hemoglobin S will develop a distinctly different pattern from normal blood, as the molecules of deoxygenated hemoglobin S clump together in a dark center spot rather than spreading evenly.

The idea of using stains on paper to analyze hemoglobin S came from a flash of inspiration that occurred as Shevkoplyas was engaged in a simple, every day task: brewing coffee. Looking at coffee stains on a napkin, Shevkoplyas wondered why it dried into certain shapes.

“It’s a uniformly colored liquid, so why does it make these interesting patterns?” he recalled thinking. He considered various papers he had read by physicists studying coffee stains and why they form the way they do. “I thought, ‘Why don’t we try the same thing for sickle cell disease?’ And so, here we go, it actually works.”

As a result, with very little training and the most basic of resources, any health care worker can administer the test and be able to tell within minutes whether an infant has sickle cell disease, carries the sickle cell trait, or has neither disease nor trait. In November 2014, with the support of a pilot grant from the Baylor College of Medicine Center for Global Initiatives, George and Piety traveled to Angola to compare the effectiveness of the test to the standard of care. In Angola, they were able to teach local workers how to administer and interpret the test within just an hour of training.

“The standard screening test takes a lot of training and requires a lot of equipment, and then to interpret the results takes a lot of effort,” George said. “I think our test is also more accurate than the gel. Often we would have what we thought was a false positive, when our test said a patient has sickle cell disease and the gel said no. But when the gel test was repeated, it would come back positive.”

The paper test has additional applications even beyond basic screening. With some simple image analysis, it can also fairly accurately quantify the amount of hemoglobin S in the blood. This could make it useful during transfusion therapy, which is one of the main ways to manage sickle cell disease.

“You’re shooting for a target amount of sickle hemoglobin [during transfusion therapy],” Piety said. “If you stay below that level you’ll be relatively healthy, but you don’t necessarily know if you’ve hit that target, or gone far beyond it, causing negative side effects of over-transfusion.”

Clinicians could administer the test to patients throughout transfusion therapy, and use something like an app on their smartphone to snap images of blood stains and analyze the amount of hemoglobin S in the blood sample. While this doesn’t provide a perfectly precise number, Shevkoplyas and his students found it is accurate enough to be useful in the clinic.

“This would let clinicians know, ‘Can we stop now? Should we keep going?’ and allow them to tailor the therapy more to an individual,” said Piety, who was recently awarded a two-year predoctoral fellowship from the American Heart Association to develop the test as a tool for monitoring hemoglobin S levels at the bedside.

Halcyon Biomedical Incorporated, a startup company Shevkoplyas co-founded, received a Small Business Innovation Research (SBIR) grant from the National Institutes of Health to commercialize the test. In collaboration with Halcyon, Shevkoplyas and George recently applied for follow-up funding from the NIH with the hope of running more studies and eventually seeking FDA approval. Their ultimate goal is for the test to become a routine screening tool for all babies born in Angola and perhaps around the world.

“This really has applications not just in sub-Saharan Africa,” George said. “As we develop these low-cost, high-efficiency technologies for other countries, they could come back to the U.S. and potentially reduce the cost and improve the quality of health care here.”

Shevkoplyas and George said this innovation is symbolic of the opportunities for collaboration that are rife within the medical center. The large population of patients, numerous opportunities for research and institutionalized interest in improving global health all contributed to making the project possible.

“You have everyone coming together, with the support of the Angola government, Chevron, Baylor, Texas Children’s, UH—we bring it all together to make an impact on actual patients,” Shevkoplyas said. “This is a dream for any biomedical engineer. Here we have a chance to, in a relatively short period of time, make this test available for
use in clinical practice and make a real impact on the health and wellbeing of millions of children worldwide.”