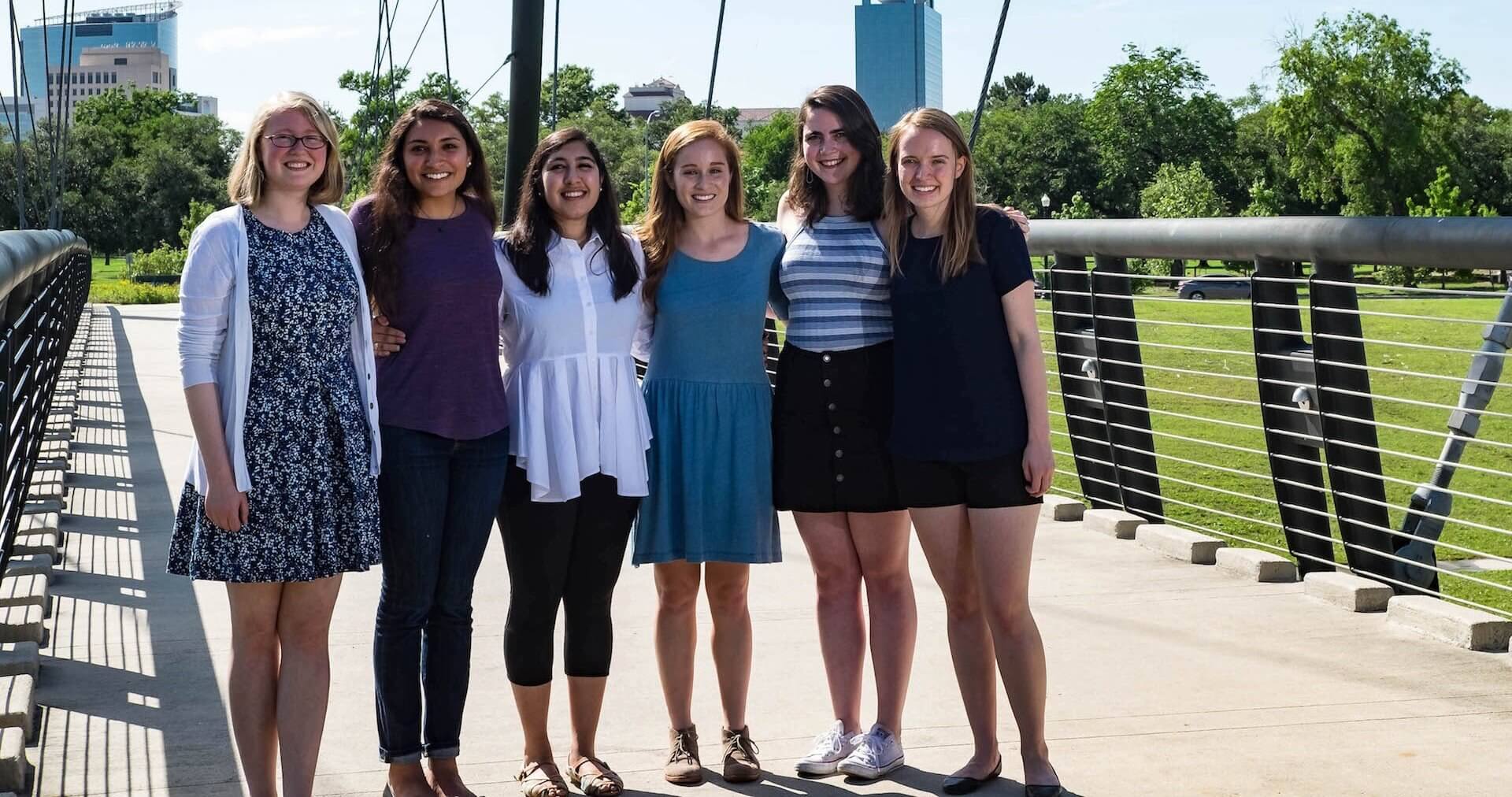 Few Rice University engineering students see the potential of their senior projects as graphically as those who designed flood remediation enhancements for Houston’s Brays Bayou.

The team calling itself Brays Yourself was one of two to win the top prize of $5,000 at the university’s Engineering Design Showcase in mid-April for its plan to relieve the bayou’s neighbors, particularly in the Meyerland and Texas Medical Center neighborhoods, of flooding fears that come when the mostly concrete channel overflows its banks.

Three days later, April 17 and 18, historic flooding in Houstonshowed just how valuable such a plan could be. The waterway overflowed again in Meyerland, flooding some of the same homes damaged in the severe 2015 Memorial Day flood that also killed seven people.

The team’s capstone design project, required of most Rice engineering seniors, is intended to enhance the ongoing and long-term Project Brays, a flood remediation project managed by the Harris County Flood Control District and the U.S. Army Corps of Engineers. The Rice additions would redesign the Greenbriar Drive traffic bridge, south of the Rice campus, while adding retaining walls in the Greenbriar and Meyerland areas and a detention pond for emergency floodwater storage on the east side of Meyerland south of the bayou.

Their proposal for the bridge would remove two of the four sets of piers currently in the water. “It will have two piers that sit on the side slopes of the channel,” said Rice senior Julianne Crawford. “Unlike the current Greenbriar bridge, our design eliminates obstructions to the primary flow, allowing increased conveyance through the channel.”

She and her teammates, Marie Gleichauf, Avi Gori, Sam Greivell, Jinal Mehta and Kasia Nikiel, all civil engineering majors, said the enhancements would remove 453 homes from the 100-year floodplain in addition to those protected by Project Brays. (A 100-year storm is one that has a 1 percent chance of occurring in any given year.) They estimate their plan would add about $30 million to the nearly half-billion-dollar cost of the overall project.

The team based some of its calculations and all of its designs (detailed in their poster) on the grand bayou plan, even though it won’t be done for years to come. They used much of Project Brays’ previous work as a foundation for their own plans, even meeting with one of its managers.

“There aren’t many drastic changes that can be made to the bayou beyond the Project Brays proposal,” Nikiel said. “There are dual issues: Because the area is so flat, the elevation differential that drives the water through the city and into Galveston Bay isn’t very high, and this means the channel can’t be much deeper than it already is.

“And there’s the width aspect: There’s so much urbanization along all of the channels that there’s limited space,” she said. “You have to start getting creative. Ultimately, because of the way Houston’s set up, it’s unlikely all flooding will be mitigated. At this point it’s a matter of figuring out how much you can do and to warn people. That’s where flood alert systems come in.”

The replacement bridge near the Texas Medical Center, which would reflect the design of a footbridge downstream, was one sensible way to increase flow. The center already has a measure of protection due to the efforts of Rice civil engineer Phil Bedient, who designed a highly successful Flood Alert System nearly 20 years ago. Bedient, the team’s faculty adviser, is director of the Rice-based Severe Storm Prediction, Education and Evacuation from Disasters Center.

When the team got its assignment last fall, the Meyerland neighborhood that lies southwest of the city’s center seemed like an obvious place to focus the rest of their efforts. Thousands of Meyerland homes on both banks of Brays suffered significant damage in the Memorial Day storm, which dropped more than 10 inches of rain in just a couple of hours along a narrow path that centered on the bayou.

“Meyerland has had issues for a long time,” Gleichauf said. “I think it’s noteworthy because of the severity of the flooding and how often it happens. Pretty much all the homes built there are below baseline flood elevations, which would not happen today because of FEMA regulations.”

“Even without the Memorial Day storm, Meyerland would have caught our attention anyway because of the extent of the flood plain,” Greivell said. “It’s huge.”

The students calculated new 3-foot retention walls that would cut away part of the earthen slopes below grade to increase capacity (while not spoiling views) would help speed water through the channel. Some of that water would flow into a new 29-acre detention basin, similar to one built just to the east within the last decade. They acknowledge that part of the project would require the demolition of dozens of homes, a cost they did not factor into their budget.

That said, the project forced them to factor social, economic and political considerations into their thought process. “There are so many nuances that we’re still grappling with and trying to understand because of the scale of the problem,” Nikiel said.

One such factor is the way storms are classified. “We were told the May 25 storm was a 100-year storm,” Gori said. “We’re being told that this week’s storm was a 200-year storm. That we’re seeing these storms so frequently points to the fact that we are not characterizing storm magnitudes correctly.

“Texas uses TP 40, a paper released by NOAA (the National Oceanic and Atmospheric Administration) in the ’60s,” she said, noting it determined a 100-year storm drops 12 inches of rain in 24 hours, a total upgraded to 13.5 inches after 2001’s Tropical Storm Allison. “It’s clear from the magnitude and frequency of storms we’re seeing now that we need to reassess our flood risk. We should be upgrading all our infrastructure systems to meet the more severe rainfall we’re experiencing.”

The students said they were grateful for the chance to dig into a project with significant social consequences, even if their plans never come to pass. “We were all really interested in how we can help mitigate these urban hazards, as they take Houston by surprise sometimes,” said Mehta, a native of the city. “We wanted to see how we could use our senior design project to get a better understanding of these issues.”