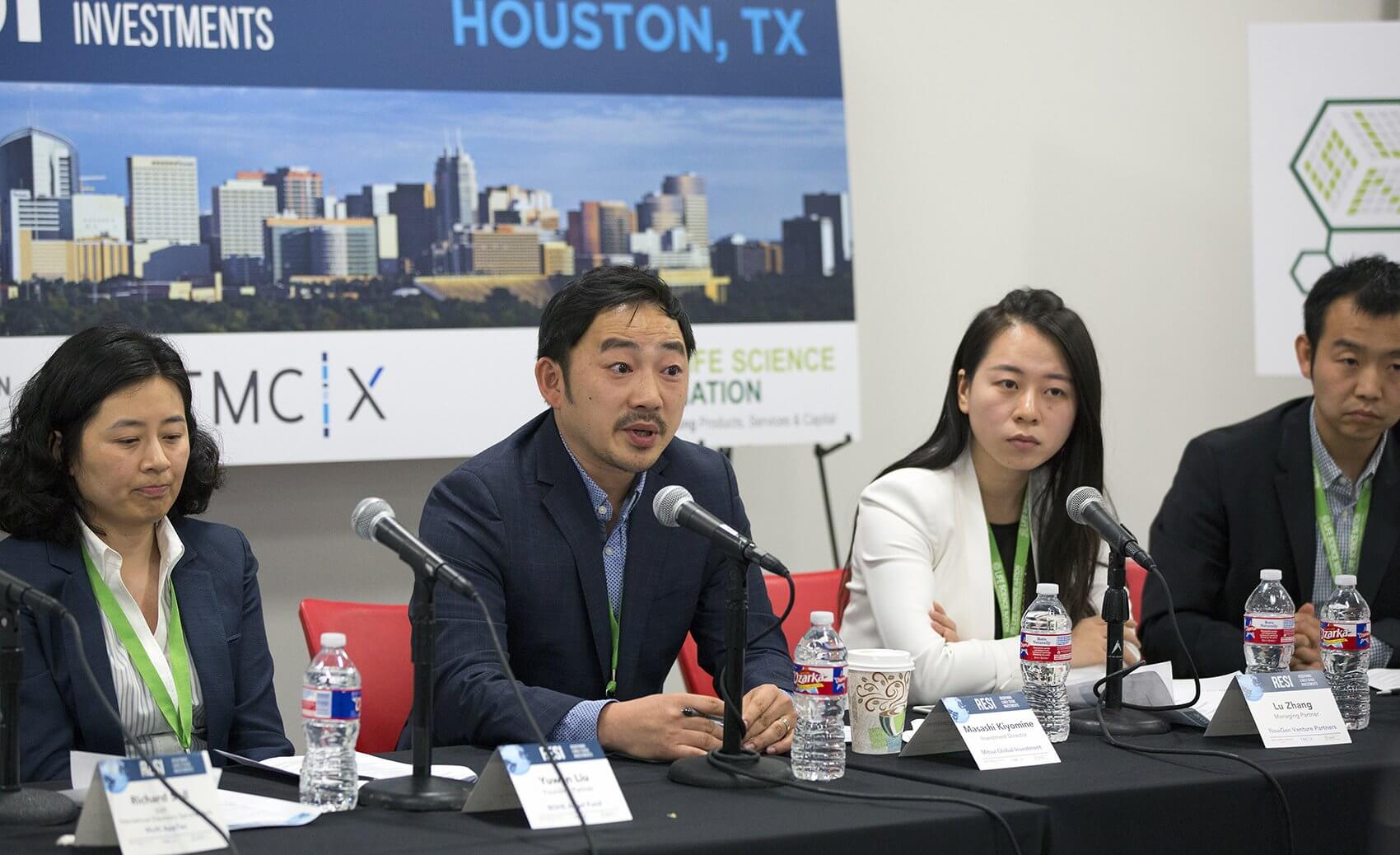 The TMC Innovation Institute was buzzing April 12 with more than 400 guests as they attended Redefining Early Stage Investments, or RESI@TMCx for short.

Over in one corner, more than 700 meetings went on between 250 fundraising executives and more than 150 investors. In another, people were presenting entrepreneur workshops on various topics including how to value a startup, crowdfunding, research and development tax credits and branding and messaging.

Investor panels took place in two areas of the main space with panelists discussing angel investing, industry-specific investor strategy, health systems and how to get in front of global investors.

Texas Medical Center President and CEO Robert C. Robbins, M.D., welcomed guests to the conference, noting the large number of attendees who came from outside of Texas.

“Our goal is to make Houston a globally competitive commercialization and innovation center,” he added. “If you want to do a clinical trial across all 56 institutions, you can now come to a one-stop shop, and we will give you a ‘yes,’ ‘no,’ ‘up’ or ‘down’ pretty quickly.”

“The Future is Now” panel, featuring Lesley Stoltz, Ph.D., senior director of transactions at Johnson & Johnson Innovation; Judi Manis, RVP of strategic relations and business develipment, and Internet of Things Health Care for AT&T Foundry; and Erik Halvorsen, Ph.D., director of the TMC Innovation Institute, also touched on what Houston needs to do to compete.

Early-stage funding is an issue, in part because investors say they have enough good prospects in their own backyards without having to travel to Houston, Stoltz said. She also mentioned that it was one of her goals to change that school of thought.

Dennis Ford, founder and CEO of Life Science Nation, the conference creator, says it is hard to get people to come to Houston even though there is plenty going on in the technology and life sciences industries.

However, he noted that more investors came this year — the second RESI in Houston — than last year, and more meetings took place.

RESI began in Boston and expanded to San Francisco and Houston. On June 23 of this year, RESI will go to its fourth location in Toronto, offering a conference for fundraising executives every 90 days.

For fundraising executives, that means they can create 80 meetings a year with potential investors, Ford said.

“Fundraising is basically a numbers game, so your chances are significantly higher to create a dialogues, build relationships and get an allocation,” he added. “This is what we are all about here.”

Megan Hill, business development manager for Brisbane, Australia-based Clinical Network Services, is based in San Francisco, and the RESI conference was her first time coming to Texas for meetings.

“The RESI conference is a good one for us,” she said. “Our client profile is small, scrappy biotech companies and early-stage, preclinical, so it is perfect for us.”

In addition to panels, meetings and workshops, there is also the RESI Innovation Challenge during which 30 companies compete for “RESI dollars” from attendees who listen to their pitches. The three winning teams receive tickets to upcoming RESI conferences.

Among the 30 companies, those within the Innovation Institute family that were selected for the challenge included Greenlight Medical, Medical Informatics, DocResponse, Saranas, CareSet Systems, Adhesys, Will 2 Love and Valera Health.

“The challenge adds some fun to the conference, and it is a great opportunity to practice your pitch and showcase your innovation,” said Josephine Engreitz, program manager of Valera Health.