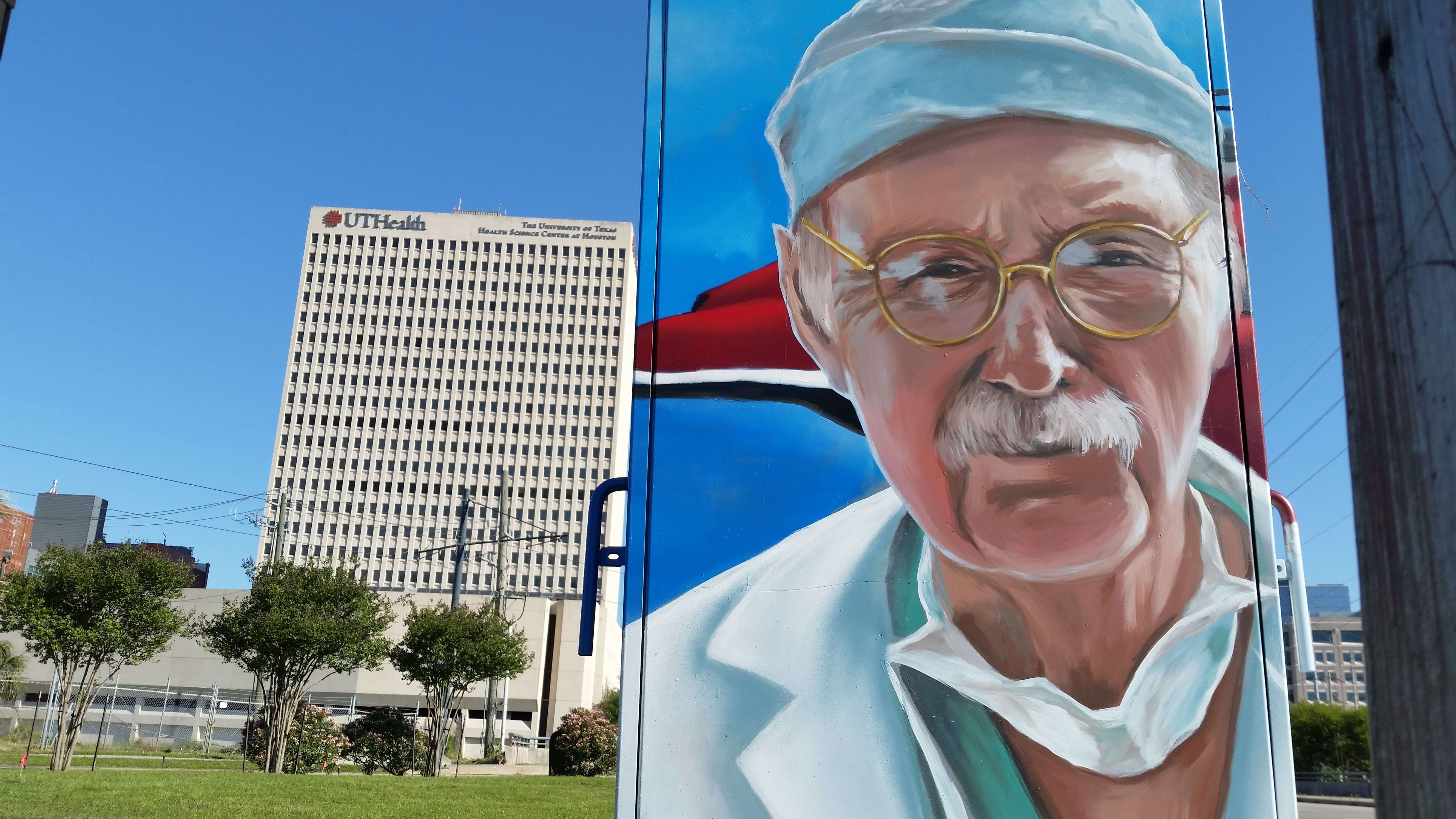 On a Sunday afternoon in mid-March, two urban artists, armed with cans of spray paint, gathered at the corner of Fannin and Braeswood to honor the memory of a hero who made his own indelible mark on the Texas Medical Center.

“Dr. Duke was such an influential part of the Texas Medical Center and Houston,” said Elia Quiles, co-founder of UP Art Studio. “We wanted to recognize his tremendous legacy in the Mini Murals Project’s Heroes and Icons series.”

Dr. Duke was indeed a one-of-a-kind hero and Texas icon. The John B. Holmes Professor of Clinical Sciences at UTHealth was known for his extraordinary patient care and efforts to train medical students and surgeons. A true pioneer, in 1972 he became one of UTHealth’s first faculty members at its newly established medical school. Four years later, he helped to develop Memorial Hermann Life Flight® and served as the medical director of the program for almost four decades.

As a result of his nationally syndicated television news program, Texas Health Reports, he became one of the most recognized personalities in his field. For the mural, the artists’ goal was to capture Dr. Duke’s personality, along with his trademark bottle-brush mustache, military issued wire-rimmed glasses and scrub cap.

The Mini Murals Project, which is directed by UP Art Studio, is designed to bring art to unexpected places, instill civic pride and enhance Houston’s urban landscape.

“Dr. Duke, a renowned surgeon, was one of the most humble, ethical, brilliant and hardworking doctors for the many who knew him, his hundreds of patients and his colleagues as well as hospital staff,” Green said. “It is my pleasure to have had the opportunity to have the likeness of this extraordinary doctor painted as a mini mural to be located in the Texas Medical Center where we can say he has been memorialized to be remembered by all who knew and admired him.”

In addition to Green, the public art project has support from the City of Houston Mayor’s Office of Cultural Affairs, the city’s Department of Public Works and Engineering, Houston Arts Alliance, Fresh Arts and the Brays Oaks and Five Corners management districts.

It was the vision of Pilot FX to create a mini mural of Dr. Duke, who was often described as being “larger than life.” Pilot FX collaborated with Ronen to paint the portrait, landscape and images of Memorial Hermann Life Flight® helicopters.

Though the mural was unveiled to passersby in the Texas Medical Center on Sunday, March 13, Ronen reports it is not quite finished. She has plans to paint an image of the renowned surgeon and medical educator’s beloved dog Jake on the back of traffic signal control cabinet. “Red was so humble, he would probably be prouder to see Jake’s image on the mini mural than his own,” said Sara Duke, one of Dr. Duke’s daughters.

Bryant Boutwell, Dr.P.H., Duke’s friend and biographer, said, “Red would be tickled to see the mini mural given his enjoyment of landscape painting himself. Everyone knows he was a proud Texan with a country doctor attitude and the skills of a big city surgeon, but few probably know that he was also a painter. He never considered himself a great talent but over the years his work improved yet he was always mystified when someone bought one of his paintings to support a good cause. For Red, painting was a great escape. In his own words, ‘When you paint, you really kinda’ enter another world.’”

If you visit the mini mural at the corner of Fannin and Braeswood and take photos for your social media channels, please consider using the hashtags #DrRedDuke and #MiniMuralsHou.