After a brain tumor left him unable to walk for nearly a year, a 10-year-old Haitian boy traveled to the Texas Medical Center to receive a life saving surgery 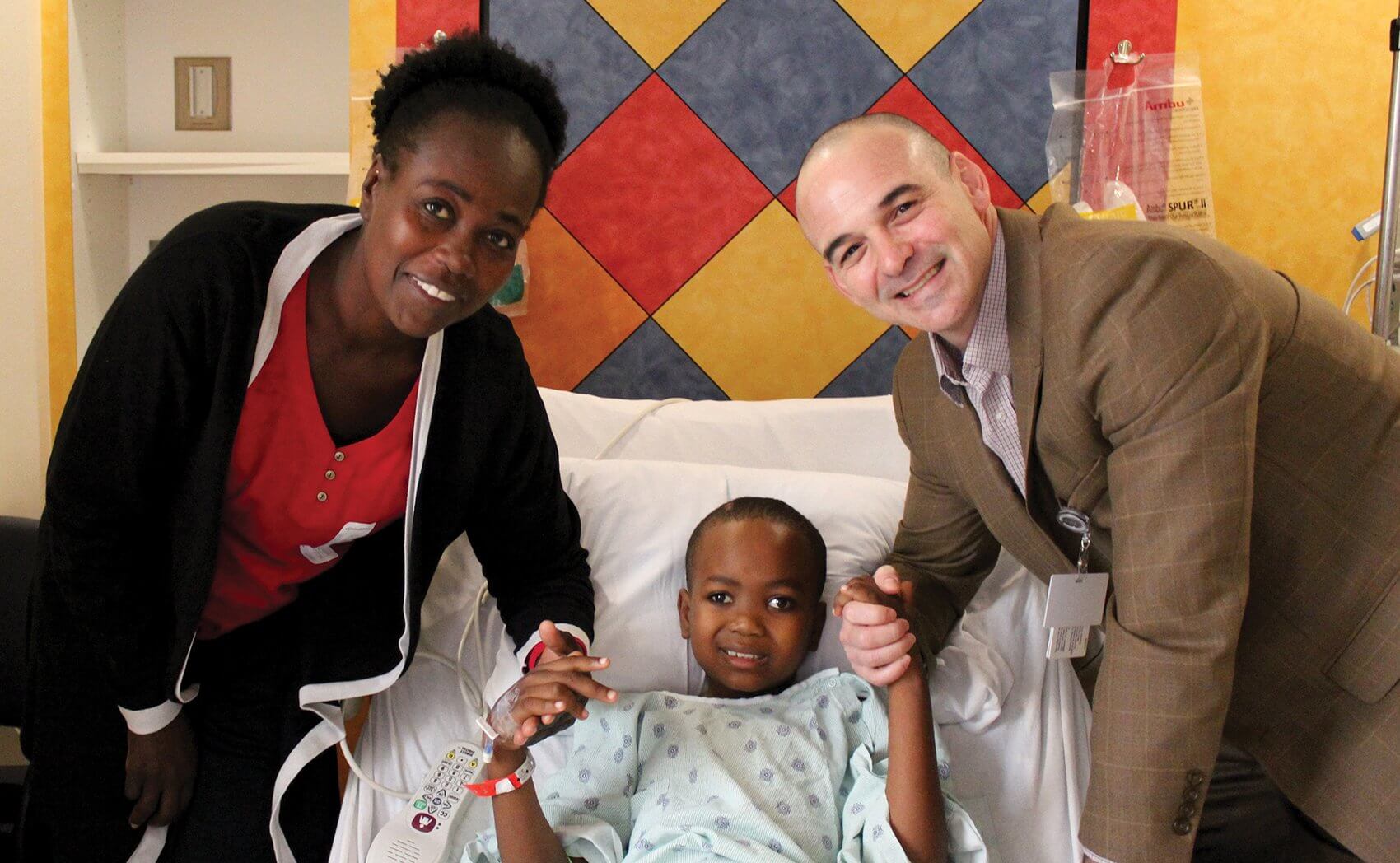 For the past three years, UTHealth pediatric neurosurgeon David Sandberg, M.D., has led a group of nurses from Children’s Memorial Hermann Hospital and residents and physicians from McGovern Medical School to Haiti to provide neurological care for Haitian children who would otherwise not receive it.

The team members use their own vacation time to travel to the Hospital Bernard Mevs in Haiti for five days in early December, leaving Houston with suitcases packed to the brim with medical supplies they collected over the past year to ensure they have everything they need to care for their patients as they do here in the United States.

“The need is overwhelming,” said Sandberg, director of pediatric neurosurgery at Children’s Memorial Hermann Hospital and Memorial Hermann Mischer Neuroscience Institute (MNI) at the Texas Medical Center. “There are no pediatric neurosurgeons in Haiti, and families come from all over the country for care when they hear that a team from the United States is coming. Most of the children have diseases which are very advanced because of their lack of access to care.”

“It is like doing a year’s worth of work in five days,” said Linda Mobley, operating room clinical coordinator at Children’s Memorial Hermann Hospital. “We will see and treat as many patients as we can and we usually work from sun-up to sun-down every day.”

During their most recent trip in December 2015, Sandberg and his team met a 10-year-old boy named Caleb who had been unable to walk since March 2015. After an examination, Sandberg realized Caleb was suffering from hydrocephalus—a buildup of fluid in the cavities deep within the brain—caused by a massive tumor in his brain. The tumor had been growing and pressing down on Caleb’s brainstem, leaving him with severe headaches and unable to walk.

UTHealth pediatric neurosurgeon Manish Shah, M.D., Sandberg’s partner at Children’s Memorial Hermann Hospital and MNI, and a fellow volunteer in Haiti, performed an endoscopic third ventriculostomy—a minimally invasive procedure to treat the hydrocephalus. Caleb’s headaches improved. He still needed surgery to remove the tumor, a procedure that would take eight hours and would not be safe to perform in Haiti, given the lack of resources.

“Caleb’s tumor had reached a critical point and it was causing severe pressure on his brainstem, which controls heart rate, blood pressure and breathing,” Sandberg said. “Short of us going to Haiti and finding Caleb, he would have eventually slipped into a coma and died.”

Once Sandberg returned home, he immediately began working to bring Caleb to the United States for surgery. His first stop was to see Susie Distefano, chief executive officer of Children’s Memorial Hermann Hospital.

“I told Ms. Distefano about Caleb. I informed her that he would need an eight-hour brain surgery, several days in the intensive care unit, MRI scans, and require anesthesia, among other things. Immediately, she said, ‘Bring him!’ and that was it,” Sandberg said. “Most hospitals would have turned him away.”

Knowing the surgery could now be done, Sandberg and his team worked on getting Caleb to Houston. They needed visas, passports and flights for Caleb and his mother. Dick Bassett, a philanthropist and friend of Sandberg’s who had joined the team on the mission trip to Haiti, offered to pay for the flights for Caleb and his mother, in addition to helping Memorial Hermann with some of the surgery costs.

“Dr. Sandberg performed a miracle for my family when he removed my son’s brain tumor, and I would have done anything in my power to help him bring this beautiful boy to Houston to save his life,” Bassett said.

The team also needed a place for Caleb and his mother to stay for the duration of their time in Houston. Sandberg’s assistant, Tacarra Logan, reached out to the Haitian community of Houston through Facebook and found that they were eager to help.

“When we heard they were coming to Houston for this surgery, we wanted to do anything we could to help,” said Sheagan Nyei, who was part of Caleb’s Haitian host family. “I have a seven-year-old son and if I were in this situation—in a foreign country not knowing anyone—I would want someone to help me through it as well.”

After a month of planning, Caleb and his mother arrived in Houston, welcomed by the Haitian community and the Children’s Memorial Hermann Hospital staff. Caleb underwent the eight-hour surgery to remove his brain tumor and was taken to the hospital’s pediatric intensive care unit. Within the week, he began walking for the first time in 10 months.

“This whole experience has been a little surreal, meeting Caleb in Haiti and all of a sudden he is here in our operating room and we are able to save his life,” Sandberg said. “Saving the life of any child is meaningful, but saving the life of a child from the poorest country in our hemisphere who had no hope of living without this surgery feels like our own small miracle.”

During his recovery at Children’s Memorial Hermann, the entire hospital came together to make sure Caleb enjoyed his time in Houston. Mobley and her grandchildren brought winter clothing for Caleb and his mother in addition to Valentine’s Day presents.

“We forget how lucky our children are to live in the United States and have access to quality medical care. I wanted to share Caleb’s story with my family to show them the importance of giving to others,” Mobley said. “This Valentine’s Day, they learned that lesson when they picked out valentines for Caleb instead of presents for themselves.”

“The food here has been confusing to us,” said Bernita, Caleb’s mother. “It means a lot to me that they would take the time to make us a meal we are familiar with.”

Shriners Hospitals for Children-Houston has been providing inpatient rehabilitation treatment for Caleb since his release from Children’s Memorial Hermann Hospital. Shriners Hospitals for Children-Houston specializes in orthopedic care and provides care regardless of the family’s ability to pay. Since Caleb had been unable to walk for the better part of a year, it will take time and therapy for him to walk and move independently.

“Caleb has been through a lot over the past year and things are going to be very different for him now,” said Glendaliz Bosques, M.D., medical director of the Shriners Hospitals for Children-Houston Pediatric Rehabilitation Program. “We hope that the work we are doing here will allow Caleb to find himself again and allow him to function independently.”

Upon returning to Haiti, Bernita hopes that her son is able to get back to life as a 10-year-old.

“I am so thankful for Dr. Sandberg, Children’s Memorial Hermann Hospital, Shriners Hospital, the Haitian community, our church and everyone else who has helped us through this experience,” Bernita said. “My biggest hope is that Caleb can return to school and play with his brothers and sisters again.”