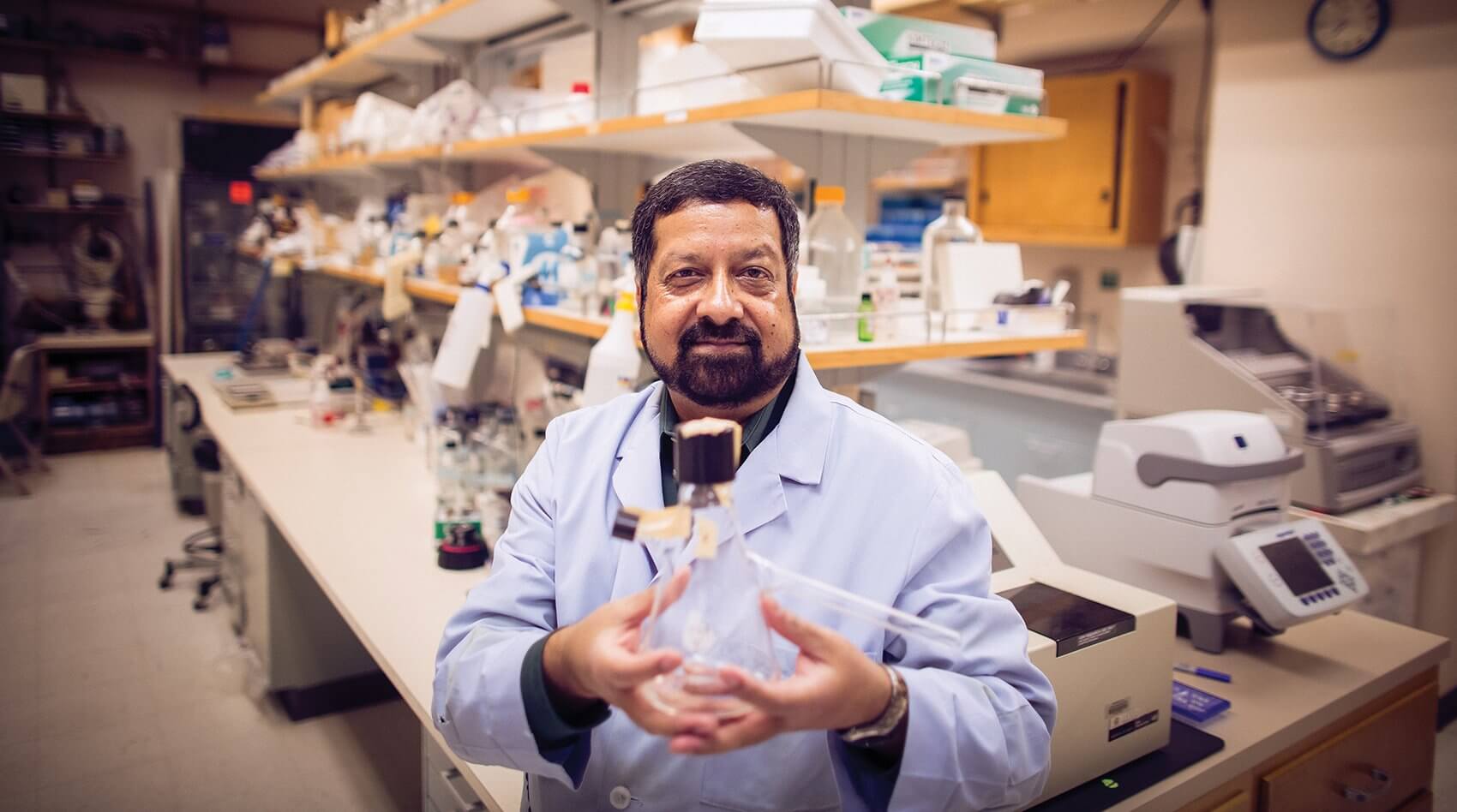 Necrotizing fasciitis, commonly known as flesh-eating bacteria, is as horrific as it sounds. Lurking in fresh and brackish water in warm climates such as ours, it infiltrates the human body through open cuts in the skin or by consuming undercooked seafood sourced from infected areas. Once inside, the microbes spread quickly and aggressively, sometimes liquefying muscles and crippling organs within mere hours. Immediate treatment—including intravenous antibiotics and rapid surgical intervention—is required, but even with these efforts, the infection can leave individuals severely debilitated and often proves fatal.

Ashok Chopra, Ph.D., professor of microbiology and immunology at The University of Texas Medical Branch at Galveston (UTMB), is hoping his groundbreaking research will change these outcomes for the better. Chopra, in partnership with colleagues from the Food and Drug Administration, CosmosID Inc., the University of Maryland and Johns Hopkins University, recently published a study in Proceedings of the National Academy of Sciences detailing a shocking discovery about the nature of this bacteria and the mechanisms with which it infects the human body.

Analyzing a human sample of Aeromonas hydrophila, the species of bacteria responsible for necrotizing fasciitis, Chopra and his team discovered that there were actually four different strains involved, rather than one. What’s especially interesting was how the strains interacted with each other: three of the four strains were clonally similar, worked together, and produced a toxin called Exotoxin A (ExoA), which breaks down muscle tissue and allows the fourth, phylogenetically distinct strain to move throughout the body and attack other organs. Although the fourth strain produces no ExoA and isn’t as virulent as the others, enabled by the former three, it is the one that caused the most catastrophic damage to the body. Even more, the fourth strain has the ability to kill the other three strains after they’ve done their job, ensuring it has no competition—a hallmark of species endurance and one of the reasons the infection is so persistent.

These discoveries were made possible through the use of new technology developed by CosmosID, a bioinformatics company focused on rapid identification of microorganisms for infectious disease diagnostics as well as a host of other applications benefitting general public health. Utilizing metagenomics—sequencing the DNA of a sample acquired directly from its natural environment (such as an infected human) rather than one cultivated in a petri dish—CosmosID analyzes the samples with such precision that it can differentiate between different species of the same microorganism. In the case of Aeromonas hydrophila, distinct biomarkers revealed the existence of the multiple strains. By studying where those strains traveled in infected individuals, the research team was able to gain insight into their behavior.

To verify the findings, Chopra and his colleagues at UTMB set out to test the results via an alternative method: bioluminescence imaging. By embedding into the bacteria DNA that encodes a luminescent protein that emits light (think fireflies and glowing marine creatures), they were able to track the different strains in a mouse model and confirm that only the less virulent one reached organs such as the liver and spleen.

“We were very excited,” Chopra said. “We had two independent labs using two entirely different techniques, and we came up with the same data. It’s such a good correlation and it lays the foundation for setting up additional studies and moving forward with developing new therapeutics.”

Indeed, this discovery has the potential to revolutionize the way physicians address necrotizing fasciitis.

“I think what is really important to understand is that, before, infection was considered to be mono-microbial if the one species of the organism is involved,” Chopra explained. “Now we know that it’s not, it can be poly-microbial in some cases—it was four distinctive strains that belong to the same species, as we found. This completely changes the way the infection should be treated.”

In fact, according to Chopra, it is not unlikely that the four strains would have different antibiotic resistances. As such, a tailor-made cocktail of antibiotics would be required to effectively combat the infection; before, physicians were prescribing based on the belief that just one strain of bacteria was at play (and if that was the predominant strain, the antibiotic treatment was based on that strain).

“Often, patients may not respond well to the antibiotics. Knowing what we know now, it’s likely that one or more of the strains was resistant.”

Even better news is that knowledge of the existence of the ExoA toxin means there is another tool available in the fight against this infection: antibodies.

“Now that we know of the presence of ExoA, we can treat patients not only with the antibiotics for the bacteria, but also antibodies appropriate for neutralizing this toxin,” Chopra said. “It’s the same technique we used to fight Ebola during the 2014 epidemic. Patients were given blood from survivors in hopes that it carried with it antibodies capable of fighting the virus. It’s the exact same principle, and it’s a powerful tool for fighting infections such as these.”

Necrotizing fasciitis is rare, with only about 650 to 850 cases each year in the United States according to the CDC. For those individuals suffering from the infection, this research has the potential to create both limb- and lifesaving treatment options, and it doesn’t stop there. The same metagenomics technology can be applied to countless other bacterial and viral infections, paving the way for faster, better, more customized therapeutics. CosmosID plans to continue to build its database with hopes that one day it will have the ability to match up samples of any kind of pathogen quickly—and with it, provide instantaneous information on the treatment options available.

“This could be a game-changer,” Chopra said. “When we started out, I really didn’t know what we would get out of all of this, but it turned out to be a good story in the end. Moving forward, I think this will continue to lead us to something even better.”