Giving the Gift of Gait

For those suffering from spasticity conditions, being able to put one foot in front of the other is a life-changing experience

Giving the Gift of Gait 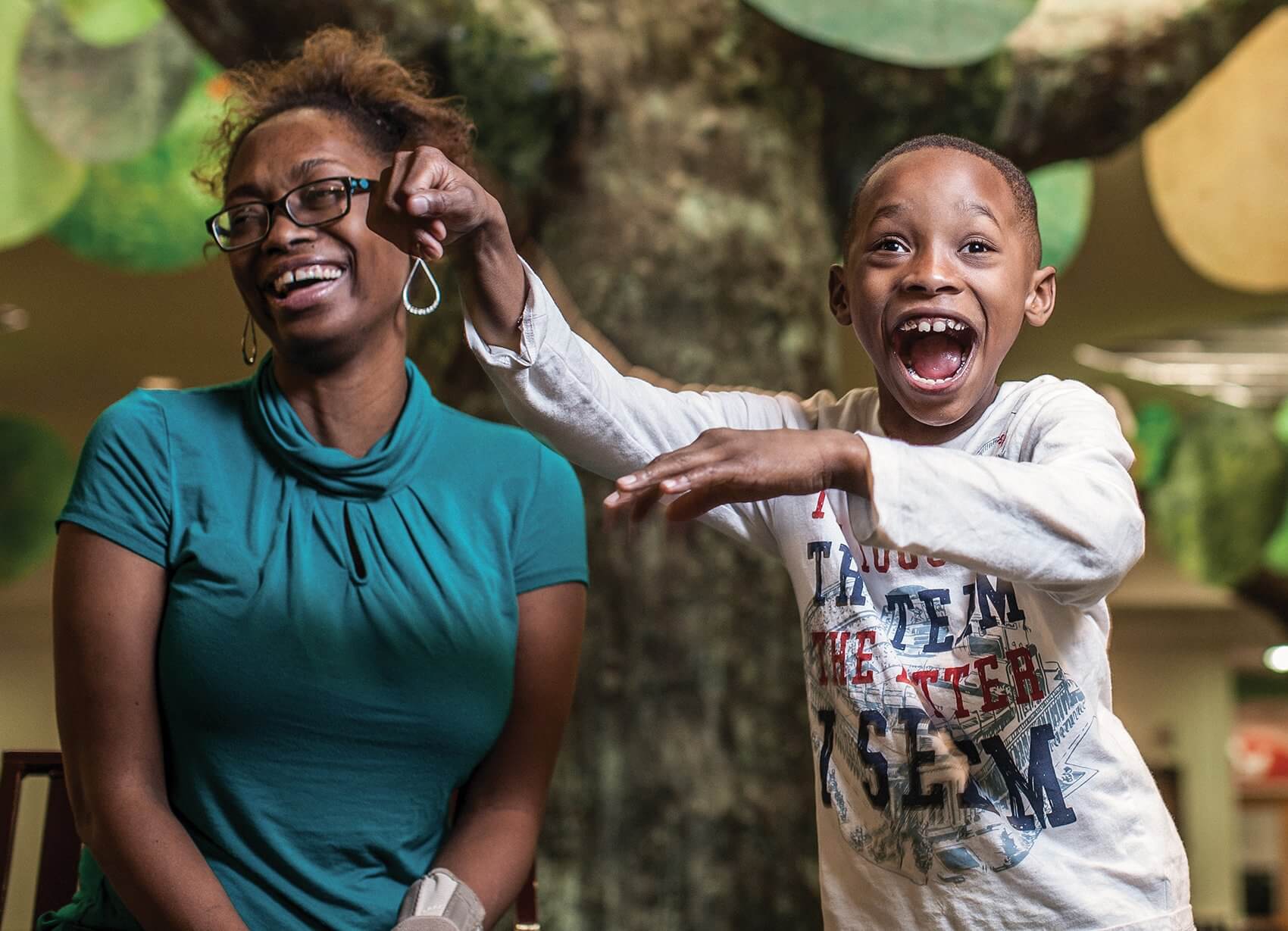 When 8-year-old Darius makes his way down the hallways of Children’s Memorial Hermann Hospital, the forearm crutches that help support his balance do not impede his speed or hinder his determination even in the slightest. He races down the corridors with the same energy and spirited personality as that of the Energizer Bunny.

But Darius is all too familiar with hospitals. He was diagnosed with spastic cerebral palsy as a baby and has been in therapy since he was three months old to manage his spasticity, a condition caused by damage to the part of the brain or spinal cord that regulates voluntary movement and is characterized by stiffness or tightness in the muscles that can affect a person’s movement and gait.

“I knew he had brain damage,” said Sarah Sonia, Darius’ mother. “But you just can’t tell how serious it’s going to be, what’s it’s going to affect, what he’ll be capable of—all of that. It was just taking it day by day.”

By the time Darius was able to walk, therapists arranged for him to utilize a four-wheeled rear walker to help him get around, but it wasn’t until one of Darius’ in-home therapists recommended it that Sonia looked into a highly specialized surgical procedure called selective dorsal rhizotomy. The procedure entails severing and destroying nerve roots in the spinal cord responsible for faulty neuromuscular conditions to help relieve spasticity symptoms.

Although the thought of any type of spinal surgery on her son gave Sonia pause, she researched her options and decided that the possibility of her son being able to take steps without his walker seemed promising.

“You’re going in and you’re messing with something that could potentially leave him paralyzed. As a parent, I had to make a decision. Is this worth doing?” Sonia said. “He was only six, about to turn seven. It was hard. There was a period when I thought we could keep stretching him and he keeps going to therapy, but I just had to consider what was best for him. What would his best option be?”

Only a handful of neurosurgeons in the country are able to perform the SDR procedure, and—fortunately for Darius—one of them was located in Houston at the Texas Medical Center.

On June 15, 2015, UTHealth pediatric neurosurgeon Manish N. Shah, M.D., director of pediatric spasticity and movement disorder surgery at Children’s Memorial Hermann Hospital and the Memorial Hermann Mischer Neuroscience Institute, successfully performed the surgery on then-six-year-old Darius. Within six weeks, Darius, who was unable to ambulate before, put one foot in front of the other, taking his first real steps ever in his lifetime.

The surgery entails making a one- to two-inch incision in the lower back along the spine and cutting three-quarters of the nerve rootlets. It was inspired by Shah’s mentor, T.S. Park, M.D., neurosurgeon-in-chief at St. Louis Children’s Hospital, and what makes this approach unique is the abbreviated procedure time coupled with a higher success rate. The procedure has been shortened from eight hours to just 2.5 hours while permanently eliminating the spasticity and enabling children to walk.

Shah said some neurosurgeons only cut one-third of the nerve rootlets, but the major problem with this approach is that often the spasticity returns over time without the option of a second chance with the surgery.

“I know this to be true because other patients who have had the 30 percent nerve rootlet cut have come to my clinic and lamented that it worked for a year but now it doesn’t work,” Shah said. “It’s a one-shot deal because it’s very hard to identify the nerve rootlets after somebody has cut part of it.”

But Darius’ journey would not have been possible without the multi-institutional, multi-disciplinary “soup to nuts” approach behind his new ability to walk.

“We want to give the kids a chance to develop as much as possible and to optimize their function and their independence,” said co-founder Glendaliz Bosques, M.D., who serves on the medical staff at TIRR Memorial Hermann and Children’s Memorial Hermann Hospital and runs the inpatient rehabilitation unit at Shriners. “But it’s tough when your body just doesn’t react like your brain is telling it to react. We want these kids to get the best option out there and to be able to do the things we envision them doing.”

Although the center is composed of only eight people—including pediatric neurosurgeons, orthopedic surgeons, therapists and clinical administrators—they operate as a well-oiled machine. First, Shah, Bosques, pediatric neurologist Nivedita Thakur, M.D., and the three therapists on their team who help coordinate rehabilitation therapies, evaluate patients together and present their prognosis as a team in a one-hour session with the patients at TIRR Memorial Hermann. Should patients require any sort of surgery—including SDR, deep brain stimulation or baclofen pump—they undergo spasticity management and are then taken to Children’s Memorial Hermann Hospital for the actual procedure.

“That’s why it’s such a profitable hour for the family, because they get six opinions at once. They know exactly what’s going to change in their child’s life when they walk out the door,” Shah said. “They know if they’re going to eventually get surgery or not, or if they need to change their therapy regimen, if they need any equipment, and then how they’re going to get all of those things.”

Once patients have recovered for several days after the surgery, they are transferred to Shriners where they work on their rehabilitation in an intensive in-patient therapy program with specialized therapists three to five hours a day for six weeks.

“When you do the surgery, you’re basically taking all the spasticity away and you unmask all these weaknesses that patients have, so you basically need to reteach them how to move,” Bosques said.

For Darius, learning how to properly ambulate was life changing, but it wasn’t always met with the same positivity and ease as it is now.

“In his eight years, that’s the first time I’ve ever noticed him being depressed,” Sonia said. “Because he had learned to move around with his spasticity, he was used to it. He had known it for seven years. When he had the surgery, because the nerves were clipped, he realized how weak he actually was. But prior to that, he thought he was strong.

“It was hard trying to explain to him, ‘You actually weren’t strong, baby. We did this so that you could get strong,’” she added.

Eventually, the center’s commitment to rehabilitating Darius and his insatiable desire to move came to fruition. Not only was Darius able to walk, but he finally had the opportunity to take up a new hobby: practicing karate.

Since the center’s inception a year and a half ago, doctors have collectively evaluated 250 patients and operated on six patients, ranging from ages three to 10 years old, each resulting in what Shah calls “a remarkable outcome.”

“That’s not because of the surgery, but because of the amazing partnership we have with Dr. Bosques, TIRR and Shriners, as well as the therapists we have on our team,” Shah said. “That’s a very special thing.”

The center’s goal is not only to expand its comprehensive and holistic approach to treating patients, but also to help children who continue to go untreated.

“What’s amazing about children is how resilient they are,” he said. “But what’s truly difficult to watch is a child who has a great immobility from this disease that you know you can fix, but no one’s ever offered them anything before. That’s painful. That’s heartbreaking.”

“We’ll continue to grow and we’re hoping to be able to help more kiddos,” Bosques added. “We’re up for the challenge.”