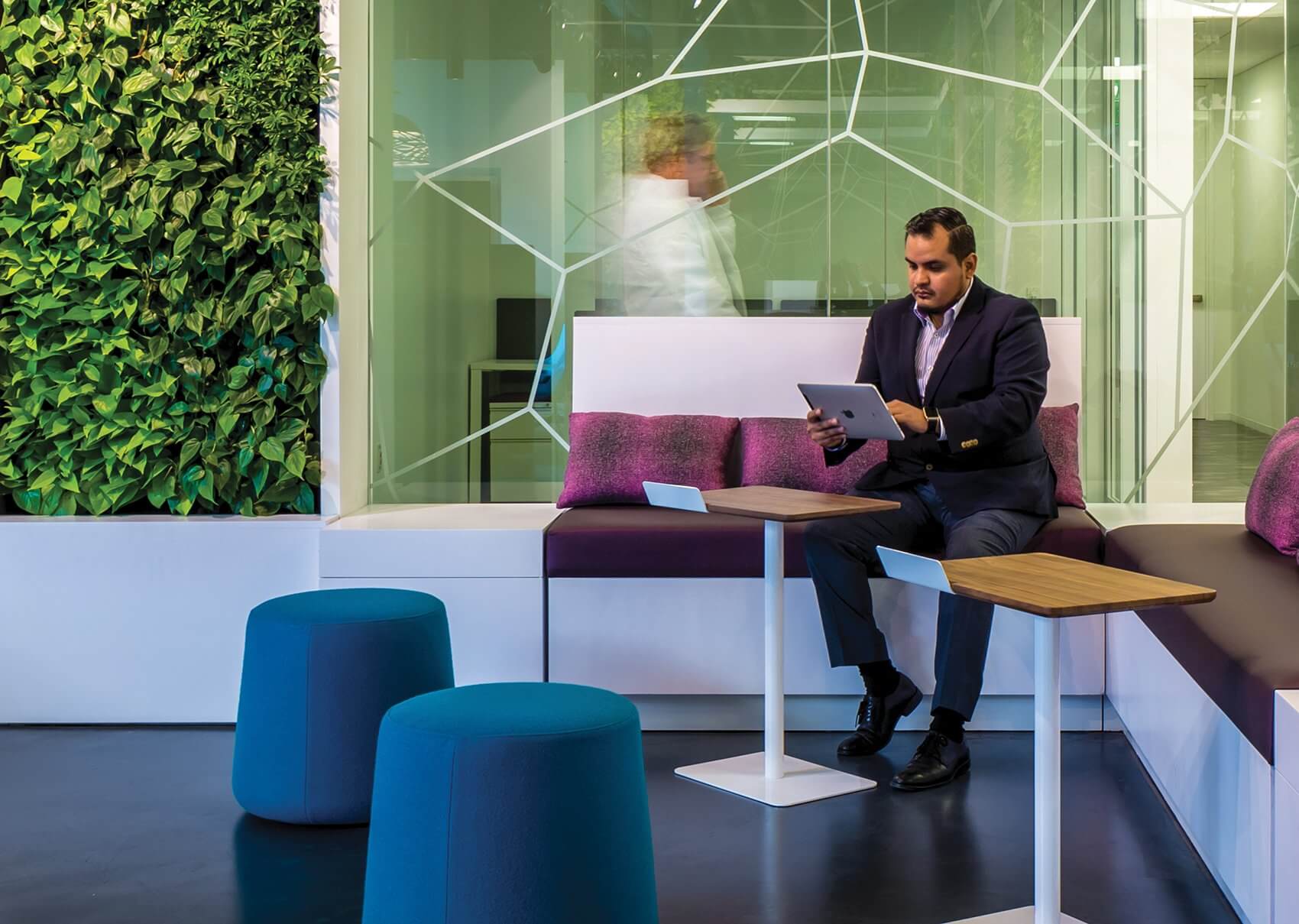 For months, the exterior of JLABS @TMC—the newly unveiled addition to the Johnson & Johnson Innovation (JLABS) network of life science incubators—appeared modest and unassuming. Apart from the “Coming Soon…Early 2016” emblazoned across a blue banner featuring the pharmaceutical giant’s iconic, cursive scrawl, there was little hint of what lay inside. No glimpses of the warm, inviting entryway or the lush, living ferns embedded in the walls. No indication of the network of common areas, laboratory spaces and facilities inside. And certainly no preview of the shimmering, white, fiberglass pod that serves as the central communication portal between the scientist entrepreneurs and Johnson & Johnson locations around the globe. But on March 2, the white curtains that previously shrouded the facility were cast wide open.

“We provide many different types of assets to bring the community together,” said Emmanuelle Schuler, head of JLABS @TMC. “There’s already a strong ecosystem in Houston, but we’re here to strengthen those connections and bring even more players to the table. The starting point lies in bringing discoveries to patients in the form of new technologies and treatments.”

Blending forward-thinking entrepreneurship with the heritage and resources of a 129-year-old company, JLABS strives to be a stepping-stone toward success for its resident companies. Thanks to a flexible model that provides early-stage companies with many of the advantages of being at a big company, while preserving an entrepreneur’s equity and freedom to evolve, resident companies are encouraged to focus on what matters most: the science.

“Essentially, we provide the physical infrastructure and resources for early-stage companies that, typically, only internal research and development teams have at large corporations,” said Melinda Richter, head of Johnson & Johnson Innovation. “In this facility, half of our space is dedicated to common research and business space, while the other half provides dry labs, wet labs and office modules where companies can start with something as small as a five-foot bench. They can literally put it on their credit card, like a gym membership, and grow as they have the resources and the credibility to grow.”

In terms of physical infrastructure, the options available to resident entrepreneurs are expansive: over 70 different types of equipment, from pH meters to centrifuges, spaces for collaboration, common area concept labs, digital fabrication labs and cell-culture facilities, as well as both biology and chemistry labs.

“Even for those companies who only take one lab bench, they have access to exactly the same type of equipment and space,” Schuler said. “There’s really a whole range of equipment—even cold storage that ranges from -20 to -80 degrees—and all of this is at the disposal of our licensees. The different labs are all designed to meet the needs of the very different types of experiments that our companies conduct.

“Very importantly, we also offer access to a medical device prototyping lab,” she continued. “We’re the first JLABS site to incorporate that feature, although once we open our site in Toronto, it will be available there, too. That’s a unique opportunity to capitalize on, especially since Houston is very solid in the area of medical devices.”

If the impressive facilities and equipment, neatly delineated between public and private spaces, aren’t enticing enough, JLABS also employs a full-time operations team for the benefit of its companies, as well as an on-site business services team. Educationally, Johnson & Johnson Innovation draws from a rich network of experts, helping startups avoid common pitfalls and problems that frequently slow down progress.

“Something that I feel quite passionate about is that, occasionally, I’ve seen a bottleneck in that translation from discovery to product,” Schuler said. “At a very early stage, that transition depends on how to effectively tell the story of your science. That story might take the form of a device; it might be a drug; it might be a drug delivery system. How do you communicate the value of that research and discovery to an investor or to a possible partner of choice? It’s not easy, and it requires a different language to communicate that knowledge.”

One example of their robust, year-round programming is the JLABS “Sell Your Science” series, which provides bi-weekly sessions for scientists seeking to convey the full potential of their discoveries—all without spilling their secrets. Ideal for inventors who are steeped in jargon at academic institutions and hospitals, it enables them to learn how to craft a compelling narrative straight from the mouths of their target audience: the investors.

“We also bring potential partners on site here, and companies have the opportunity to meet with them on a one-on-one basis,” Schuler said. “Through that, we create this very high-level, meaningful connection and provide that level of networking to the community. We want people to see that when they come to JLABS, they come to a special place where the expectation is that something is going to happen.”

For Richter, that expectation of greatness is palpable the instant you step foot in the front door, manifested in the aesthetics of the facility. Located mere minutes away from the medical center, a “sparkle of boldness and newness” sets JLABS @TMC apart from the other JLABS sites. “Walking into this facility will make you smile, by virtue of the design itself,” Richter said. “Imagine what can happen at a place like that, where the talent that goes inside is inspired right from the beginning. Without even trying, it creates an environment where people imagine they can do the impossible.”

“The concept for the space itself was ‘Beyond Science,’” added Lisa Pope-Westerman, design director and principal at Gensler, who worked with Johnson & Johnson Innovation to design the facility. “JLABS’ intention is to foster an environment that integrates science and community. Our approach was to create an exciting and dynamic space that would promote interaction between the researchers at JLABS, as well as provide a social gathering space to host many kinds of outside guests.”

Those communal spaces will prove crucial in the coming months. JLABS provides not only an internal community of like-minded individuals who all thrive on the same entrepreneurial spirit, but its resident companies are immersed in a vibrant local ecosystem of therapeutic area experts, venture capitalists and potential partners.

“Forging a partnership with Johnson & Johnson and building JLABS @TMC was the cornerstone of the TMC strategy to build an innovation platform for the entire medical center,” said William F. McKeon, Texas Medical Center executive vice president and chief strategy and operating officer. “This is a tremendous start to a series of industry partnerships that will further advance our capabilities.”

“This is how you build a critical mass,” Schuler said. “This is how you get people from both inside and outside of the Texas Medical Center, as well as inside and outside of Texas, to say that something really important is happening here. We’ve got to give it a serious look and explore what it is that’s so special about Houston. Part of that appeal has stemmed from our great partnership with the Texas Medical Center. We see a lot of synergies here, and that relationship is still growing, every day.”

“We’re one team,” added Richter. “We’re not two organizations but one team that has a common purpose: to make a difference for people around the world. When you share a vision like that, it’s a powerful motivator to cut through the nonsense and focus on what matters. We transcend the issues because we know that this is about something bigger than both of us.”

Between TMCx, TMCx+, JLABS @TMC, and, most recently, the AT&T Foundry for Connected Health—which focuses on digital health innovations that benefit those in and out of the clinical care environment—the TMC Innovation Institute is bursting at the seams, coalescing into a powerful biotechnology cluster that is poised to rival those on the East and West Coasts. For the 12 companies that have already signed licensing agreements with JLABS @TMC—including seven therapeutics, three digital and consumer-facing health companies and two companies in the medical device space—this is just the beginning.

“I think the opportunities here in Houston are tremendous,” Schuler said. “The quality of innovation and the quality of the research that’s being done in the Texas Medical Center is second to none. I can say that because I’ve seen, firsthand, those great innovators for the past 12 years at different academic institutions and hospitals.

“There’s also an emerging vision of the new leaders who have come to lead some of the institutions, who truly believe in making great discoveries that happen within their premises accessible to patients,” she added. “There’s a mindset that’s evolving, and I think we’re capturing that particular moment in time.” 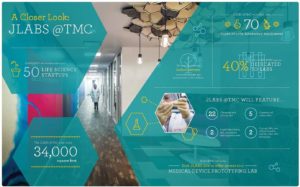