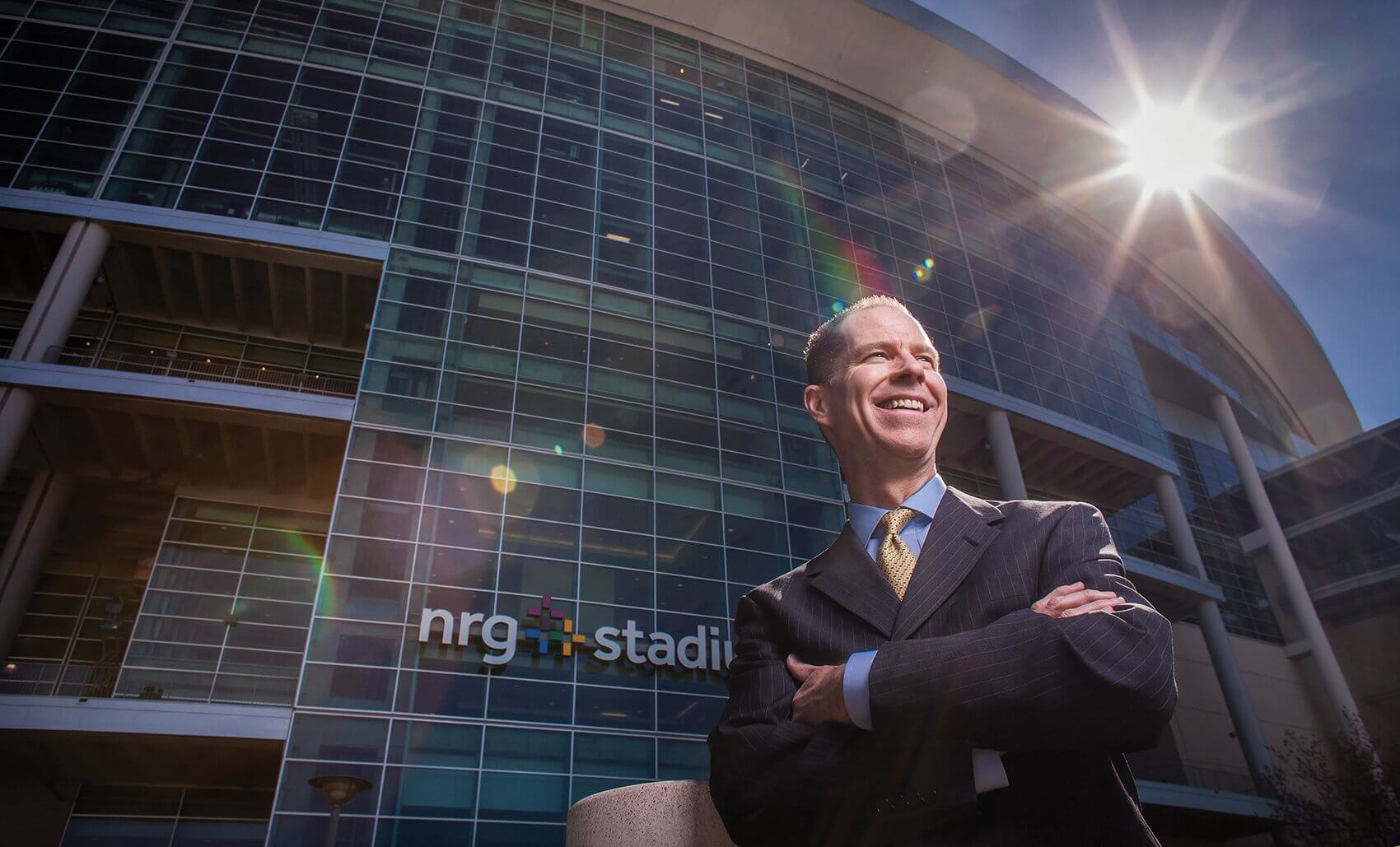 With Houston only a month away from hosting the NCAA Men’s Basketball Final Four, Dan Gavitt, NCAA vice president of men’s basketball championships, spoke with William F. McKeon, executive vice president and chief strategy and operating officer of the Texas Medical Center, about the excitement surrounding the games and what it means for Houston to have been awarded two Final Fours before the first had even taken place.

Q | First and foremost, tell us about where you were born and raised.
A | I was born in Hyannis, Massachusetts—it’s one of the special places of my life, and we have a family home in the Craigville Beach area and go back every summer. But I grew up in East Providence, Rhode Island, and lived there through high school before I went off to college at Dartmouth College in New Hampshire. I then made my way back to Providence, not by any grand design, but that was just the way it worked out after graduation.

Q | How much did your father’s experience in uence what you do today?
A | In retrospect, quite substantially. I grew up essentially on a college campus, because my dad was the athletic director and head basketball coach at Providence College, so my brother and I would go to practices frequently and be around student athletes and around his team. He coached until 1979, which happened to be the first year that they went to the Final Four as well. 1979 was in Salt Lake City, Utah, and it was the infamous championship game between Michigan State and Magic Johnson and Indiana State and Larry Bird. Certainly that is cool for me now being involved with the NCAA basketball championships, knowing that my love of it started then, as my dad went on to other things like starting the Big East Conference, his work with the NCAA basketball committee, his work with the Boston Celtics. We always had this connection professionally and passionately about things that we shared and loved—college sports and basketball being at the top of the list—so quite substantially I think he impacted my career aspirations.

Q | In light of your history with institutions like NIT and the NCAA, can you tell us about your journey and how that shaped the way you think about the NCAA today?
A | Well, in hindsight, I have to consider myself very fortunate to have the opportunities that I’ve had professionally in college basketball and in collegiate athletics. I never knew it would lead to the current opportunity, but along the way it was building to this.

I started as an assistant basketball coach at Providence College and worked for Rick Barnes, who is currently head coach at Tennessee—formerly of Texas and Clemson. He had a significant impact on my professional development, a great mentor, and while I was an assistant coach, I had the opportunity to do many other things besides just coach.

Administratively, I did things dealing with travel arrangements, ticketing and recruiting, and made relationships over my six years coaching with other coaches who have now moved on to become very successful head coaches—guys like Tom Crean and Jay Wright are close friends because we were all assistants together back 20-25 years ago. So I was building this network, without even knowing it, of coaches who I’ve been very close to for a number of years. I then moved on and became an athletic director at a Division II school, at the time Bryant College, which is now Bryant University and a Division I school. As an athletic director, I had the chance to run programs, hire people and evaluate people, develop and mentor folks and learn more about the administrative side of our business. From there, I went on to work at the Big East Conference as the main basketball administrator when it was a 15-team league. I had a chance to help run the basketball championship in Madison Square Garden, to be the main liaison with our basketball coaches, get involved with scheduling and with our television partners—ESPN and CBS at the time—and again, continue to build on that network of athletic directors, conference office personnel, commissioners and television executives, while maintaining my basketball coaching contacts.

All of that now, in my current role with NCAA and NIT, is incredibly valuable, because I have relationships that go back 25 years with coaches and athletic directors and commissioners. I’ve been in each one of their roles, in some cases at a much smaller level than some of the constituents that we deal with at the NCAA, but I know what it is that they go through, as coaches, ADs and conference office administrators. It’s been really beneficial for my work with the NCAA basketball championship. A lot of what we do is work for the membership of the NCAA, so it is working with those constituents to deliver on the things that they need, and I feel like I’ve been there, so I’m more attuned to what it is that we need to deliver for them.

Q | In regards to March Madness, can you explain how the selection process works?
A | I think the magic of March Madness, the thing that makes it so special, is I think it is the most democratic event in the country, if not the world. Because you’ve got 351 Division I NCAA schools, all of which have an opportunity to qualify for the NCAA tournament. While we know that Kentucky and Duke will likely be in the tournament more often than not, even the smallest school in the smallest conference in the country can win their automatic bid and represent their conference in the NCAA tournament. There are 68 teams that comprise the NCAA tournament field, 32 of those teams are what we call automatic qualifiers—they are the winners of their conference championship. Except for the Ivy League, which does not have a conference championship right now, so it’s the winner of the regular season. The other 36 teams that are invited to the NCAA tournament are what we call at-large invitations. And they are the 36 best teams, as determined by the basketball committee, that aren’t automatic qualifiers. So when the ACC champion is determined to be North Carolina because they win the conference championship, and Duke or Syracuse, who was the runner up or finishes third place in the regular season standings, was determined to be one of the 36 best teams not to have won their tournament, then they are one of the 36 at-large teams.

Q | How was Houston selected as a site for the Final Four? What attributes made it so appealing?
A | Houston was selected before I started at the NCAA, actually, back in 2008, I believe. And interestingly, somewhat uncharacteristically, Houston was awarded two Final Fours before hosting the first one, which says an awful lot about the Houston bid, about NRG Park, about the city of Houston, the committee at the time and NCAA staff who awarded Houston the two opportunities to host the Final Four. It’s the fourth largest city in the country, it’s an incredible media market, the entertainment and cultural opportunities that Houston offers, the food and beverage options that Houston offers are all off the charts, and the facility at NRG park and surrounding facilities and the stadium make for a fantastic venue for the Final Four.

Q | What do you personally enjoy most about the March Madness season?
A | Well, I think the thing that we work hardest to provide is an experience for student athletes and their families that they’ll never forget. So, along those lines, we’ve done some things that hopefully make their experience even better than it’s ever been. We’ve moved family members down right behind the bench at the Final Four, so moms, dads, brothers and sisters can be literally right behind the bench and have as good a view as anybody can at the Final Four. We put students in the end zone areas so they’re as close to the action as they can be. We’ve done some things inside the team hotels, like we’ve created student athlete lounges where we’ve put video games, pool tables, Ping-Pong tables and snacks just for the team, so they can go in there and hang out together and enjoy that experience together. We have a student athlete family brunch in advance of the national semi-finals, where student athletes’ families come and get to enjoy that experience together. The thing we take the most pride in is providing an experience that they’ll never forget.

Personally, I think the moment that I enjoy the most—and I really always have, but having the opportunity to work on this special event now firsthand—is that moment just before tipoff on the first sets of the first semi-final game on Saturday of the Final Four, because all four teams that have qualified are all live. They all have their dreams right in front of them to win a national championship, and you’ve got four different corners of the stadium that have the colors of the four teams, and the noise is deafening and the feeling is electric. And that’s the most exciting time for me, just before that first tipoff on Saturday.

Q | Any closing thoughts?
A | Well, we’re just thrilled to be coming to Houston. You know, we plan years in advance for the Final Four, and very specifically, inside the calendar year leading up to the Final Four, we have monthly meetings in the host city. So we’ve been coming to Houston since June on a monthly basis. We’ll make our final visit next week, and that’ll be our last planning meeting with the Local Organizing Committee in Houston and the local authorities. It’s hard to believe that we’re as close as we are now, having started this process back in June. But the excitement couldn’t be higher on our end, so we’re looking forward to it.