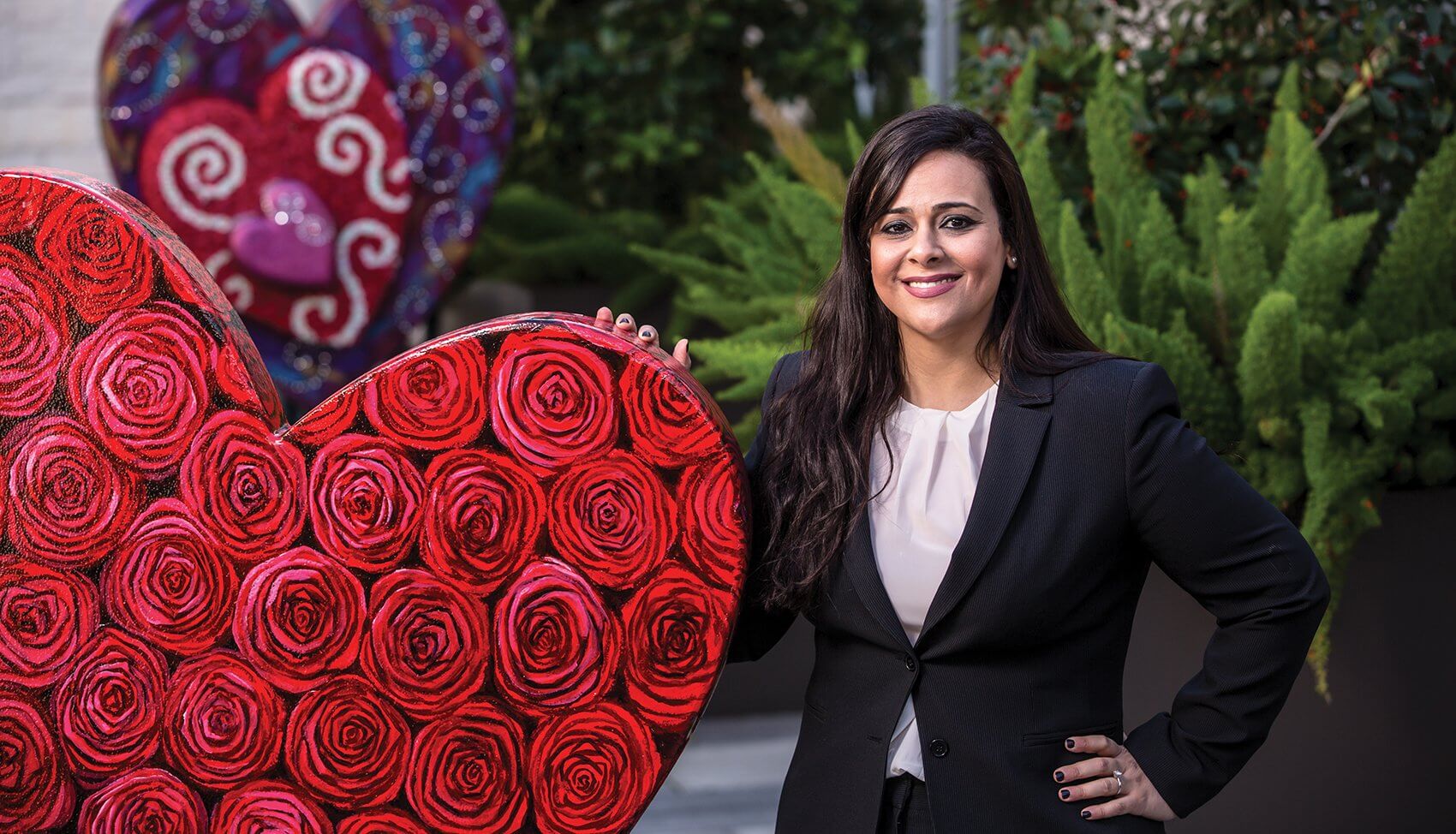 In honor of American Heart Month, Yara El-Sayed, executive director of the American Heart Association, Houston affiliate, sat down with Texas Medical Center Executive Vice President and Chief Strategy and Operating Officer William F. McKeon to discuss the importance of heart health and how the AHA works to promote community training and awareness.

Q | Let’s go back to the early days. Where were you born and raised?
A | I was born in Cairo, Egypt. I lived there until I was four, when my parents came to the United States. I was raised in the U.S. in Columbia, Missouri. It’s great to have to the best of both cultures, and I’m grateful to my parents.

As a student, I appreciated getting hands-on experience through the school’s TV affiliate. I toyed with broadcast news a bit, but the quick turnaround wasn’t for me. My dad thought I would be the next Diane Sawyer. It was a great experience, though, and I can honestly say I use my degree in journalism every day.

Q | Take us through the time that you were very active with the American Heart Association (AHA) early on and then the Boys and Girls Club of America. What were some of the decisions or opportunities that shaped you to eventually take on this role?
A | It’s interesting where life can take you. I feel strongly that the right people come into your life at the right time. When I joined AHA early on in 2003, I can’t say I had a true connection to the mission. It was really a great opportunity. What surprised me is that soon after I started working at AHA, I was deeply touched by the work we were doing with stroke victims. Seeing what stroke does to the brain and how debilitating it can be is startling.

Being able to return to an organization that meant so much to me early on in my career is really wonderful. The impact of the work we do at AHA continues to shape me personally and professionally.

Q | When you think of the American Heart Association, what is its primary goal and mission?
A | The AHA is a vast and complex national organization. In a nutshell and at the core, our primary focus is to help people live healthier lives. We do this in a number of ways: education through programs like Check. Change. Control. (our hypertension management program), raising awareness through cause campaigns like Go Red for Women and fighting for stronger public health policies.

The AHA is both a funding nonprofit and also one that provides a service or educates the community. We invest in communities. As an example, we fund critical research. In fact, we have around $12 million in active research grants being funded right here in the Texas Medical Center. And anecdotally, the AHA funds more research than any U.S. organization except the federal government. Definitely something we are proud of.

Q | February is a very special month. Can you tell us why?
A | As we enter February, the AHA shines a spotlight on heart disease during American Heart Month. It’s so great to see so many partners—especially our hospital institutions in the Texas Medical Center—rally around this month to raise awareness.

During February, we invite people across the country to wear red on National Wear Red Day, to raise awareness that heart disease is not just a man’s disease. Each year, one in three women die of heart disease and stroke, and 80 percent of cardiac events can be prevented. Through our Go Red for Women campaign, and thanks to our major sponsors like Macy’s and the Texas Medical Center, we are having a tremendous impact, but there is still work to be done.

Q | Tell us more about the Go Red for Women campaign.
A | The Go Red for Women campaign started just over 12 years ago. Heart disease—historically, traditionally and medically—has always been a man’s disease. That’s how it’s been viewed in the medical and clinical world, as well as the mainstream world. When you think of the Hollywood heart attack, you think of a man clutching his heart and falling down the stairs. The reality is it’s the number one killer in women. The other piece of that is heart issues—whether that be heart disease, heart attack or stroke—have symptoms that manifest themselves very differently in women than they do in men. The treatment of women with heart disease is and can be different than the treatment of men.

Q | What other programs are you rolling out in the community?
A | A huge focus for AHA right now is hypertension management through our program called Check. Change. Control. 78 million people in the United States have high blood pressure. It’s the silent killer and there are no symptoms, but deadly consequences. A few years ago, the American Heart Association developed a scientific study to see if a community-wide program could be effective in improving results. The answer is yes, and we now have put all of our efforts into helping people know how to check their blood pressure, how to change it and ultimately how to control it. We also have a hypertension task force led by a physician, who is the president of our board, and we engage with large employers because numbers really do matter. We want to impact as many Houstonians as possible.

We have been focused, as well, on CPR programs. In 2013, the State of Texas passed a law that mandated that all graduating seniors from high school complete a 30-minute hands-only CPR training course. We played a vital role in securing that legislation because we believe in teaching the next generation of lifesavers. In fact, we have a CPR in Schools Training Kit now that is portable and designed to train 10 to 20 students at once.

While there is a cost associated with these kits, we’ve been able to partner with companies to sponsor school districts to train these kids. It’s really a great initiative. As of right now, we have 27 states across the U.S. that now have CPR in Schools requirement. We’re proud that Texas is one of those.

Q | Has this been implemented in the HISD system?
A | Yes, we are working with HISD and many other school districts around Houston and the surrounding areas. It’s exciting to know that each year we are adding over one million lifesavers to the population. We are proud to be the leader in CPR training across the country. It’s something we are very passionate about especially because 70 percent of cardiac arrests occur at home. We want the entire family to know what to do in an emergency.

Truly, CPR training saves lives. We actually provided CPR training for a company a few years ago, and just two weeks after the training an employee had a cardiac arrest in the parking garage. His life was saved because his coworkers knew what to do. I think that is an incredibly impactful story, and a reminder that any one of us could be called to act in an emergency.

Q | A year from now, where do you hope to see the AHA?
A | Houston is such an amazing city with the largest world class medical center and philanthropic corporations and individuals. I’m so excited that in my role, I get to play a small part in working to make a better and healthier Houston.

I see us engaging more community volunteers, who are the lifeline to our organization. People like Dr. Bobby Robbins and Denise Castillo-Rhodes, our 2016 Go Red for Women chair, are so important to the future of our organization. Without them and countless others, we could not do what we need to do. We have a strong board of directors, led by current board chair Jason Few, that live the mission of the AHA every day. I am so thankful to work with each of them