The Beat of the Medical Center

The Beat of the Medical Center 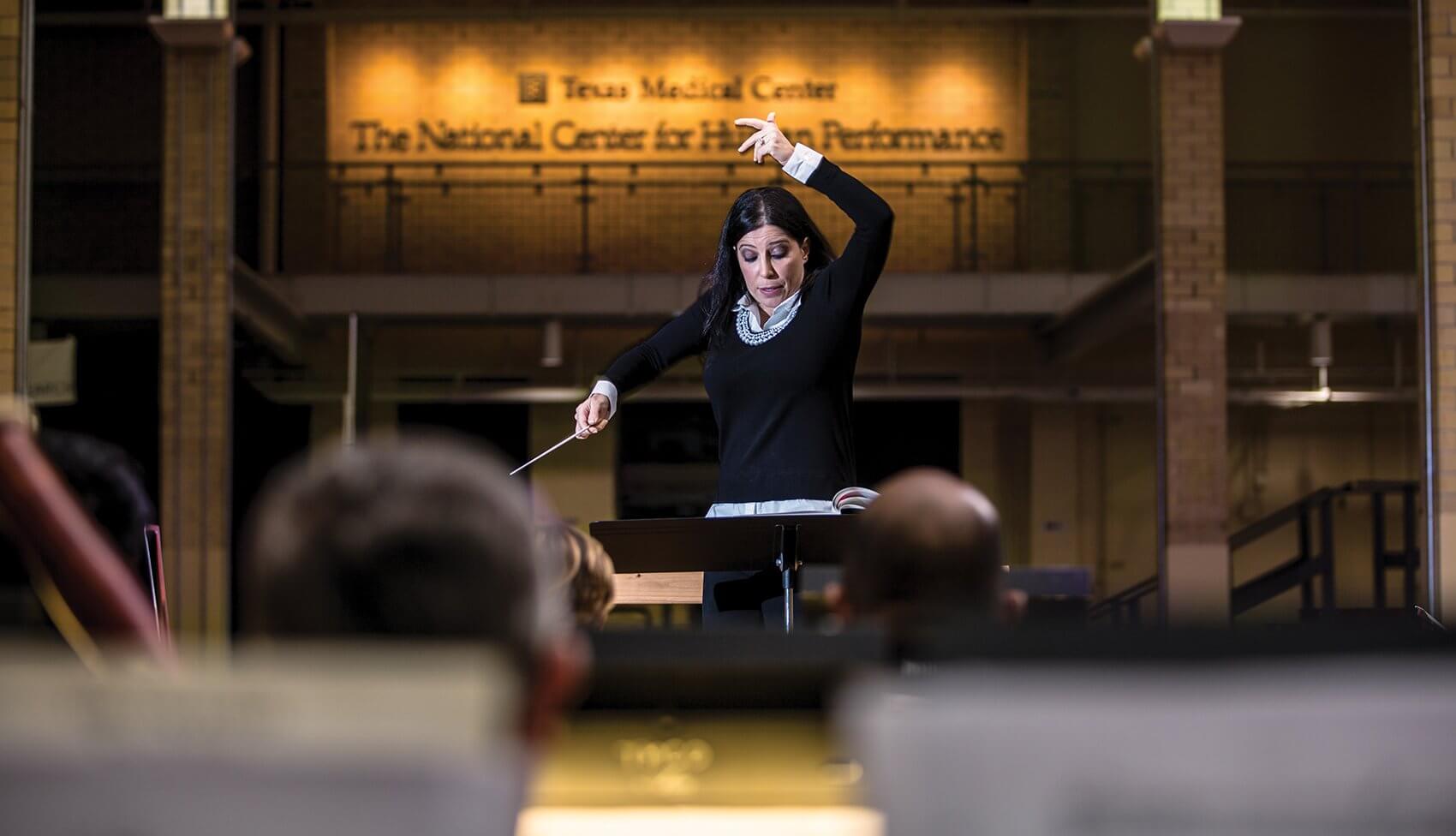 In 2000, Libi Lebel left New York and a position as principal conductor of Princeton University’s Sinfonia Orchestra for Houston to start an orchestra in the world’s largest medical center. Lebel received a bachelor’s and master’s degree from The Juilliard School of Music and The Westminster Choir College.

Inspired by a performance she had seen by the Doctor’s Orchestra of Philadelphia, Lebel wanted to give Houston’s health care professionals a creative outlet through music.

With the help of then dean of The University of Texas Health Science Center at Houston McGovern Medical School, L. Maximillian Buja, M.D., Lebel was able to obtain space to hold auditions.

“The dean helped me send out an email to the medical center about auditions, and other than that, I put fliers up on every bulletin board I could find,” Lebel said.

Lebel was pleasantly surprised when she had more people show up for auditions than she could take at the time, and they formed an incredibly talented group.

“I had given a research seminar at UTHealth Science Center and noticed a flier hanging on a bulletin board near the elevator for the orchestra auditions,” said Lynn Zechiedrich, Ph.D., principal flute and professor at Baylor College of Medicine. “I was so excited. I called Libi the second I was back at my office and told her I played flute and would like to audition. There were no flute positions available, so I auditioned to play piccolo. I played piccolo and co-principal flute for one year and have been the principal flute player ever since.”

In the beginning, the orchestra relied on support from all of the Texas Medical Center members. The orchestra was able to borrow concert music from the Shepherd School of Music at Rice University and the Moores School of Music at the University of Houston. They also utilized practice space at the McGovern Medical School, the Texas Heart Institute and the Michael E. DeBakey Veterans Affairs Medical Center Houston.

“This space has worked so well for us,” Lebel said. “It is a great location for most of our members because it is in the medical center. We just love it.”

Soon after its formation, the orchestra expanded to include not only doctors, but also professors, students, residents, medical examiners and more. The orchestra also now accepts members who work outside the medical center.

All of the members have hectic work and family schedules, but they look forward to the three hours a week they spend practicing as a way to escape their busy lives.

“As intense as our days might be, being pulled from patient to patient in critical condition, as tired as you are, when you come here you get revamped with all of the energy,” said Michael Siropaides, M.D., a viola player.

The TMC Orchestra performs at least three times a year as a group in addition to members spending time performing alone at many of the hospitals around the medical center.

“The TMCO is comprised of individuals from all walks of life, but many are based in the medical field or in allied health areas. Those who are not involved in the medical field are, nonetheless, generally professionals of some sort or another,” Wolf said. “This makes for some mutually shared experiences…long days at work, intense work life, exhausted by the time Wednesday practice rolls around, but committed to this artistic endeavor.”

The orchestra has performed throughout the medical center and the city of Houston over the past 16 years. In that time, the musicians have formed deep bonds and provided support for one another even beyond the musical. Two years ago, the group, led by Lebel, performed at Carnegie Hall in New York City. After the performance, Lebel extended her trip to celebrate her birthday. Upon returning, she was plagued with illness and exhaustion for two years.

“I didn’t know what to do,” Lebel said. “I had been struggling for months and nearly passed out on my podium at rehearsal. At that point, I asked the orchestra for help. After 15 years, we are like a family and they are all health professionals.”

After a long journey, Lebel was diagnosed with Lyme disease. Even with treatment, she still struggles to get through her days and it is more difficult for her to get to rehearsal.

“Having Lyme disease, I felt a bit fatigued today,” Lebel said. “The minute I heard the first three notes, I thought, ‘Oh my gosh they are sounding so good.’ I was ignited with this energy and I forgot that I was sick and in bed for the last three days.”

Rajeev Raghavan, M.D.
Cello
Rajeev became involved with the orchestra when he was a medical student at Baylor in 2005. Although it was difficult to attend rehearsals due to clinical rotations or exams, he realized practicing and performing with the Texas Medical Center Orchestra was an excellent and healthy stress reliever. Rajeev has a wife and two daughters.

Lynn Zechiedrich, Ph.D.
Principal Flute
Lynn works as a professor at Baylor College of Medicine in its department of molecular virology and microbiology, biochemistry and molecular biology and in the department of pharmacology. She also serves as the Kyle and Josephine Morrow Chair. Zechiedrich has been part of the orchestra since its inception.

Dwayne Wolf, M.D.
Double Bass
Dwayne is the deputy chief medical examiner for Harris County. Outside of the orchestra, he oversees medicolegal death investigation in Harris County, supervises a staff of 14 forensic pathologists, performs autopsies and testifies in criminal and civil cases.

Michael Siropaides, M.D.
Viola
Michael is a cardiologist in Houston and completed his fellowship at CHI St. Luke’s Hospital. He has been a member of the Texas Medical Center Orchestra for the past 14 years. He joined the orchestra because of his passion for music and medicine.