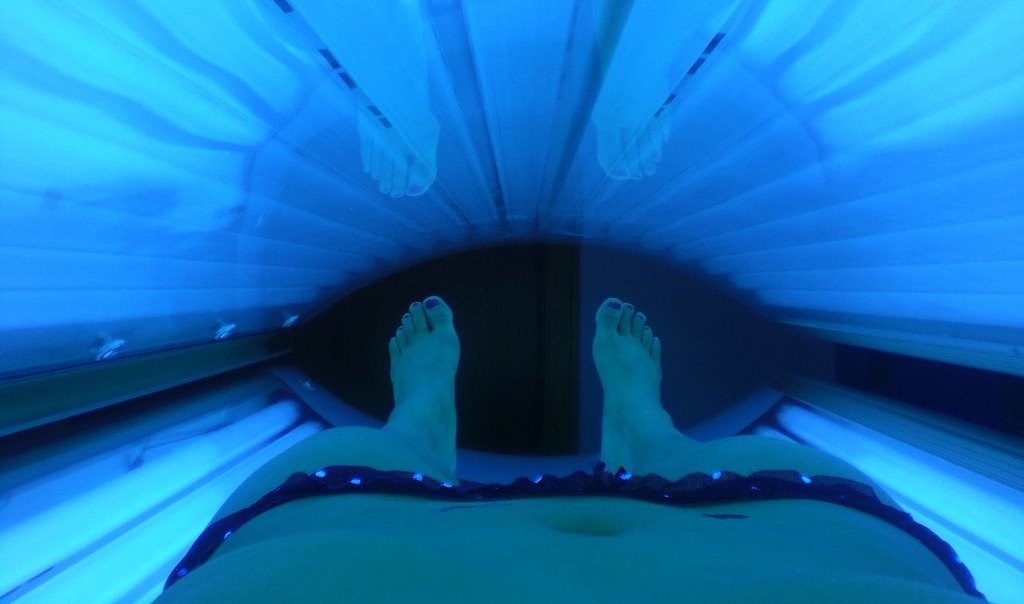 The Food and Drug Administration proposed in December 2015 a new two-pronged safety approach to limit the population’s use of indoor tanning devices in an effort to protect people from ultraviolet radiation exposure and its associated risks of skin damage and skin cancer, including melanoma.

Melanoma is a cancerous growth that develops from pigment-producing cells, called melanocytes, in the skin. If detected early, melanoma can typically be treated by surgically removing a rim of normal tissue around and under the biopsy site. More advanced cases of melanoma, especially once it reaches to the lymph nodes, require more aggressive treatment approaches, including extensive surgeries, radiation therapy and chemotherapy.

“What we’ve learned in the epidemiological world and even now in the laboratory is that there’s really clear and compelling evidence that artificial ultraviolet exposure from indoor tanning is really an independent risk factor for melanoma,” said Jeffrey Gershenwald, M.D., professor of surgical oncology at The University of Texas MD Anderson Cancer Center.

According to the American Academy of Dermatology, people who expose themselves to UV radiation from indoor tanning are 59 percent more at-risk for developing melanoma compared to those who don’t use those devices.

A study conducted by the American Cancer Society showed that approximately 144,860 new cases of melanoma (68,480 noninvasive and 76,380 invasive) will be diagnosed in the U.S. in 2016, killing an estimated 10,130 people, but Gershenwald and the FDA hope to improve those numbers by promoting skin cancer prevention practices and raising awareness on the dangers of UV radiation from indoor tanning and direct sunlight.

Under the proposal’s first measure, the ban would restrict people under 18 from using sunlamp products, such as indoor tanning beds and booths, and would require those facilities to inform adult users of the dangers and health risks of UV radiation exposure. Should users decide to proceed with their tanning decisions, they would need to sign a waiver acknowledging the health risks related to indoor tanning use prior to their first session and every six months afterwards.

The second measure included in the FDA’s proposal is designed to hold manufacturers and tanning facilities to a higher standard of safety by implementing changes to warning statements, increased protective eyewear regulations and requiring emergency shut-off switches.

Currently, the FDA only requires salons to carry visible, black-box warnings on indoor tanning beds and booths that say minors should not use the devices. The agency’s new proposal would institute more stringent regulations on a national scale.

“We have in front of us a potentially preventable cancer,” Gershenwald said. “Some melanomas and some skin cancers can actually be prevented if we reduce UV exposure. One of the ways to do that is to prohibit the use of indoor tanning where we know that can create danger.”

As co-leader of MD Anderson’s Melanoma Moon Shot program, Gershenwald and his team worked with governmental relations experts and other organizations across Texas to educate state legislators about the health dangers of tanning bed use. Their efforts came to fruition on Sept. 1, 2013, when Texas made it illegal for people under 18 to use indoor tanning devices, joining the 12 other states — including California, Delaware, Hawaii, Illinois, Louisiana and New Hampshire — to pass such a law.

“With Texas introducing this law to the national landscape, others have told me that Texas had a lot of impact elsewhere. I think a lot of individuals have thought, if Texas can do this, anybody can,” Gershenwald said, adding that Mississippi and Oklahoma are considering following suit.

Although Gershenwald said he is excited to raise awareness of the increased risk of melanoma due to indoor tanning in the state, he explained that this is a global issue that carries well beyond the walls of Texas and the country. Several European countries — including Austria, Belgium, France, Germany, Spain and the United Kingdom — have in effect a similar law that also prohibits minors under 18 from using indoor tanning, but Brazil and Australia have gone the extra mile and banned indoor tanning altogether.

A Cautionary Tale
For Alabama native Sarah Hughes, indoor tanning was a way a life dictated by peer pressure and unhealthy, unrealistic ideals of beauty.

“I was basically trying to keep up with everybody else and just be a high school girl,” Hughes said. “[I] wanted to be tan. The tanner you are, the skinnier you look, and everybody else was doing it.”

Hughes, who participated in pageants in her hometown of Dothan, Alabama, felt the mounting pressure to conform to society’s definition of beauty and would book 20-minute sessions at the indoor tanning salon between four and five times a week. She first started indoor tanning when she was 16 years old and continued the habit for nine years.

By the time Hughes was 25, a masseuse noticed a peculiar mark on Hughes’ calf during a sports therapy session and Hughes found another black spot on her left thigh a few days later. Because she previously had a few sun spots removed, she said she wasn’t alarmed by the new marks.

“I’d have them removed and then pop back in the tanning bed and do whatever I was doing before,” she said. “In the back of my mind, I’m thinking, ‘OK, whatever. Just cut it off.’ No big deal.”

After a visit to the dermatologist on June 3, 2010, however, doctors notified Hughes that the “no big deal” was actually a very big deal: Hughes’ positron emission tomography (PET) scans showed that the melanoma had reached her lymph nodes, and it would no longer be a simple local excision of the moles. Instead, doctors removed 11 melanomas, including the one on her hip, which had grown a tumor into her muscle and bled into the lymph nodes on her left leg.

“I was just completely mangled after that,” Hughes said. “They removed all the way down to my muscle at my hips and I had a bunch [of melanoma] on my back and my butt. It was places where swimsuits would cover and that’s what I didn’t understand.”

Because tests showed that her sentinel lymph nodes were also infected, Hughes decided to seek treatment at MD Anderson, where doctors conducted more margin clearings and removed 3 additional melanomas and lymph nodes in her left groin area. But Hughes was not out of the woods yet: The extent of her condition required her to undergo chemotherapy treatment.

“[Doctors] told me, ‘Look, you can not have the surgery and you can not do the chemo[therapy], but you’re also not going to live to see 27. You can hang it up,’” Hughes said.

One year of chemotherapy and three interferon shots per week later, Hughes finally completed her treatment on Dec. 29, 2011.

“Sometimes it takes something very dramatic — whether it be losing a very close person to you or something like cancer hitting you — to make you sit back, stop, think and really realize what the big picture is,” Hughes said. “The thing that I was focused on in life at that time was not the big picture. It was the whole self image, keeping up with the Joneses thing. I had to have a new car. I had to have a Louis Vuitton purse. I had to have this. I had to have that. I had to go on all these trips. I mean what do I have to show for any of that? Nothing, blurred memories and pictures. I’m very thankful that it all happened because it made me who I am today and it made me wake up and realize that I was focused on a lot of the wrong things.”

Considering the nine years Hughes spent indoor tanning and the grueling treatment process she experienced, she said the FDA should not just ban minors from using indoor tanning devices. The risk of melanoma for anyone is too high and too expensive, she said.

“I honestly think that tanning beds should be banned altogether. If you have enough money to pay to damage yourself, then you need to go on and be prepared to have enough money to take care of yourself when you get cancer,” said Hughes, who accumulated $600,000 in medical bills because of her melanoma treatment, and had to pay $12,000 out of pocket in 2015.

The FDA’s proposed safety measures for indoor tanning are open for public comment until March 21. For more information about the proposal and how to comment, visit the FDA’s website here.