Throughout her leukemia treatment, one 13-year-old Texas Children’s Hospital patient finds comfort and motivation in her passion for ballet 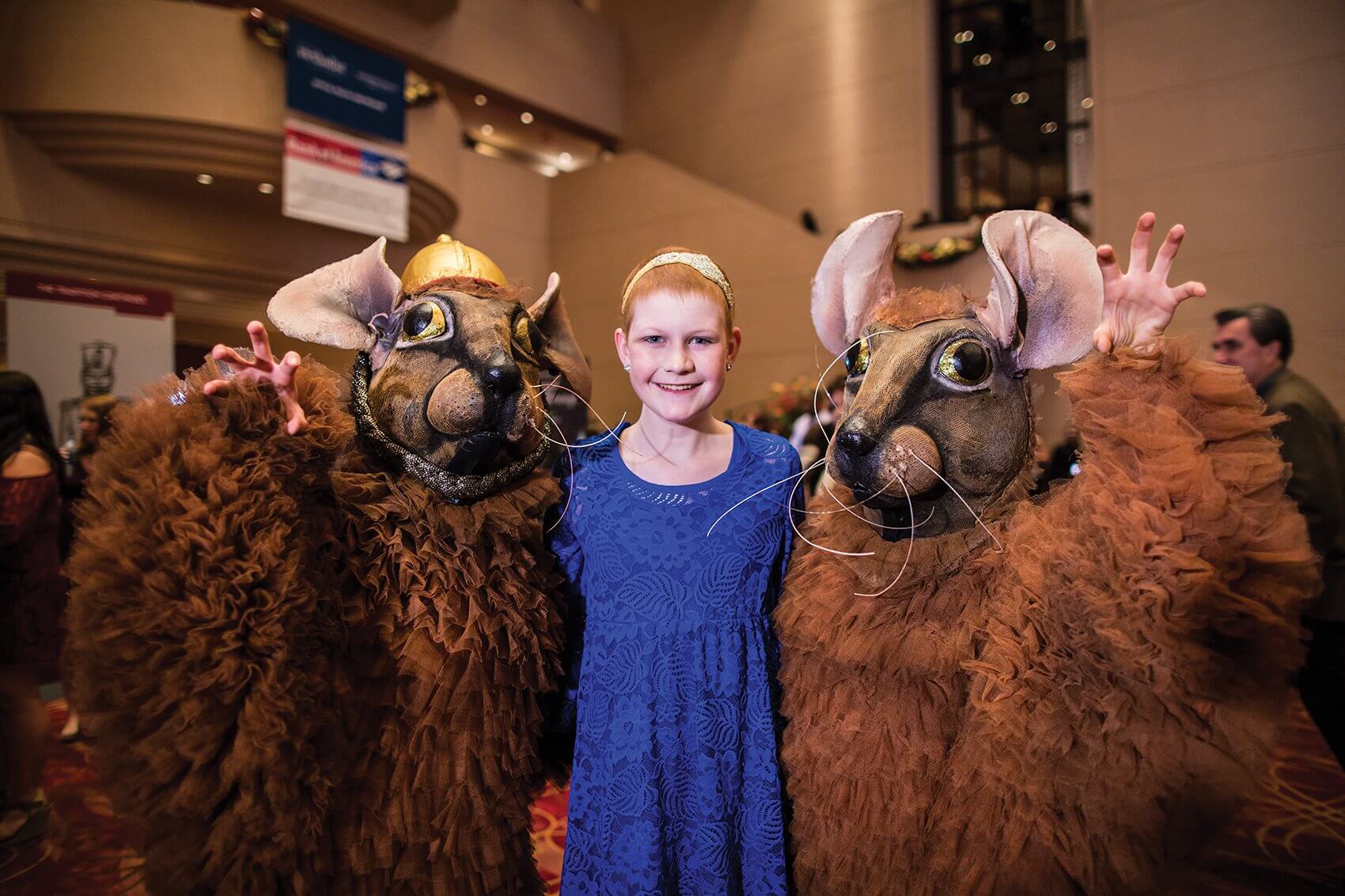 After a decade of practice, thirteen-year-old Peyton of Sugar Land, Texas, had just achieved one of her many dreams: to perform en pointe in the Nutcracker ballet, just as she had seen ballerinas do since she first saw the performance at age three.

“I love dance because I love performing on stage…the costumes and lights. But mostly I love making people happy through ballet,” Peyton said.

A month after her performance, the once lively and bubbly Peyton had become exhausted, socially withdrawn, lost her energy for ballet (her favorite pastime) and had lost a significant amount of weight. Her mother knew something was very wrong.

“I was watching Peyton during one of her ballet classes and she stood at the back of the room the entire time and could barely lift her leg during a combination,” said Carrie Richardson, Peyton’s mother. “I had never seen her act like that before.”

The following day, Richardson made an appointment for Peyton with the pediatrician she had been seeing since birth. Before even running any tests, Michael Bishop, M.D., a pediatrician at Texas Children’s Pediatrics Grand Parkway, suspected that Peyton had leukemia because her organs were so enlarged.

“Dr. Bishop sent us to Texas Children’s Hospital to begin treatment for Peyton,” Richardson said. “When we got there, I was asked what Peyton was being treated for and I said ‘leukemia.’ I never in my life thought I would be saying that about my daughter.”

After receiving her diagnosis in January, Peyton’s life changed completely. She was no longer able to attend Logos Preparatory Academy because her immune system could not handle being around so many people, nor could she practice ballet the way she once did.

“I had just started going to a college preparatory school where you only go three days a week,” said Peyton. “Looking back, I think God was preparing me and my mom for all of the time we were about to be spending together.”

By March, Peyton developed a serious complication of her leukemia treatment. After receiving a small dose of methotrexate during a routine spinal tap, Peyton was unable to move her hand. By the next day, she had suffered a series of seizures and was admitted to the Pediatric Intensive Care Unit at Texas Children’s Hospital.

“She lost her ability to speak normally and the ability to move part of her body,” said Zoann Dreyer, M.D., Peyton’s doctor at Texas Children’s Cancer Center. “Generally, patients fully recover, but it is very hard for a parent to watch. Even for me, having seen it before, it is very scary to watch someone go through it.”

The methotrexate reaction left Peyton with limited mobility, meaning she could not dance the way she had before. To remedy this, her doctors recommended she begin physical therapy. David Macha, a lifelong family friend and physical therapist at Memorial Hermann Sports Medicine and Rehabilitation Center in Sugar Land, fit the bill.

“If you know Peyton, you know she is very happy and outgoing. After she had her seizures, she wasn’t that Peyton anymore,” Macha said. “Once we started therapy, she started getting the flexibility back in her hips and getting her strength back. She is motivated, driven and wants to keep her dream of being a ballerina. Cancer isn’t going to get in her way.”

Other than losing the ability to dance, Peyton’s greatest fear when she learned she had cancer was losing her beautiful red hair that she loved so much. By August, her fear had become a reality.

Peyton had been wearing hats when she went out in public because she did not want people to see her without hair. During a checkup, Dreyer asked Peyton if she had been growing any hair back.

“She took her cap off and she just had a whole head of fine red hair coming in and she looked so beautiful,” said Dreyer.

That evening, Peyton asked her mom to take her shopping so she could do some baking. When she came into the living room, she was wearing a headband instead of her normal hat.

“We were at H-E-B and a woman wearing a hat came right up to Peyton, took off her hat and said, ‘I didn’t know I would meet my twin tonight,’” Richardson said. “The woman told Peyton she looked so beautiful and had given her the courage to take her own hat off.”

Along with the confidence of her new hair came a turn in Peyton’s treatment. After receiving treatment for a year, Peyton recently began maintenance therapy. For her, maintenance therapy will last roughly two years and enable her to return to school and get back into her regular routine.

“I’ve said throughout my treatment that ballet is harder than cancer,” Peyton said. “In ballet, you have a ton of things going through your head that you can’t mess up. Cancer is still hard, but if you have a positive attitude, it makes it a lot easier.”

Peyton was recently given the opportunity to share her love for dance, and her positive outlook on life, as the smiling face of the Northwestern Mutual float at the 2016 Rose Parade in Pasadena, California. She was selected from a pool of childhood cancer patients from around the country who submitted videos showcasing their greatest adventures, with the winner’s story ultimately inspiring the company’s float design.

“We had this vision of helping people move forward with their dreams. It’s what we are all about at Northwestern Mutual,” said Jeff Reeter, managing partner at Northwestern Mutual. “We had this idea to tie our involvement with the Rose Bowl game with our passion to cure pediatric cancer.” The idea to reach out to pediatric cancer patients came from the company’s Childhood Cancer Program. Dreyer was among the physicians contacted to see if she had any patients who might like to participate.

“When I got the email, I tried to think of fun, outgoing kids and Peyton immediately came to mind because she is so outgoing, artistic and clever,” Dreyer said. “A couple of days later Peyton and her mother came back with an amazing video. It was stunning.”

When thinking of what her greatest adventure would be, Peyton admits it wasn’t as easy as she expected.

“You don’t really think every day about what you would do if you could do absolutely anything,” Peyton said. “When I thought of my idea, I asked my mom if it was too crazy.

“My greatest adventure is to travel the world and visit all of the greatest ballet companies and get to meet their principal dancers, dance with them and see a show,” Peyton said. “I have wanted to do this forever.”

The float was named “Dancing into Adventure” in honor of Peyton’s greatest adventure. Tchaikovsky’s Swan Lake—one of her personal favorites—served as the inspiration for the float. The Richardson family traveled to California for the 2016 Rose Parade and Rose Bowl game. While there, Peyton met the cast of the Today Show, decorated her float and rode in the parade wearing a custom ballerina costume made by the Houston Ballet.

“We chose Peyton from right here at Texas Children’s because she is such a phenomenal young lady. She has a vision and this resilient spirit that we were just taken with,” Reeter said. “Peyton’s vision of dancing through life, even with everything that she has gone through, inspired all of us to dance more and enjoy life.”

Peyton was joined at the parade by another family from the Texas Medical Center, Monica and Marilyn Burnom. The Burnoms were on the Donate Life float. Monica, of Houston, Texas, was diagnosed with lupus and received treatment at Houston Methodist Hospital.

“I had been waiting for a kidney for five years and I got a call in January 2014 saying they had found a match. I felt very blessed,” Monica said. “At the last minute, they realized there was a tumor on that kidney and it could not be used. In March of that year, when they called me the second time, the kidney was a match.”

Her mother, Marilyn, had been working for the Texas Department of Public Safety (DPS) and did not realize the importance of the Donate Life Registry until her daughter was on the list. To share her daughter’s story and inform others, Marilyn urged Monica to submit her story to the DPS website. After the submission, the two were selected as delegates for the Donate Life America float at the 2016 Rose Parade.