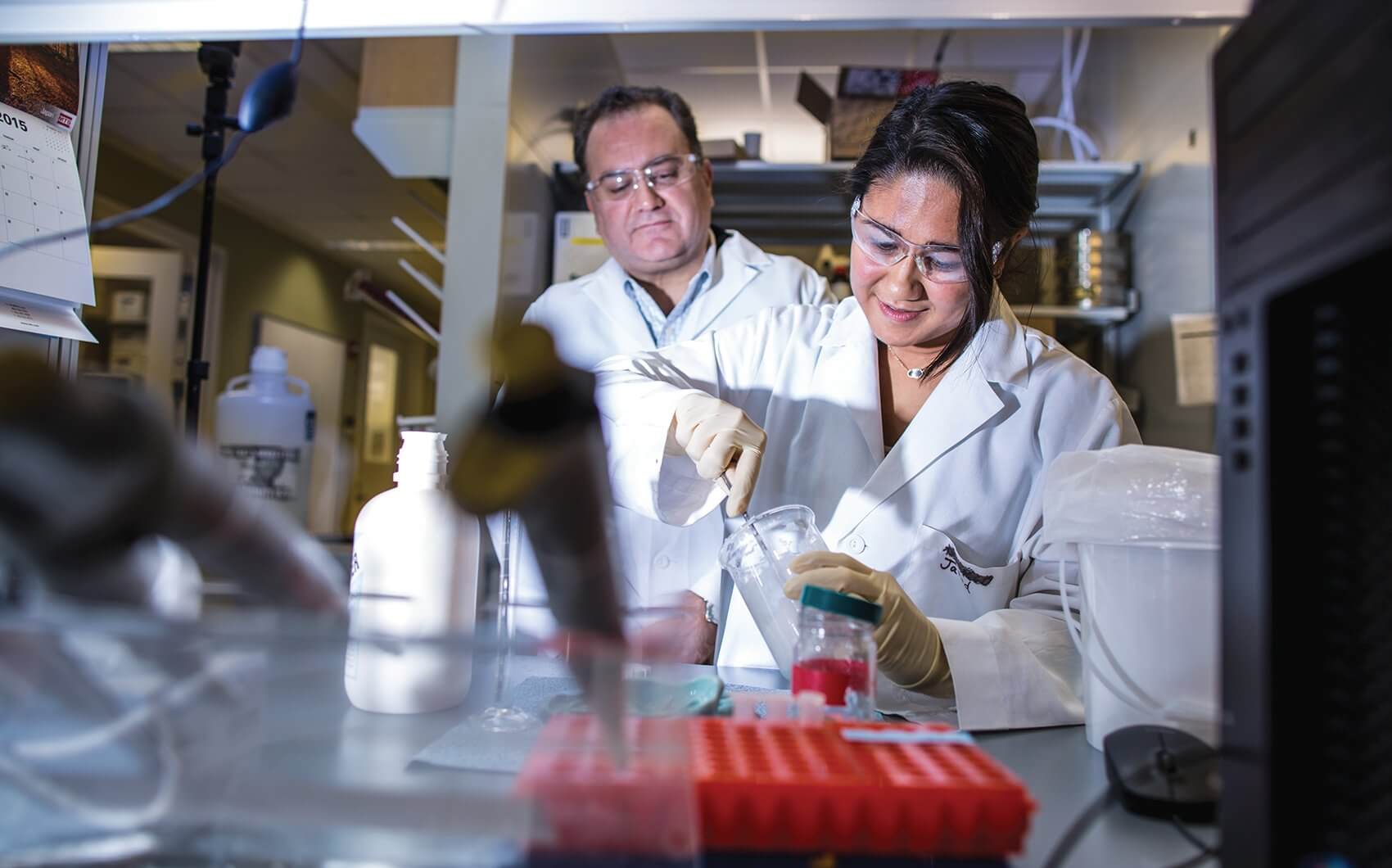 Within the fast-paced laboratory of Antonios Mikos, Ph.D., Louis Calder Professor of Bioengineering and Chemical and Biomolecular Engineering at Rice University, researchers strive to develop a wealth of materials to repair severe craniofacial injuries—often ones sustained through trauma or pathological defects like tumor removal. Unfortunately, one familiar, pesky interloper has the potential to jeopardize healthy recovery and tissue growth as patients receive temporary implants for facial reconstruction: infection.

“Infection is an important problem that needs to be considered with medical devices, because bacteria can prevent the body from being able to heal,” said Mikos, also director of the Center for Excellence in Tissue Engineering at Rice. “Infection can not only limit the ability of a medical device to perform, but it may also require the removal of the device itself. Depending on the extent of the infection, it can even lead to tissue necrosis—the death of previously healthy tissue.”

In their battle against the looming threat of infection, Mikos and his colleagues have come up with a solution—a unique way to deliver time-released antibiotics, warding off infection while a patient heals.

“Think of this as something that allows us to infuse a prefabricated implant with an antibiotic gel that would be slowly released after implantation,” Mikos said. “This would address any issues surrounding infection.”

For patients who have sustained a craniofacial injury, the lab’s prefabricated implants—essentially, specialized space maintainers—are designed to keep a pocket for new bone open while the overlaying soft tissue heals. In later surgery, the implant is removed to make way for reconstruction of the bone itself.

In this latest advance—the subject of a paper that appeared in the Royal Society of Chemistry journal Biomaterials Science in December—the space holders, known as porous polymethyl methacrylate (PMMA) implants, are filled with a gel that leaches its protective antibiotic contents to surrounding tissue. This protects the tissue from infection for at least several weeks.

“At the time of surgery, the physician can decide what kind of antibiotic they want to put into the implants by directly mixing it with the thermogel,” said Sarita Shah, one of the paper’s co-authors and a graduate student at Rice University and Baylor College of Medicine’s M.D./Ph.D. Medical Scientist Training Program (MSTP). “That gives the surgeon incredible flexibility.”

Led by Paschalia (Lina) Mountziaris, M.D., Ph.D., an MSTP alumna and post-doctoral fellow in Mikos’s lab, the researchers noted that infections from the external environment and from neighboring structures—such as nasal passages, sinuses and the mouth—can attack vulnerable tissue. Several studies have indicated wound infections from gunshot injuries to the face are common.

While researchers at Rice and elsewhere have experimented with porous implants previously, they are susceptible to invasion by infectious bacteria. The Mikos lab’s solution? Fill the pores at the point of care with a thermogel that infuses the spacer as a liquid and solidifies into a gel when exposed to body heat.

“PMMA can be thought of like a plastic,” Shah said. “It’s really there to maintain space. But by introducing the porosity into it, we’re able to make it a little bit rough on the outside. That roughness makes it easier for tissues to attach, so that when you put it into the mandible, the gums can attach—and stay attached—to it.”

The porosity of the PMMA space maintainer compounds with the special properties of the thermogel itself. It consists of a block copolymer, a self-assembling combination of two polymers that is also under investigation for the controlled release of chemotherapy drugs.

“Block copolymers can offer a lot of benefits since they are designed to take advantage of the strengths of individual polymers,” Mikos said. “The block copolymer we used for our study was designed to be able to take on water, become a gel at body temperature and slowly degrade over the course of implantation.”

According to Mikos, soldiers are at particular risk for infection, as battlefield injuries are often susceptible to multidrug-resistant species of bacteria that invade between the time of injury and treatment.

“The technology was designed to address problems in infected wounds of soldiers coming back from Iraq and Afghanistan,” Mikos said. “What we’re trying to do in our laboratory, in collaboration with colleagues at The University of Texas Health Science Center (UTHealth), is to develop materials and technologies that will enable us to regenerate composite tissue defects that are infected.”

The project is part of a $75 million, five-year Armed Forces Institute of Regenerative Medicine grant to Rice, UTHealth and collaborating institutions to develop technologies to not only treat soldiers on the battlefield, but advance care for the public, as well.

“Right now, the people that this would be useful for in a non-military setting would be individuals who have either cancerous tumors or benign cysts of the jaw—because those are very defined resections,” Shah added. “In addition, cancer patients may also get radiation treatment along with the resection, which also makes them prone to infection. This would be a great advance for that kind of reconstruction.”