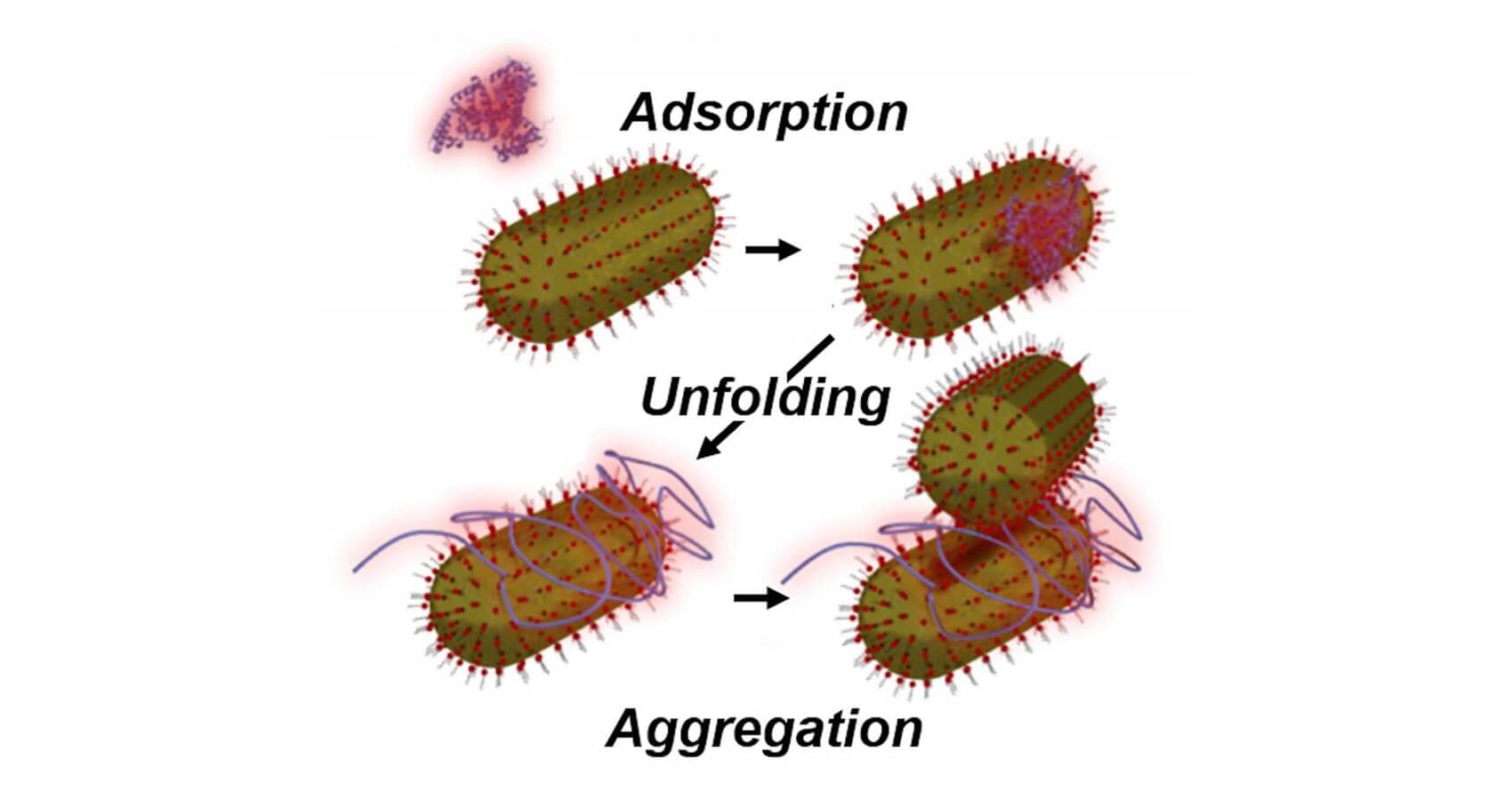 Blood serum proteins have been observed combining one-to-one with gold nanoparticles and prompting them to aggregate, scientists at Rice University reported.

This is unexpected, according to Rice researchers Stephan Link and Christy Landes, who have led studies of the proteins most responsible for keeping solids in blood separated. In low concentrations, they said, the proteins irreversibly attach, unfold and then bring nanoparticles together.

This is counter to the purpose of albumin proteins, the most abundant in the blood stream, they said.

The paper, published this month in the American Chemical Society journal ACS Nano, has implications for diseases caused by aggregation, like Alzheimer’s, and for nanoparticle toxicity issues, the researchers said. Gold nanoparticles are increasingly being used as therapeutic agents.

Several years ago the Rice team found that higher concentrations of bovine serum albumin (BSA), a near-match for its human counterpart, could keep naturally hydrophobic gold nanoparticles from clumping. In new experiments, some using technology that has only become available in recent years, BSA proteins in low concentrations were observed to unfold in the presence of gold nanoparticles.

“We think the protein is attaching first and unfolding, and that prevents other proteins from coming in,” Link said. “But it also facilitates the aggregation.”

“This is the most common protein in blood serum,” Landes said. “Its job is to surround and make a nice hard shell around anything in solution that would otherwise be insoluble and stabilize the complicated mixture of cells, proteins and hormones in blood.

“What’s important is the protein’s ability to successfully coat otherwise hydrophobic steroid hormones, nanoparticles, viruses, anything,” she said. “But in order for it to make that coating, it needs to stay nicely folded.”

By unfolding in the presence of gold nanoparticles, they said, the protein does two things: It spreads out on the particle, leaving no room for other proteins to attach, and exposes its usually hidden hydrophobic core, which encourages aggregation with other protein-nanoparticle sets.

“This is an issue whether people use nanoparticles for therapeutic purposes or just come into contact with nanoparticles in products or the environment,” Landes said. “If serum albumin can do its job, everything’s fine. But we can’t help but notice that protein unfolding, protein aggregation and fibril formation are at the root of all sorts of diseases.”

They also noted that two other blood-borne proteins, fibrinogen and globulin, cause gold nanoparticles to aggregate regardless of their concentrations. “They unfold no matter what the concentration, meaning that the BSA or human serum albumin are really designed to make this coating and keep everything from running out of control,” Link said.

“We’re saying people really need to pay attention to the ratio between the protein – in this case, BSA – and nanoparticles, because different things can happen.”

Co-lead authors of the paper are Rice alumni Sergio Dominguez-Medina, now a postdoctoral researcher at the French Atomic Energy and Alternatives Energy Commission in Grenoble, France; and Lydia Kisley, now a postdoctoral research associate at the Beckman Institute and the School of Chemical Sciences at the University of Illinois, Urbana-Champaign. Co-authors are Rice graduate students Lawrence Tauzin, Anneli Hoggard, Bo Shuang, Sishan Chen, Lin-Yung Wang and Paul Derry; postdoctoral researchers Swarnapali Indrasekara and Anton Liopo; and Eugene Zubarev, an associate professor of chemistry and of materials science and nanoengineering.

Link and Landes are both associate professors of chemistry and of electrical and computer engineering.

The National Science Foundation, the Welch Foundation and the National Institutes of Health funded the research.