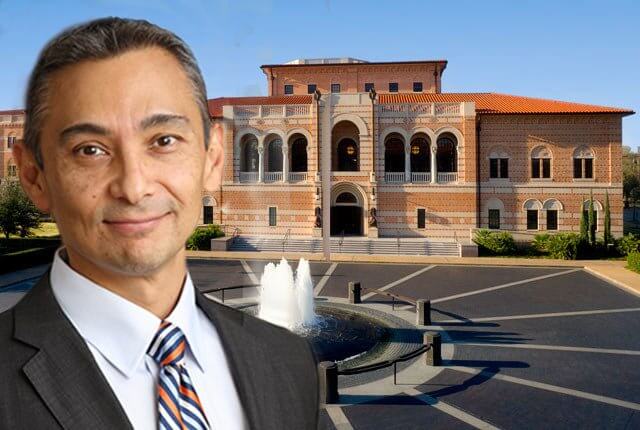 “Peter Rodriguez’s exceptional talent as a leader is evident from his broad impact at the Darden School,” said Rice Provost Marie Lynn Miranda. “As an accomplished scholar and educator, with a unique ability to connect with the many Jones School constituencies, Peter is exceptionally well positioned to lead the Jones School. We are both extremely grateful to current Dean Bill Glick for his service and leadership and very excited to welcome Rodriguez to the Rice community.”

Rodriguez is a Princeton-educated economist and specializes in the study of international business and trade, with an emphasis on understanding and alleviating the effects of corruption on economic development.

“I am thrilled to have the opportunity to join Rice as both a faculty member and as part of the leadership team at one of the country’s top business schools in one of its top cities,” Rodriguez said. “Rice is an outstanding university with a clear commitment to excellence in research, teaching and outreach at all levels.”

He said he looks forward to working with the Jones School Council of Overseers and the Houston business community to identify areas where the business school can best serve the community while also strengthening its global engagement and stature.

“I’m delighted that Peter is joining the senior leadership team at the university,” said Rice President David Leebron. “He brings an extraordinary breadth of experience and accomplishment. He is well positioned to lead the school to new heights in scholarly reputation, teaching excellence, global engagement and online programs.”

Rodriguez has served in his current position at the University of Virginia since 2011, where he leads the MBA programs at the Darden School and its global, online and diversity strategies. In this role, he helped lead Darden to the No. 2 spot in the Economist’s 2015 global ranking of full-time MBA programs, which was the highest ranking in the school’s history. For the fifth consecutive year, the Economist also named Darden the No. 1 education experience in the world. As part of this, Rodriguez was able to lead strategies for online initiatives and new Global MBA programs. He also prioritized faculty development, especially for junior faculty, and fostered a culture of leading-edge research and a deep commitment to teaching excellence.

Before joining the Darden faculty, Rodriguez was on the faculty of Mays Business School and the George Bush School of Government and Public Service at Texas A&M University. He also previously taught at Princeton University. In addition, he worked for several years as an associate in the Global Energy Group at JPMorgan Chase. Rodriguez has received numerous awards for teaching excellence in classes such as international macroeconomics and business-government relations.

As dean, Rodriguez will oversee a school that is distinguished by its strong foundation in accounting, finance, marketing, organizational behavior, and management with areas of substantive excellence in energy, entrepreneurship, and health care. Degreed programs include the Rice MBA, MBA for Executives and MBA for Professionals, as well as joint MBAs in medicine, engineering, and professional science, and a Ph.D. in business. The Jones School has also played an increasingly important role in undergraduate education at Rice.

Rodriguez succeeds Glick, who led the Jones School’s growth in enrollment and programming and increased national and international reputation for the past 11 years. Glick will return to the faculty.

“During Bill Glick’s term as dean, the Jones School experienced exceptional growth,” Miranda said. “We are grateful to Bill for his remarkable record of accomplishment over the past decade, which reflects extraordinary dedication to the Jones School and to Rice.”