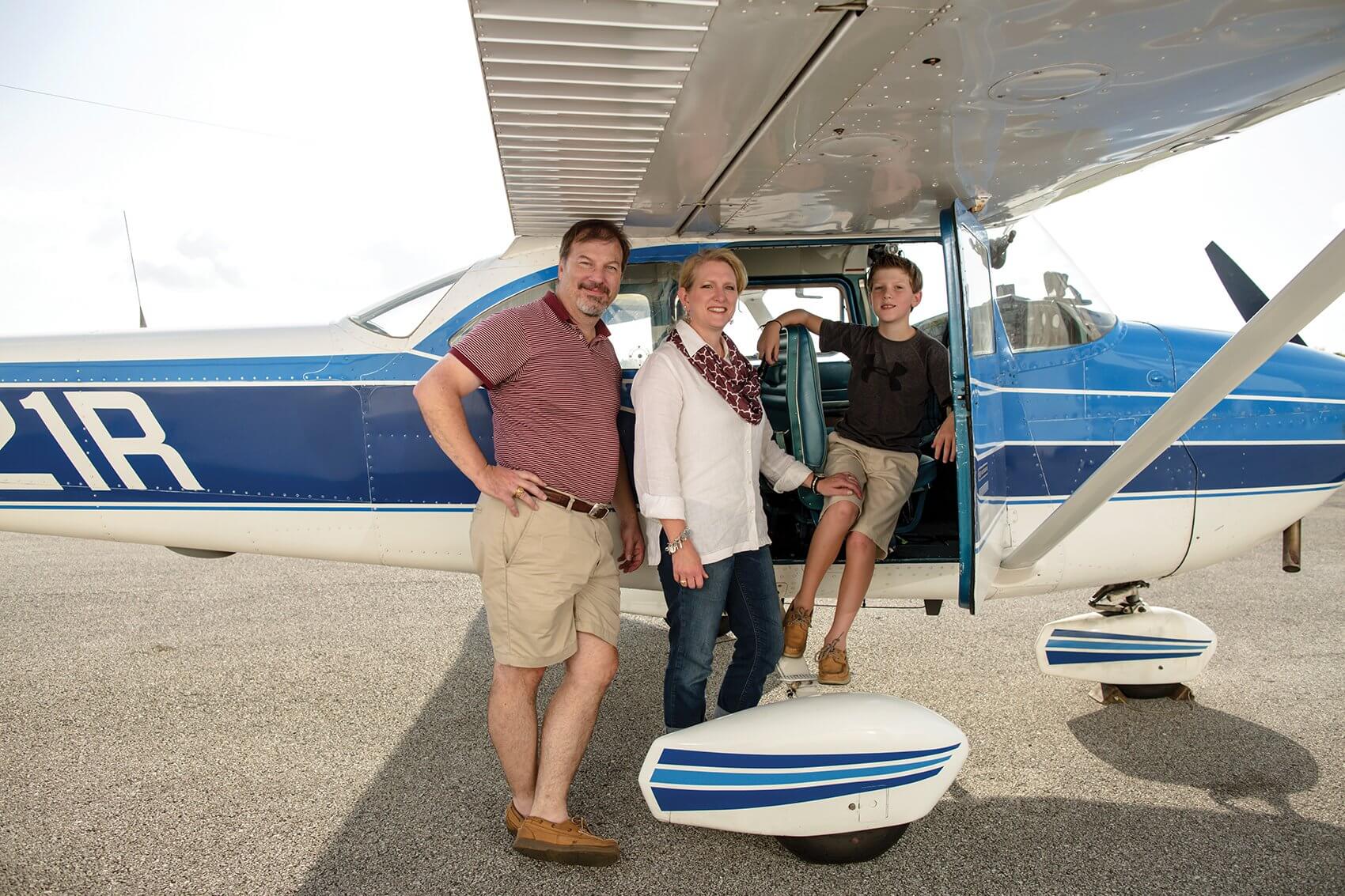 Gary and Linda Flynt still don’t know exactly what happened. That information will come with the official report from the National Transportation Safety Board, likely citing mechanical failure of some kind after an extensive investigation over the recovered Cessna 172 parts is complete. Until then, all they have is the string of facts they pieced together while recovering as a family at Memorial Hermann-Texas Medical Center (TMC).

It was July 7, 2014, and Gary, a NASA engineer and experienced flight instructor, had taken his wife and their youngest son, Jonathon, on an evening ride in their private plane. After 30 minutes in the air and a brief landing, the aircraft reached its final ascent at 300 feet when the engine inexplicably quit. Quickly calculating his options at that altitude, Gary searched for a safe place to land. To their left, stadium lights from a little league practice illuminated an open park next to a pair of baseball fields—it was perfect. Steadily guiding the plane in that direction, Gary prepared his family for landing when the plane’s right wing clipped a power line, abruptly twisting the aircraft and flipping it upside down. Just moments later, they made impact with the ground.

The family’s memories from the rest of the evening are vague and chaotic. A man with a baseball glove yelled into the cockpit to tell them EMS was on their way. Gary remembers calling out repeatedly to Linda and Jonathon, trying to confirm that both were OK. Within minutes, all three were taken by Memorial Hermann Life Flight helicopters to Memorial Hermann Texas Trauma Institute, where adult and pediatric trauma teams were waiting to evaluate their injuries.

“I barely remember anything from that night after the crash,” Linda recalled. “I know I was taken in for surgery pretty much immediately, and I remember feeling relieved knowing that Gary and Jon were together in the ER.”

Linda had suffered a neck fracture and a crushed carotid artery, as well as facial lacerations, a dislocated right elbow and multiple internal injuries including severe intestinal damage. Gary was being treated for a dislocated elbow, broken nose, lacerations to his face and difficulty breathing, while Jonathon had deep cuts in both knees as well as extensive fractures in his jaw.

“Jonathon was in the emergency bay next to me before he was taken into surgery, which was invaluable for my peace of mind,” Gary said. “Once I figured out that everybody had survived the accident and was conscious, I didn’t have a real concern because I felt like we were being taken care of, that we were in the best place for our injuries and that there wasn’t anything to worry about at that point. We were together.”

Alfred Mansour, M.D., UTHealth pediatric orthopedic surgeon at Children’s Memorial Hermann Hospital, which shares a campus with Memorial Hermann-TMC, was on call the night of the accident.

“After our trauma teams stabilized Jonathon, they brought him to the ICU, which is where I first saw him,” Mansour said. “The open cuts in his knees were very deep and a cause for concern, especially when you’re talking infection risk, which can cause permanent damage in children. He had also torn cartilage and his quadriceps muscle in one of his knees which, without surgery, would hinder his ability to walk. Once we determined how severe his wounds were and what kind of surgery would be required, I actually went down to the emergency room and found his dad. I explained the procedures and the details involved and told him I’d come back to give him updates. I didn’t want him just sitting there in the emergency room wondering how his son was doing and feeling helpless.”

Mansour noted that in a different hospital, one without expert pediatric and adult trauma care under the same roof, this kind of communication and continuity would not have been possible.

“There’s no better place to take a family for an injury than a hospital that can take care of the kids and take care of the adults at the same time,” he said. “The last thing you want as a parent, if you’re injured and your child is injured, is to be separated. You already feel
so helpless, and I think it’s a unique setting to be able to give updates to a family member directly at their hospital bed, or to bring a parent to his or her child’s room. It gives hope that can’t be replicated when you’re offsite.”

“That interconnectedness was priceless,” Linda said. “I needed to see my family during that time.”

Together, the road to recovery was made easier for each of them, despite the serious extent of their injuries. Jonathon’s jaw was wired shut for six weeks and he was unable to walk until his knees healed from surgery. He is now back to being “100 percent” according to both his physicians and his parents. Gary, who still deals with lingering joint and back pain, required help with daily activities until his arms and elbow healed. Linda, whose internal injuries mandated further hospitalization and an additional surgery a few months later, is almost fully back to her previous level of activity.

“I won’t say it hasn’t been tough, but we have the best family in the world and we were able to be together,” said Linda. “Memorial Hermann gave us that, on top of providing the best care we could imagine. I really cannot say enough about how incredible they
are. From our Life Flight team to all of our doctors and nurses, they were all such blessings. They were genuinely concerned for us, and we never once felt like we were just patients with any of them. They treated us like family.”

Indeed, after saving a father’s life, or caring for a mother during the hardest periods of recovery, or performing skillfully executed surgery to ensure a little boy can challenge his older brother to races again, it seems clinicians and their patients are often forever connected. It’s a bond marked by overwhelming gratitude and a shared story that, for some, changes the course of their lives.

Today, the Flynt family is back to flying. They often run into members of the Life Flight crew at Baytown Airport, home to one of the fleet’s helicopter bases as well as the hangar in which the Flynts keep their new plane. Jonathon and his older brother Charles, who was away at scout camp the night of the crash, are both enamored of the shiny red aircrafts, the cutting-edge trauma equipment inside, and the crew’s pilots and paramedics. Recently, Jonathon has even expressed interest in learning how to fly. And who knows? He may just end up piloting one of those red helicopters himself someday.