Taking Medicine to the Streets

Taking Medicine to the Streets 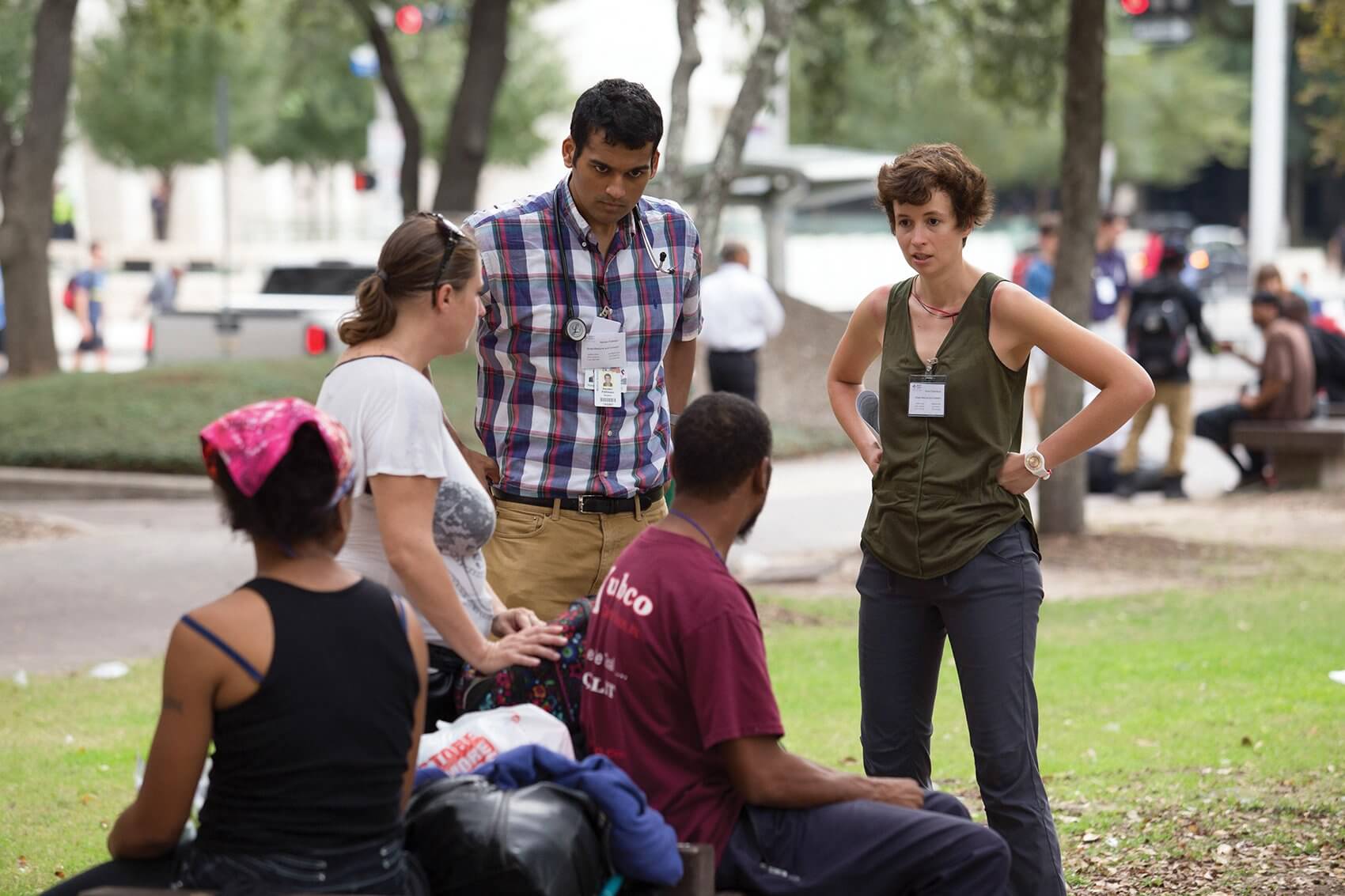 Set against the monolithic backdrop of downtown Houston, on a Thursday afternoon, Tranquility Park hums with activity. Congregating around park benches, groups of people chat animatedly while others doze on the grass or wedged against the park’s concrete walls. Kneeling down in front of one young woman, Arina Chesnokova, a medical student at Baylor College of Medicine, gently reaches out and puts a hand on her shoulder. “How long have you been on the streets?”

If the statistics are any indication, the old adage, “It could happen to any of us,” certainly rings true. According to the most recent report from the U.S. Department of Housing and Urban Development, more than 6,300 people in Houston are without a home on any given night. Compounding the issue, it’s estimated that more than a quarter to a third of the adult homeless population suffers from severe and persistent mental illness, preventing them from carrying out essential daily activities—even when it comes to addressing their own medical needs.

“Homelessness is a complex problem,” said David S. Buck, M.D., professor in the department of family and community medicine at Baylor College of Medicine, as well as president and founder of Healthcare for the Homeless-Houston (HHH). “It’s not strictly a medical problem, and stems from a combination of biological and psychsocial factors, but it can have real medical repercussions. Because of the challenges that those individuals face, we’ve learned that many of them are still being excluded from the health care system.”

In 1999, when Buck met with a group of medical students from Baylor College of Medicine and The University of Texas Health Science Center at Houston (UTHealth), along with social worker student George Bement from UH Graduate College of Social Work, they recognized the urgent need to provide services that benefited the city’s homeless population. Responding swiftly, the group established the HOMES (Houston Outreach Medicine, Education and Social Services) Clinic, the only student-managed medical clinic in Houston that seeks to provide both quality health care for patients and a meaningful educational opportunity for students.

“The students wanted a place where they could, first and foremost, provide services that were needed to homeless people,” Buck said. “My interest in this was really to build a cohort of leaders in underserved health care and expose them to some of the challenges while providing a nurturing environment early in their training.”

A joint collaboration between Baylor, UTHealth and the University of Houston College of Pharmacy, the HOMES Clinic is entirely student-managed, with oversight courtesy of both attending physicians and HHH, which continues to provide administrative and logistical support. Since its inception, the HOMES Clinic has engaged hundreds of student volunteers and served over 4,000 patients.

“A lot of students really love the fact that they’re getting early exposure to real patients,” said Camille Keenan, an M.D./MPH candidate at UTHealth Medical School and executive director of the HOMES Clinic. “You’re getting to use what you’re learning in a classroom in a real situation that is low stress and low pressure, so it really gives you an opportunity to grow and use your new clinical skills in a setting that actually matters.

“At the same time, once they volunteer at the clinic, they also take away a better understanding of these people’s situations,” she added. “They’re able to understand more where homeless individuals are coming from, and cultivate an additional level of respect for those who work in the field of mental health, because that addresses a huge portion of the population.”

Maintaining clinic hours every Sunday—studies have shown that medical care is nonexistent for the homeless on that day, with the exception of local emergency rooms—the students arrive promptly at 9 a.m. Shedding their white coats and badges, they spend the first hour of the day meeting patients—simply sitting down and striking up a conversation to gain some insight into the lives of the people they’ll serve. Afterwards, interdisciplinary teams of three, which include a clinical student, a basic science student, and a pharmacist-in-training, will see their first patient. Following a comprehensive, 45-minute evaluation, the teams present the patient to the attending physician to formulate and review a plan of care. Finally, after each team has seen two patients, a group reflection session enables them to decompress and process their experiences.

“The biggest thing, for us, is not only treating patients then and there, but also trying to let them know about the resources that are available now that they’ve seen us,” said John T. Sigalos, a medical student at Baylor and one of the managers at the HOMES Clinic. “Maybe now they can get help on social welfare issues or come back to the clinic during regular hours to continue their treatment. Most of the stuff that we do is fairly chronic, and we want our patients to get into the system so that they can receive continuous treatment.”

Even in the wake of concerted efforts throughout the city to house its residents—the number of homeless people residing in shelters or in public spaces in the Houston area has reportedly dropped 46 percent in the past four years—there are still significant strides to be made. According to Buck, emerging barriers to homeless care, such as day shelter services provided only for individuals who are defined as “chronically” homeless, pose the potential to exclude large swaths of the population.

“My worry is that the people who are most at risk, those that are seriously mentally ill, are the ones that we’re not reaching because they’re unable to make it to our clinics,” he said. “In medicine, we’re taught that you ‘build a clinic and they will come,’ but it’s the people that aren’t coming to our clinics that we need to target. We need to make them more accessible to us, and vice versa.”

Seeking to engage individuals who might otherwise slip through the cracks, that concern spurred Buck and his colleagues to action. In conjunction with several of the HOMES Clinic’s medical students, HHH and Star of Hope Mission, and leveraging advice from the Michael E. DeBakey VA Medical Center, they’ve worked to develop a local street outreach team. With stethoscopes dangling from
their necks and armed with hygiene kits containing toothbrushes, shaving cream, soap, socks and other essentials, the students have already walked the streets of downtown Houston on several occasions.

“We wanted to develop a program here where the students could meet people, on the street, on a Thursday afternoon, and follow up with them and develop continuity of care for the Sunday clinic,” said Buck. “I think the heart of true health care is engaging people in a care plan of their own device, that reflects their own goals— not ours—to help them reach their potential. We don’t provide medicine on the street because our goal is to engage people in care and to get them to the activation point where they’re willing to fulfill their own health care needs.”

Tapping into a broader cultural conversation, seven students from UTHealth and Baylor recently returned from a trip to this year’s annual International Street Medicine Symposium (ISMS) in San Jose, California. An educational event dedicated to the health care of unsheltered homeless populations—known as “rough sleepers” throughout the community—the ISMS offered a slate for homeless health care experts from around the globe to present clinical topics, research outcomes, and best practices related to street medicine.

“The street outreach team is really changing our paradigm,” said Kenneth D. Eakins, outreach case manager for Star of Hope Mission. “It’s allowing us to see the need that’s around us, and how we’re able to partner and partici- pate together as a team with a common purpose. Together, we can truly make an impact and begin to transform lives and gather greater resources for our clients.”

For students like Chesnokova, conveying medical expertise, empathy and conviction in her mission, her last question to her patient unfurls a blank page of possibility and progress. “We’re going to make you an appointment for this Sunday—do you think you’ll be able to make it?”