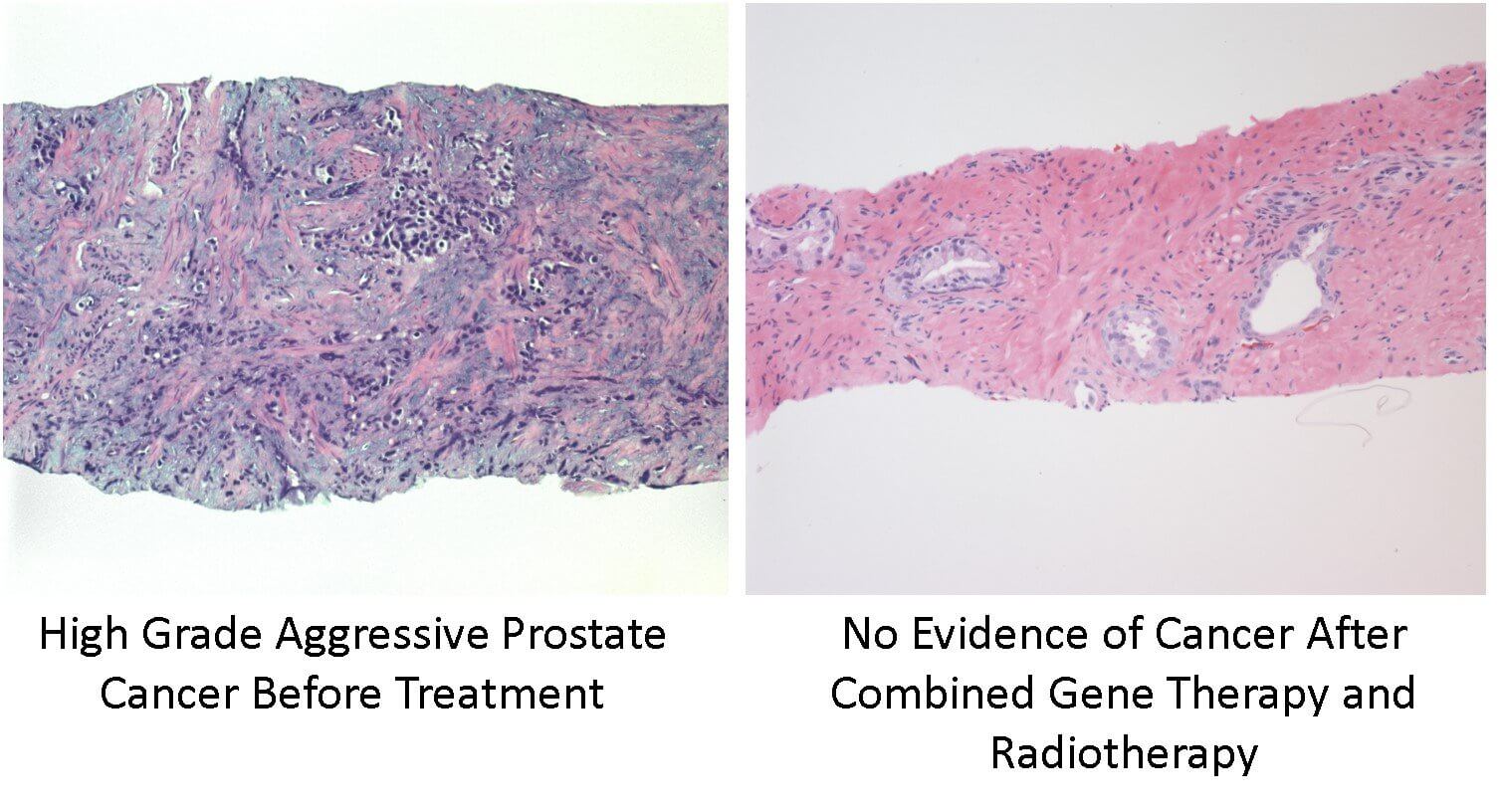 Results from a long-term clinical trial conducted by cancer researchers at Houston Methodist Hospital show that combining radiation treatment with “suicide gene therapy,” a technique in which prostate cancer cells are genetically modified so they signal a patient’s immune system to attack them, provides a safe and effective one-two punch against the disease.

The researchers compared two arms of patients and report high five-year overall survival rates of 97 percent and 94 percent, respectively. That’s a five to 20 percent improvement for survival over historical studies. These findings are in the Dec. 12 online issue of the Journal of Radiation Oncology (JRO).

Sixty-six prostate cancer patients participated in the Phase II clinical trial between 1999 and 2003 and were split into two groups. One group with cancer cells confined to the prostate, designated Arm A, received only radiotherapy while the other with a more aggressive prostate cancer, Arm B, received both radiation and hormonal therapies. Patients in Arm A received the experimental gene therapy twice during the study, while the Arm B group received the treatment three times.

“We strategically used an adenovirus, similar to the one that causes the common cold, to carry the therapy agent—a herpes virus gene that produces the enzyme thymidine kinase, or TK—directly into the tumor cells,” said E. Brian Butler, M.D., chair of the Department of Radiation Oncology at Houston Methodist and senior author on the JRO paper. “Once the herpes virus gene was delivered and it started manufacturing TK, we gave patients a commonly used anti-herpes drug, valacyclovir. The combination attacked the herpes DNA, and the TK-producing tumor cells self-destructed, which is why the procedure is called ‘suicide gene therapy.’”

Butler said that once the activated valacyclovir (trade name: Valtrex) starts destroying tumor cells, it also alerts the patient’s immune system, previously unaware of the cancer’s presence, that it is time to launch a massive attack.

“We have created a vaccine with the patient’s own cancer cells, a treatment that complements, and may even enhance, what we can achieve with traditional radiation and hormonal therapies,” said Butler, professor of radiation oncology, Weill Cornell Medicine.

According to the results reported in the JRO paper, the long-term outcome for prostate cancer patients receiving gene therapy in combination with radiotherapy with or without hormonal therapy is promising. The 62 patients in both arms who completed the clinical trial had remarkably high five-year freedom from failure rates, meaning no indication by biochemical testing of cancer recurrence, of 94 percent and 91 percent, respectively. Prostate biopsies performed at 24 months after completion of treatment were negative in 83 percent of Arm A patients and 79 percent of Arm B patients.

For all evaluative factors, the outcomes were remarkably higher than those achieved with radiotherapy alone (in data taken from historical studies used as controls).

“This is extremely pleasing to us, considering we had patients enrolled in our protocol after other physicians deemed them incurable,” said Bin Teh, M.D., vice chair of Houston Methodist’s Department of Radiation Oncology and lead author on the JROpaper. “We firmly believe this will be a viable treatment strategy.”

Adding to the impressive therapeutic results, Teh said, is the fact that the majority of patients in the clinical trial experienced little or no side effects or complications. A Phase III patient trial, the final safety and efficacy evaluation for the in-situ immunomodulatory gene therapy before it can be approved by the Food and Drug Administration, is already underway. Prostate cancer is the most common cancer in men and causes significant mortality.

The work was supported by grants from the National Cancer Institute, the Houston Methodist Hospital Foundation and the General Clinical Research Center.