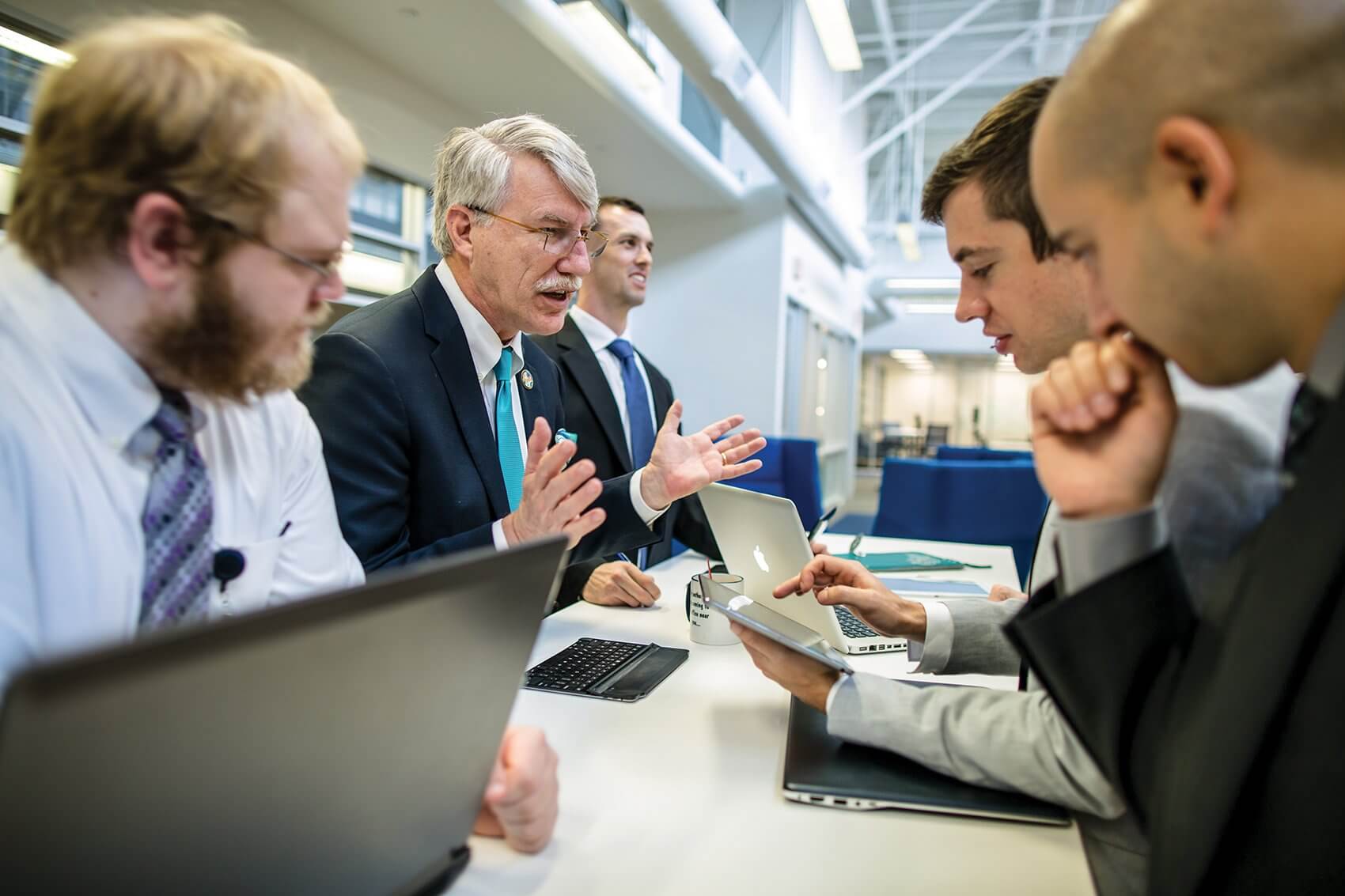 Within the offices of TMCx+, the Texas Medical Center’s coworking space designed to meet the needs of emerging companies, the plausible and the implausible are being brought together. An analytics company builds predictive algorithms to help clinicians improve patient outcomes; a team of neuroscientists and designers craft a vest that allows deaf individuals to perceive auditory information through small vibrations on their torso; and a biotechnology company develops virus-driven immunotherapies
for cancer. For these driven entrepreneurs, this is just the beginning.

“We’re at a juncture in technology development where science is catching up with science fiction,” said Emma Fauss, Ph.D., co-founder and chief executive officer of Medical Informatics. “That’s something that we can take for granted in our daily lives, like using a GPS for making turn-by-turn directions. What we’re trying to do is get health care up to speed with the rest of the world. The reality is that every other industry uses data technology effectively, and health care doesn’t, but health care is the one thing that really matters—it’s lives at stake.”

From the ICU to the ER, critical care nurses and doctors are required to make crucial, life-altering decisions in the blink of an eye. For health care providers in a stressful environment, singling out high-priority alarms from an ever-present cacophony of patient monitoring devices can seem frustrating and futile. With all that information to sift through, what’s important and what isn’t?

“There’s a severe void in supporting technologies to help providers make those split-second decisions,” Fauss said. “In cases where those time-critical decisions need to be made, we’re trying to empower care providers by leveraging serious, real-time analytics.”

Those analytics make up the backbone of Medical Informatics’ vision for the future. The company’s “Sickbay” technology platform collects continuous streams of high-resolution physiological data from an entire spectrum of monitoring equipment—bedside monitors, EMRs and other ancillary devices. Weaving together science, analytics and medicine, Sickbay, has the ability to reduce alarm noise at the source, enable virtual patient monitoring and even predict patient deterioration before it occurs.

“Essentially, we’re GPS for doctors,” said Craig Rusin, Ph.D., co-founder and chief technology officer of Medical Informatics. “Our goal is to use mathematical tools to extract hidden information from within patient data and present that to doctors in an intuitive way so they can treat their patients more effectively.”

The idea of predictive analytics can seem abstract and removed—a data scientist’s interpretation of the sci-fi conceit behind the movie Minority Report, where supernatural psychics prevent crimes before they occur—but Medical Informatics isn’t looking to some far-flung future. With their system in place at Texas Children’s Hospital and the recently demonstrated ability to predict cardiac arrest in single ventricle patients one to two hours beforehand, Medical Informatics is helping span the gap between the bench and bedside. By putting their discoveries into practice, individual patients are already reaping the benefits of their technology.

“A great example of that involves one particular patient who was in respiratory distress for many days,” said Fauss. “The problem was that because they weren’t deteriorating, the snapshots of the monitor data that you would see next to the bedside didn’t accurately reflect the fact that the patient was fighting their own ventilator. By using the analytics that we were providing, the providers realized, within seconds, that this kid was in respiratory distress and they needed to change the treatment.

“When we talk about approaching science fiction, that’s really what it is,” she added. “We’re pushing the edges of what is possible in individualized patient care.”

Down the hall at TMCx+—the fully furnished space contains 13 modular suites, each complete with two executive offices and a pod of desks that can support up to eight people—what looks like athletic wear adorned with strands of Christmas tree lights is draped over the back of a chair and sewing machines line the windowsill. The inspiration behind this high-tech vest? Nothing too ambitious—just an attempt to expand human perception beyond the limits of our five senses and provide a new sense of hearing for deaf individuals in the process.

“The VEST actually stands for ‘Versatile Extra-Sensory Transducer,’” said Scott Novich, Ph.D., co-founder and chief technology officer of NeoSensory. “It all stems from the idea that we can take in any sort of real-time information stream, like sound, and map it to your sense of touch to actually acquire a new sense—in this case it’s for the benefit of people who are deaf.”

Known as a ‘sound-to-touch sensory substitution system,’ the VEST functions by picking up all the sounds in an environment, with the help of a cell phone, and converting them to electrical signals that vibrate in different locations and at different frequencies on an individual’s torso. Within a few hours of training, someone deaf from birth can “feel” distinct, individual words.

According to neuroscientist and NeoSensory co-founder David Eagleman, Ph.D., who developed the technology alongside Novich as part of the latter’s doctoral thesis, applause feels a little bit like a massage.

“As soon as you put it on, you can start to gain a basic sense of the sound around you,” Novich said. “But generally, you’re not going to immediately understand that. It takes a lot of training. In that sense, it’s similar to learning a new alphabet, but with a bit more information.”

There are approximately 70 million people on the planet who have profound hearing loss, according to the World Federation of the Deaf. At a projected retail cost of less than $1,000, the vest is expected to sell for one fortieth the price of a cochlear implant. For Novich, whose eyes grow wide with excitement at the prospect of augmenting existing senses, the potential applications don’t stop there.

“The idea there is that maybe you can start developing these deeper intuitions,” Novich said. “Let’s say you’re an airplane pilot and you have all these sensors attached to a remote vehicle. What if you mapped all this information through the vest to you? The vehicle would become an extension of yourself.

“Personally, I’m really interested in gaining ‘super-senses’ for senses that we already have,” he added. “Imagine if you had the ability to give yourself supersonic or subsonic hearing, to hear like an elephant, or even see outside your normal visual range. Are all of these things possible? I like to think so.”

Several rooms over, the boundaries of possibility are being tested in another way. At DNAtrix, a biotechnology company with offices in both Houston and San Diego, the most valuable weapon in their battle against cancer—specifically, a devastating brain tumor known as glioblastoma—is a modified version of a virus that causes all of us to reach for our tissues this time of year: the common cold.

“What we’ve done is take advantage of the fact that viruses are really good at getting into certain cells and making copies of themselves—that’s a natural property,” said Frank Tufaro, Ph.D., chief executive officer of DNAtrix. “The drug that we’ve developed is what’s known as an oncolytic virus, which normally causes the common cold, but has been modified so that it’s very aggressive and can only infect and kill tumor cells. We inject it into a brain tumor, and once it’s there, it starts killing the tumor, cell by cell. It’s an amplification of the virus itself.”

Known as DNX-2401, the company’s flagship product represents the culmination of more than a decade of scientific research. Originally the brainchild of scientists and neuro-oncologists at The University of Texas MD Anderson Cancer Center, Tufaro and
his colleagues are confident that DNX-2401 is the most potent and effective oncolytic virus delivered to human brain tumors to date.

“This is the most aggressive virus ever put into the human brain, but we’ve modified it so that it actually recognizes the tumor cell, specifically, sticks to it, and infects it,” Tufaro said. “If you put that together—the ability to replicate, the potency of the virus, and the safety factor of having it only target tumor cells—you can put it into the brain in pretty high doses without worrying.

“We’ve seen it shown in over 100 patients that DNX-2041 is not only safe, but it has the capacity to eliminate tumors,” he added. “Some of our patients have been alive for over four years who have been treated with a single dose of the virus. The next challenge will be to improve upon how many people respond.”

While the companies’ aspirations are as different as their offerings, collocated office space isn’t the only thing bringing them together. They’re all driven by that same sense of purpose, passion and possibility.

“It’s not going to be just one drug or product that is a cure-all,” said Imran Alibhai, Ph.D., managing director for DNAtrix’s Houston offices. “There are going to be many that come to market in order to provide fruitful solutions for patients. We feel fortunate to be
a part of a collaborative environment bringing these advances forward.”