Rice University scientists have developed a hydrogel that could play an important role in saving surgical patients’ lives. The special ingredient: an enzyme found in snake venom. 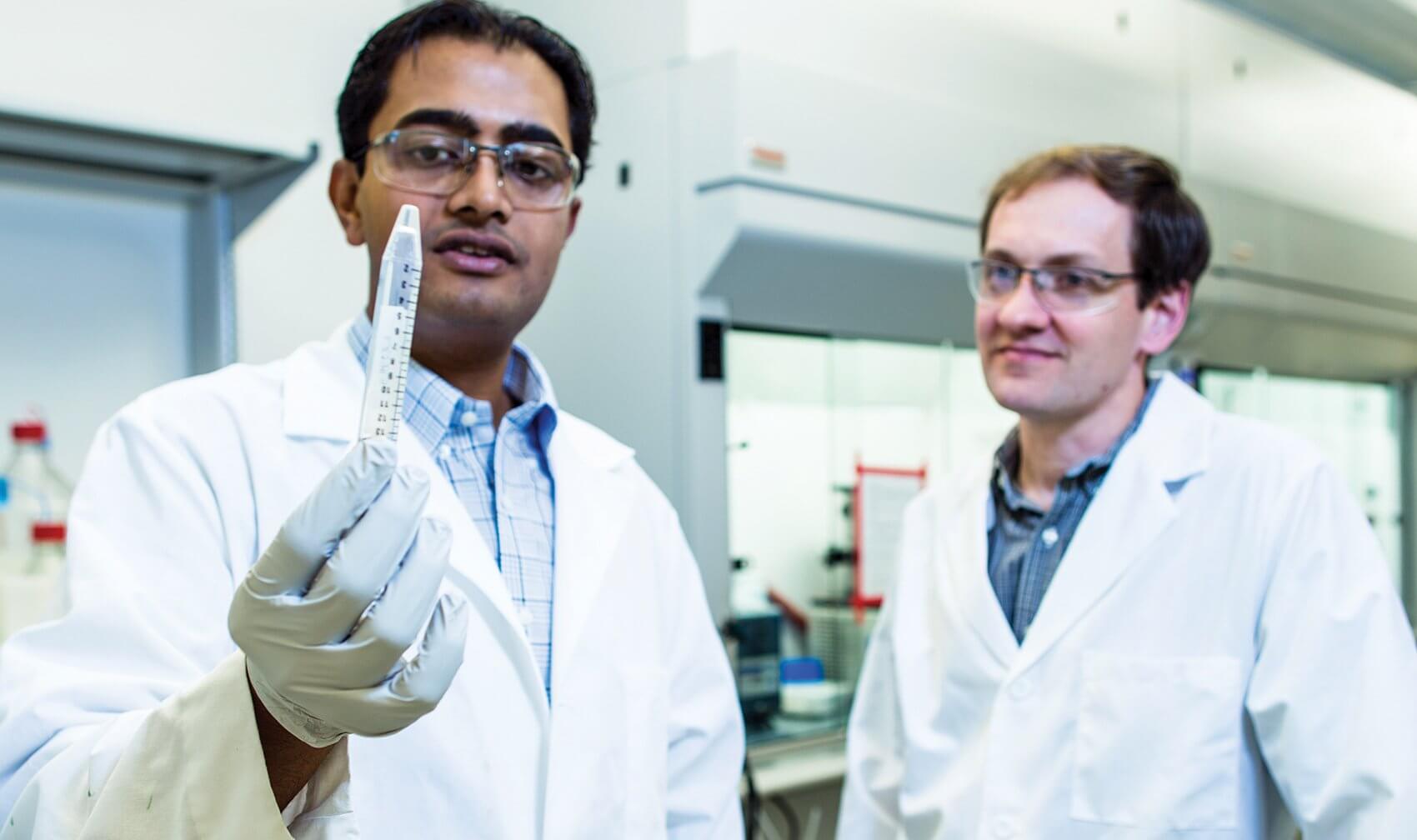 Lead author and researcher Vivek Kumar, Ph.D., and Rice professor of chemistry and bioengineering Jeff Hartgerink, Ph.D., published their study in the American Chemical Society Biomaterials Science and Engineering journal, where they showed how the enzyme batroxobin, produced by South American pit vipers, can be used to clot blood in six seconds. The study combined Hartgerink and Kumar’s decade-long pursuit of developing an injectable hydrogel scaffold designed to heal wounds and stimulate natural tissue growth with Kumar’s idea to incorporate a blood-clotting component.

“It’s interesting that you can take something so deadly and turn it into something that has the potential to save lives,” Hartgerink said.

For ophidiophobiacs and skeptics, rest assured: There were no actual snakes involved in this study.

“If you look at the popular media that’s taken hold of this thing, you would think we had a laboratory full of snakes,” Hartgerink said. In reality, the scientists were able to obtain batroxobin necessary for the study in a way that didn’t require handling any scaly adders.

“We’re not purifying it from snake venom, so we don’t have concerns about exogenous toxins, byproducts or what have you,” Kumar said, explaining that they eliminate risk of toxicity by creating it in a lab, recombinantly expressing the enzyme in E. coli.

Hartgerink said many people are surprised to see the words “snake venom” in their paper, but batroxobin’s properties are rather well known and it does not pose a toxicity threat by itself, particularly in this application.

The hydrogel Kumar and Hartgerink developed only uses nanograms of batroxobin and allows them to localize the material to a specific injection site, eliminating possible risks of using too high of a concentration and the material traveling to other places.

One of the primary uses Hartgerink and Kumar see for their hydrogel is in surgical settings where precision and accuracy are critical for successful outcomes.

“For traumatic bleeding, there are quite a number of ways people have used to stop bleeding. If you think about it, if you’ve had a life- threatening injury, anything that will stop the bleeding is good. It doesn’t have to be some wonderfully tailored material,” Hartgerink said. “But in a surgical bleeding case, particularly if you’re heparinized, you don’t want to use what’s basically glorified clay, what’s used to stop bleeding in traumatic situations, because of other problems it causes—including burns and other things.”

Heparin, a common blood thinner administered in drip form to patients before surgery to reduce the risk of blood clots, blocks off the functions of thrombin, an enzyme that plays a factor in the blood coagulation process. But batroxobin is unique in that it is not inhibited by the presence of heparin. This is particularly important in the surgical arena. If a patient is on anticoagulant therapy, it’s not uncommon for doctors to reject them for different surgeries because of the bleeding risk, but batroxobin will work regardless of heparin. By the way batroxobin works when it’s within the hydrogel, the material is designed to more accurately and precisely control bleeding.

“The [hydrogel’s] scaffold provides an anchor to localize the response,” Kumar said. In the case of surgical bleeding, the batroxobin serves as a chemical barrier, while the hydrogel acts as a physical barrier. “It’s like a double whammy.”

This precision is in part due to the nature of the thixotropic hydrogel. Once loaded into the syringe, the hydrogel maintains its gel state until it is pushed through the needle. The sheer force applied to the material as it goes through the needle turns the hydrogel into a liquid, then returns to its solidified state as soon as it comes out of the other end of the needle, delivering the material into a localized area.

“This is exactly how ketchup works,” Hartgerink explained. “If you put ketchup in a bottle, it’s this thick material that you can squirt out just fine and then resolidifies on your hamburger, so it doesn’t go dripping all over the place. That’s exactly the same thing when we apply [the hydrogel].”

For Kumar, the science was a met at a rare intersection of social media and applicability to decade-long research.

One of Kumar’s friends had posted on a social media platform a BBC News article in which people extracted venom from a snake’s fangs and added a drop of the poisonous secretion into a cup of blood. Within a minute, the blood reacted with the venom and congealed into solid form, sparking Kumar’s interest and prompting him to share his curiosity with Hartgerink.

Within 18 months of seeing the video, Kumar and Hartgerink were able to conduct the study, test the research and publish their findings.

Although Kumar and Hartgerink were able to publish their findings in a short period of time, they said it will take two to three years before it is approved for clinical trials and another five or more years of evaluation.