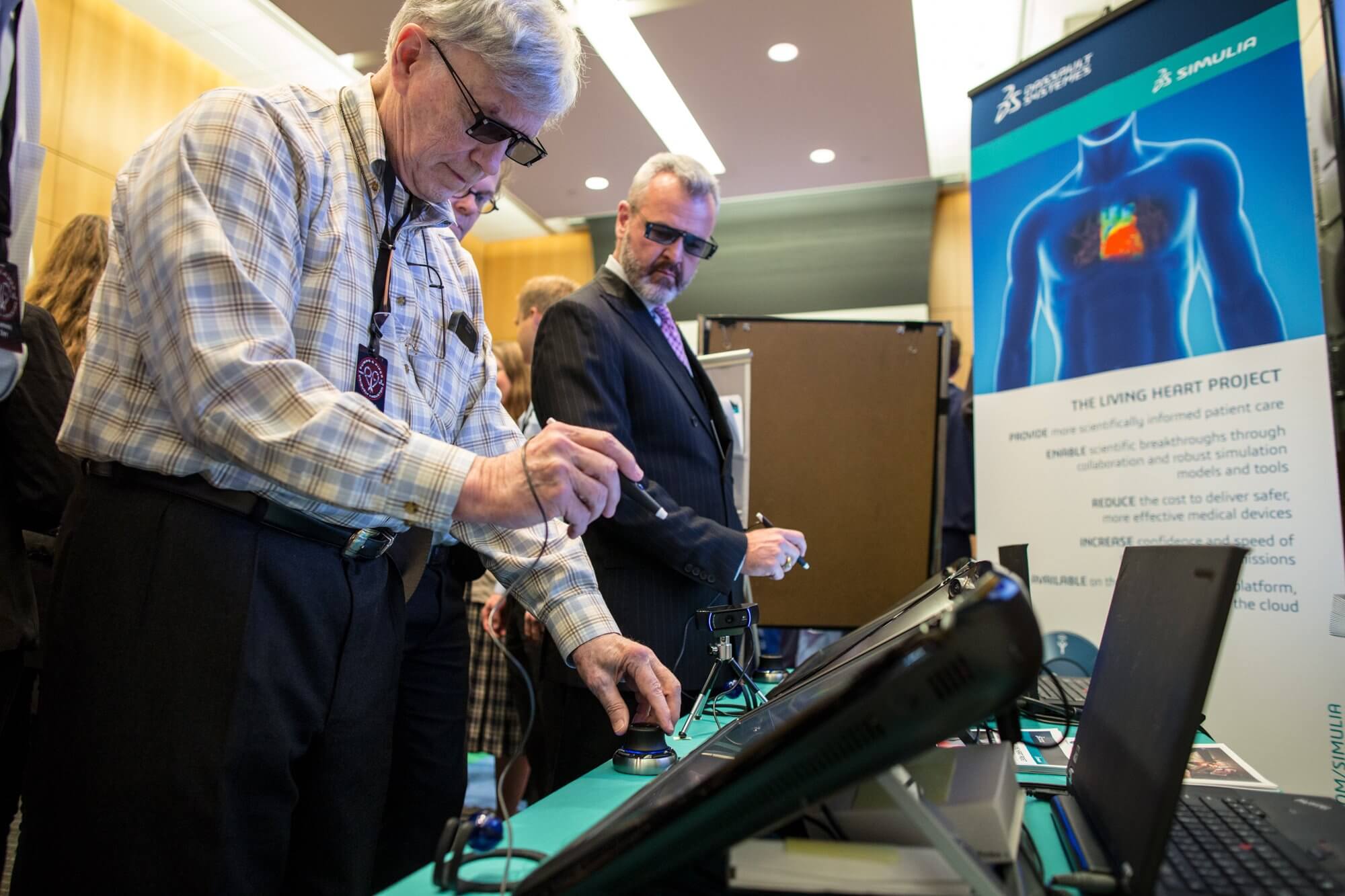 What do oil and gas engineers, cardiovascular surgeons and aerospace experts have in common? On Monday, Dec. 7, professionals from all three uniquely Houston industries gathered at the Houston Methodist Research Institute (HMRI) for the 9th annual Pumps & Pipes conference. Providing a platform to bring together professional groups who may not otherwise have the opportunity to interact, the day served as a showcase for the transfer of knowledge, technology and industry expertise.

“This is a chance to look into ‘the other guy’s toolkit,’” said Alan B. Lumsden, M.D., medical director of the Houston Methodist DeBakey Heart and Vascular Center and co-founder of Pumps & Pipes. “It’s about getting an opportunity to meet people that you wouldn’t normally get to meet, and to talk to them.

“One of the things that we’ve learned is that this is an exercise in communication—we don’t normally talk to drilling engineers or aerospace engineers,” he added. “It’s about communicating concepts, so we always try to choose concepts that enable us to help each other, because we fundamentally believe that this is where breakthroughs occur.”

Lumsden recalls the chance encounter that inspired the inaugural Pumps & Pipes event in 2007—a fortuitous seat reassignment that landed him next to an oil and gas engineer on a cross-country flight.

“It came about through serendipity, really—all of the greatest things happen because of serendipity,” he noted. “I was sitting on an airplane, working on a PowerPoint presentation, and had been upgraded, by chance, to first class. It turned out that I was sitting next to an oil and gas guy. He said to me, ‘What are you doing?’ and I said, ‘Sorry, I’m looking at these pictures that are about joining two tubes together—blood vessels.’ And he said, ‘That’s what I do! I’m a pipeline engineer and I work for ExxonMobil. I know the guy who you need to talk to.’”

The individual in question—William E. Kline, Ph.D., manager of drilling and subsurface at ExxonMobil Upstream Research Company—would soon become the second co-founder of Pumps & Pipes. The conference has been rapidly gaining momentum with each passing year, eventually expanding to encompass the field of aerospace and manned space flight.

“People always ask me, ‘What’s the difference between Pumps & Pipes and other technical conferences?’” Kline said. “Well, the difference is that we start with great things and learn from people who have done great things. That’s what today is about. And, of course, you have to pass it on.”

Passing on those insights has become a major focus of Pumps & Pipes. Chronicling a series of landmark achievements that would be unveiled throughout the conference—from the first-ever autonomous navigation of a robotic catheter to the announcement of Euro Pumps & Pipes, a collaboration with Norway that was formalized just days prior—Lumsden continuously emphasized different ways of bringing STEM education into the classroom.

“One of those is xTV—we’re going to be broadcasting today’s event out on a unique TV channel for students and teachers,” he said. “In addition, much like TED Talks, we’ll be creating and hosting Pumps & Pipes talks throughout the year. If you have a great speaker who you think is applicable to oil and gas, aerospace and medicine, we’d like you to help us put them out there and make their content available to classrooms throughout different school districts around the country.”

In recent years, the conference has even gone global—2014’s Pumps & Pipes webcast was available in 42 states and 66 countries throughout the world. That resonance among educators spurred the Pumps & Pipes Mentor STEM Teacher Program, which was also launched in 2015.

The third leg of the Pumps & Pipes triumvirate, Ellen Ochoa, Ph.D., center director and astronaut at Johnson Space Center, took attendees to one of our closest intergalactic neighbors—and the next destination for manned space flight.

“Getting to Mars is a pretty big topic,” she said. “Today, I wanted to focus on the human health and performance aspect of getting to Mars. It’s really been a major part of the conversation, in the news, and as a cultural cornerstone this past year. We’re continuing to get really exciting science results from our orbiters on Mars.

“And then there was the movie, The Martian, which envisioned a future mission that’s really not unlike what we’re thinking about for Mars,” she added. “But, of course, we’re not going to just abandon somebody there for several hundred days.”

To conclude the daylong event—which featured a live transcatheter aortic valve replacement, a keynote address by John B. Simpson, M.D., Ph.D., who helped catalyze the field of interventional cardiology and a networking session complete with 3D virtual reality imaging—a reception was held at Treviso Restaurant, co-hosted by the Texas Medical Center. While TMCx startup companies BrainCheck and iShoe, along with TMCx+ company Neosensory, demonstrated their technology, a special presentation highlighted the Texas Medical Center’s vision for the future.