An EMT and survivor of a mountaineering accident recently wrote a letter to a Memorial Hermann neurosurgeon to thank him for performing a life-changing, career-saving surgical procedure 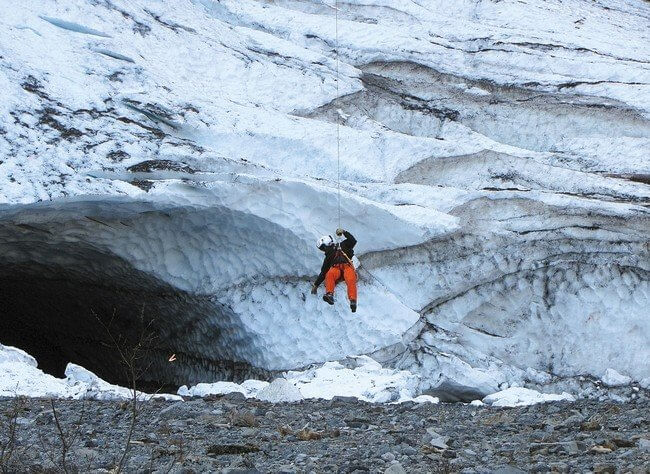 According to the American Alpine Club, a Boulder, Colorado-based non-profit organization that publishes annual reports and analyses of mountaineering accidents in North America, there were 154 reported accidents and 25 fatalities in the U.S. and Canada in 2013, a 17 percent and 26 percent decrease in accidents and fatalities, respectively, since 2010.

Among the 157 reported accidents in 2011 was a man named Miles McDonough.

On Sept. 7, 2011, 29-year-old Miles McDonough, an avid alpine climber, mountain skier and emergency medical technician, tumbled 65 feet down the side of a cliff during a mountaineering accident in the North Cascades in Washington State, three hours east of Seattle. He sustained numerous injuries from the accident, including a fractured humeral head and scapula on his right arm, a severe concussion and multiple lacerations on his torso, scalp and face. On top of that, McDonough also suffered from five fractured ribs, a seven-inch hematoma on his right shoulder and a 10-inch avulsion on his lower extremity. Amazingly, he survived.

A search and rescue team found McDonough 20 hours after the accident happened and transported him to a local hospital. After hours in intensive surgery and six months of physical therapy, McDonough worked to rehabilitate the damaged limbs but was unable to fully regain function in his shoulder and arm.

“I was in a sling for a long time, but then – after the bone had healed and I took the sling off – my arm didn’t work,” McDonough said. “It was sorting through what was actually going on and simultaneously trying to deal with it.”

At the perfect intersection of love for the outdoors and helping people
With both parents being medical professionals (his father is a urologist and mother a registered nurse), it could be said that taking care of people is in McDonough’s blood. He said he has long been interested in medicine, but it wasn’t until he worked as an EMT with Washington State’s mountain and helicopter rescue team in 2009 that it planted the seed in his head to help people in that capacity. McDonough decided to pursue a career as a physician and began completing prerequisite courses for medical school part time at the University of Washington from 2010 to 2013, but the physical condition in which the accident left him was a point of concern.

“When [the accident] happened, it definitely threw a wrench into those plans because I did not know if I would be physically able to complete the work that a physician would need to do,” McDonough said, adding that he continued his school work while simultaneously recovering from his injuries.

“There was a lot of uncertainty, but it was obviously an important thing, so I was just trying to juggle it with everything else that was going on in my life,” he said.

Coming full circle
Several months after McDonough’s initial surgery, with still no sign of regaining full function in his upper extremities, he and his parents decided to research neurosurgeons locally and across the country who would be able to provide him with a glimmer of hope. The search continued for a month and a half.

“After six months of seeing physicians in the Pacific Northwest, we were still going to a neurologist here and there just trying to figure out what was wrong,” McDonough said.

“Dr. Kim was the first individual we met with and he was just so receptive. Despite his busy schedule, he was willing to work me in because there was a cutoff for when you can do the neurosurgery and I was right on the cut, so he didn’t want to lose that window. Everything lined up so well,” said McDonough, whose birthplace is – coincidentally – Houston. “My mother and I joked that it was full circle.”

McDonough was scheduled for surgery a week after his initial visit with Kim, a distinguished researcher and surgeon who specializes in peripheral nerve repair using nerve transfer and nerve graft.

Kim explained that the surgical procedure consisted of taking a healthy nerve from another part of McDonough’s body and splicing it into his shoulder in order to connect the nerve signals from his arm to his brain. After the surgery, Kim evaluated the empirical data and determined that the surgery gave McDonough a 75 percent chance of seeing some improvement. But in a recent letter, McDonough thanked Kim for performing a surgical procedure that has helped him regain nearly 100 percent of the function in his shoulder and arm.

“It always makes my job very pleasant to know that I have made a positive impact to every patient that I encounter, but he does stand out because he was a world-class mountaineer and rescuer,” Kim said.

Along with Kim’s expertise, McDonough said he was impressed by how compassionate and personable Kim was during throughout process.

“Not every physician, especially every surgeon, is like that. It’s good to have one of the top-notch surgeons in his field also be that warm and considerate and going out of his way. […] It just seemed like a glowing example of how you can be one of the best in your field but not have that compromise of soft skills that are often just as important as those technical skills. That’s something I’m going to try to emulate as I go forward and transition from this academic studying to providing patient care on my own,” he added.

Helping others in more ways than one
McDonough is now a first-year medical student at the University of Washington’s School of Medicine. Although he is uncertain about which area of medicine he will specialize in, he said emergency care may be an option because of its intensity and dynamism that attracted him to to being a mountain and helicopter rescue EMT in the first place. He continues to help the Snohomish County Helicopter Rescue Team but focuses more on providing emergency care to patients.

“The reality now is that I spend all my time studying,” McDonough said. “If I’m able to get out once a month and do a rescue, I’d be pretty happy. […] I just try to keep it in perspective because at some point I’d like to give back and use my new skillset as a physician to [help people].”

Since his return back to the mountain, McDonough has helped rescue approximately 25 people. In March 2015, the Helicopter Association International presented his team with the Airbus Helicopters Golden Hour Award in recognition of their outstanding rescue missions, work that would not have been possible for McDonough without Kim.

“[Kim’s] great work on my shoulder has indirectly had a positive effect on the lives of many other people here in Washington State,” he said.