In pursuit of a vaccine for Chagas disease

How TMC researchers are developing a vaccine to treat Chagas

In pursuit of a vaccine for Chagas disease 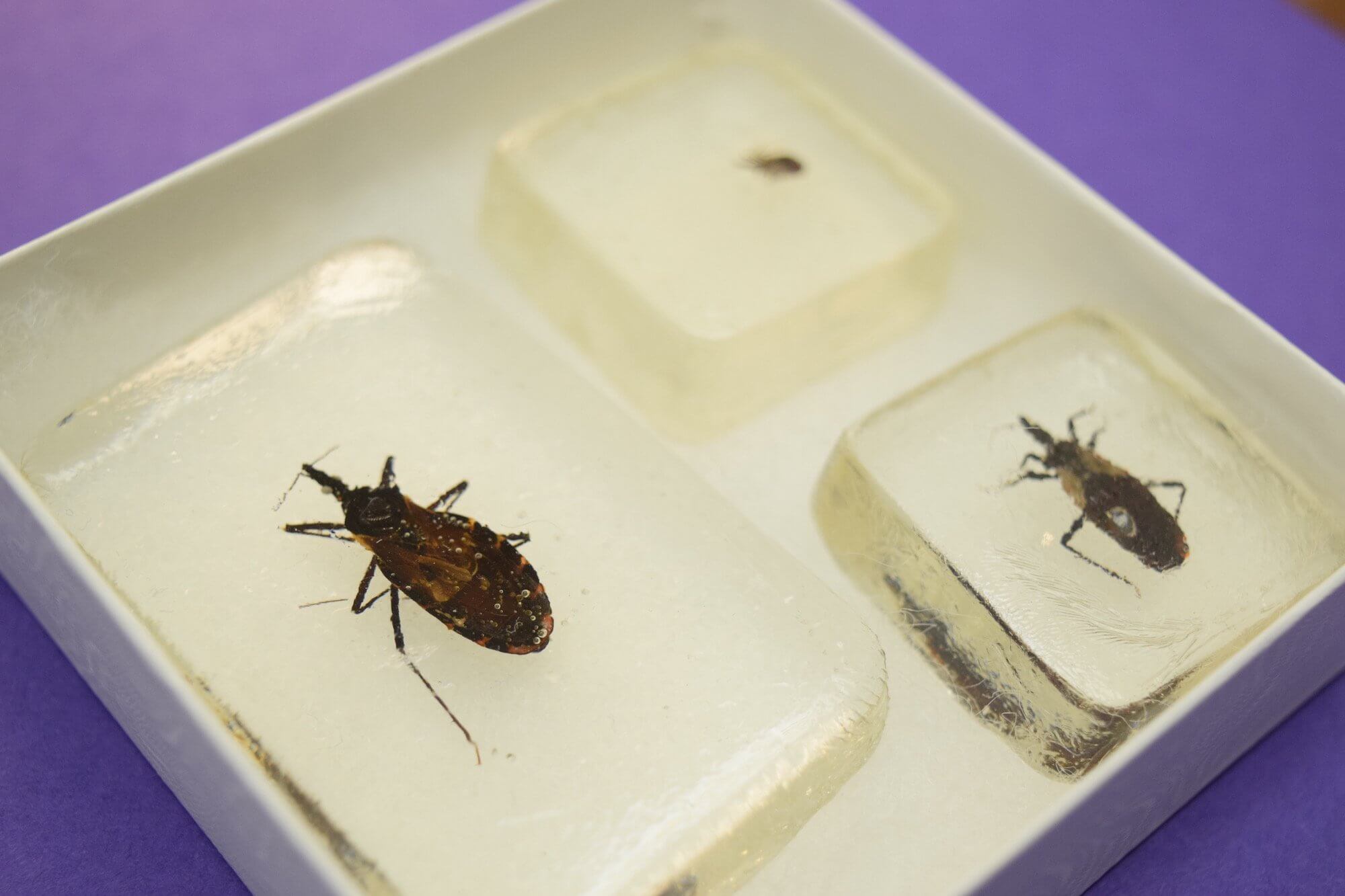 In the past few weeks, Chagas disease has made headlines with reports of new cases popping up around Texas and — most recently — with controversial pharmaceutical executive Martin Shkreli gouging prices of a medication commonly used to treat the disease.

Chagas disease, known as American trypanosomiasis, is a parasitic infection classified as one of the 17 neglected tropical diseases prioritized by the World Health Organization. Chagas and other NTDs have, for the most part, been eliminated in more developed areas of the world but remain a looming threat in impoverished global communities.

The potentially life-threatening disease is transmitted by triatomine bugs, colloquially called “kissing bugs,” which are typically found in cracks of poorly constructed homes in poorer communities. Though its nickname may sound harmless, the critter is far less innocuous than its name would imply, affecting approximately 8 million people worldwide, with most of the cases concentrated in Latin America — including Argentina, Brazil, Mexico and Bolivia. In the United States, an estimated 300,000 people are infected with Chagas, with reports of infections coming from Arkansas, Arizona, Missouri, Tennessee and Texas.

According to the U.S. Centers for Disease Control, there were 351 cases of Chagas in animals, primarily dogs, reported in 2013–2014 from about 20 percent of Texas counties. In that same period, 39 human cases were reported, 24 of which were acquired in another country, while 12 were acquired locally and the remaining three are unknown.

Peter J. Hotez, M.D., Ph.D., founding dean of the National School of Tropical Medicine at Baylor College of Medicine, explained that the blood-sucking triatomines are considered “silent feeders,” oftentimes coming out at night and biting victims — both humans and dogs — on the face or anywhere on the body where skin is exposed. But the infection doesn’t occur like a mosquito bite, which infects the host with its saliva. Instead, the parasite Trypanosoma cruzi responsible for Chagas disease lives inside the feces of the kissing bugs.

“What happens is, not very elegantly, they defecate their whole blood meal out and you rub the bug feces into your mucus membrane, [such as] your mouth, your eye or abrasion on the skin,” Hotez said.

Because the T. cruzi parasites circulate in the bloodstream once the triatomines’ fecal matter enters the body, Chagas can be transmitted from infected mothers to newborns during pregnancy or childbirth. In that same vein, infected donors of blood transfusions or organ transplants can also pass along the disease to recipients.

There are two phases of Chagas disease: the acute phase and the chronic phase. During the acute phase, which can last around two months, the parasites circulate in the bloodstream and patients typically experience mild or no symptoms.

According to data from the World Health Organization, less than half of the people affected with Chagas present initial symptoms, such as fever, headache, enlarged lymph glands, difficulty breathing, muscle pain, swelling and abdominal or chest pain. Other visible symptoms also include skin lesions or swelling of the lids of one eye, called Romaña’s sign.

Once patients enter the chronic phase of Chagas, the parasites migrate into different tissues, specifically cardiac and digestive muscle. Not only do the trypanosomes hide out in “nests,” but the parasites are patient and can remain in the muscle cells for 10, 20 or even 30 years without presenting any overt symptoms.

Hotez said Chagas is difficult to diagnose because the symptoms — if presented — imitate other diseases and illnesses, so many people who suffer from the disease, ultimately, go undiagnosed and untreated.

To compound the issue, Chagas isn’t a medical condition that will show up on a run-of-the-mill blood screening. Doctors must specifically test the blood chemistry for Chagas disease which is only done in a handful of specialty labs, such as those at Baylor College of Medicine and the CDC.

“When you go to your doctor for your bloodwork and you get your blood slip from Quest Diagnostics, it’s got the blood chemistry, the blood glucose, the [blood urea nitrogen], but there’s not a box for Chagas disease,” he added.

Without treatment and as the disease progresses, the parasites continue to destroy heart muscle and the nervous system which can then lead to sudden death or heart failure.

Potential treatments and the future of a Chagas vaccine

There are currently two antiparasitic drugs available to treat Chagas: benznidazole and nifurtimox. Because the drugs have not been approved by the FDA, the medication is available only through the CDC. Both drugs are highly effective in curing Chagas if treated early on in the acute phase, but — much like any other drug — they come with fine print: Because of the high toxicity of nifurtimox and benznidazole, it’s no surprise that they have a slew of potential undesirable side effects. Researchers who studied the drugs have reported patients suffering from a variety of side effects during clinical use, including anorexia, nausea, vomiting and insomnia. On top of that, patients have also reported suffering from vertigo, allergic dermatitis and convulsions.

Given the small window of opportunity to effectively treat Chagas, the drugs’ many potential side effects and the lack of a gold standard diagnostic test for the disease, “there are no good treatments,” according to Eric L. Brown, Ph.D., associate professor of epidemiology, human genetics and environmental sciences at The University of Texas Health Science Center at Houston School of Public Health.

However, Brown and a team of researchers from UTHealth School of Public Health and the National School of Tropical Medicine at Baylor College of Medicine are working on developing a vaccine that could help save the lives of millions worldwide.

“Not only would the vaccine be good for people in preventing disease, but you could conceivably immunize someone who is infected and maybe prevent some of the late-stage symptoms of Chagas from manifesting,” Brown said.

Earlier this month, Brown, who served as senior author, and his team published a study in the American Journal of Tropical Medicine and Hygiene in which they identified a molecule expressed by T. cruzi that they believe is responsible for the parasite’s ability to evade the immune system responses. Their data suggests that the parasites use a protein, Tc24, a B-cell superantigen, to dodge the antibody response that might help contain or prevent this pathogen from spreading in its early stages.

Brown said the next step in the research process entails chemically modifying Tc24 to elicit a protective response and conducting preliminary clinical trials to test its efficacy.

“The key isn’t just to mount a response. The key is to mount the correct response against the correct target that might make a big difference,” he said.

Nisha Jain Garg, Ph.D., a scientist at The University of Texas Medical Branch at Galveston who has researched Chagas disease for 20 years, recently published a vaccine study using a bioinformatics approach to screen the whole genome of the T. cruzi parasite.

Acquiring the genome database for T. cruzi allowed Garg and her fellow researchers to identify two of the parasite’s strongest antigens that could be used to mount an immune response of creating antibodies.

But much like Brown’s study, which could take upwards of six years to produce a viable vaccine, Garg said Chagas’ status as a neglected disease poses a problem for furthering vaccine research.

“It’s a neglected disease, so it’s very hard to get funding to further develop this vaccine,” Garg said. “It’s a small amount of funding if you compare it to the other diseases […] like HIV or malaria infections. Comparably, we’ve used a small amount of money to reach where we are, but to go further, we need more.”

“Vaccines aren’t the only ways of prevention.”

While scientists continue to work on a vaccine for Chagas, many of them are also beating the drum to raise more public awareness of the disease.

“Vaccines aren’t the only ways of prevention,” Brown said. “Just raising awareness, to me, is prevention in a way. […] Making people aware is a huge thing, and I think that’s where we need to start.”

The idea that Chagas is not in the United States or doesn’t affect us is a common misconception that has lulled people into a false sense of security and, as a result, has exacerbated the issue.

Hotez recently published a paper that showed evidence of kissing bug activity and transmission in Texas since approximately 100 years ago.

“I don’t think this is necessarily new. I think it’s been going on a long, long time. It’s just that no one was paying attention to it,” he said. “We don’t have our arms around the extent of this problem in Texas.”

Hotez added that Texas is unique compared to other states because the active transmission of Chagas is so high. Nearly half of the triatomine bugs collected have tested positive for T. cruzi and has become an endemic disease in dogs, but there’s still much more to learn about Chagas.

“We need to better understand where the affected communities are and what percentage of people are affected. This requires us to do programs of active surveillance, and that’s our first recommendation. This is true of all the neglected diseases, not just Chagas,” Hotez said, referring to House Bill 2055, which this year established a sentinel surveillance program for emerging and neglected tropical diseases in Texas. In addition, getting a better understanding of Chagas’ mechanisms of transmission and developing good interventions are also important components in the continuing fight against Chagas.