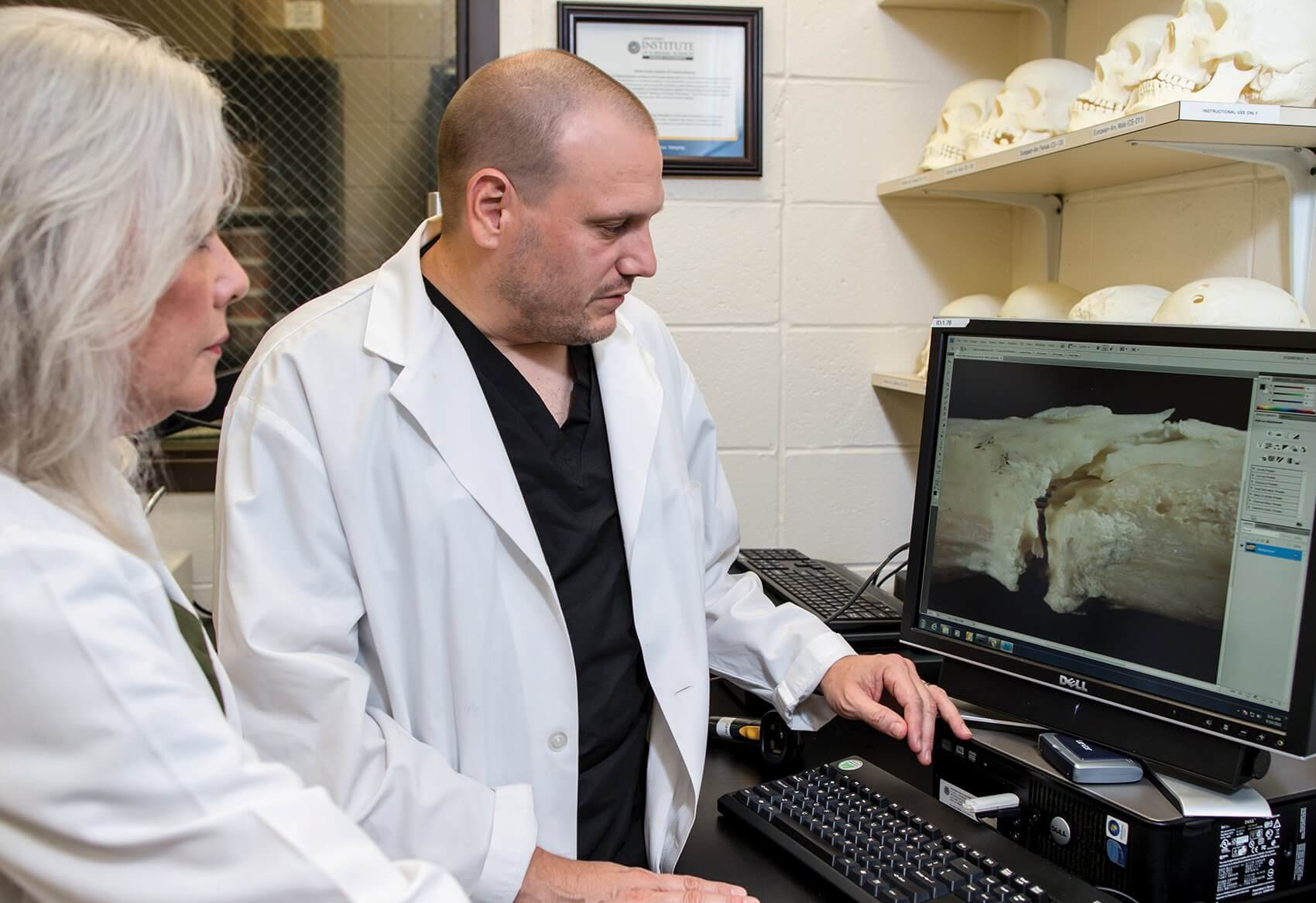 When a sudden death occurs in a metropolitan area the size of Harris County—over four million people living within 1,778 square miles—a diverse team of experts is essential to determine the cause and assist law enforcement in solving the case. The Harris County Institute of Forensic Sciences’ Forensic Anthropology Division is a vital branch of that team. When a call for assistance comes from the Institute’s forensic investigators or medical examiner, these experts answer the call to action. They assist with everything from recovering skeletal remains at a crime scene and identifying unknown individuals to providing support to the medical examiner at autopsy. Through in-depth scientific analysis, they seek facts pertaining to the death and provide a name to the unknown.

“There is a great need for anthropology work in Harris County; our office and county officials are very progressive in the sense that they recognize the need for this forensic sub-specialty and the type of casework where we can add value,” said Christian Crowder, Ph.D., director of forensic anthropology.

“We have a rotating on-call schedule,” said Sharon Derrick, Ph.D., a forensic anthropologist and identification manager. “If, during the day or night, there is a death scene that requires an anthropologist, our investigators will call the anthropologist on call to assist with recovery.”

Derrick noted that the anthropologist who helps with recovery at the scene is not necessarily assigned to that same case going forward. This ensures that whoever works on the case will be blind to the circumstances and any information that could influence the findings. The anthropologist assigned will get to work gathering whatever helpful information they can share with the pathologist.

“There are many things an anthropologist can tell us that go beyond what a pathologist is trained to do—how old the injuries were, how many episodes of injury there were and also a little bit more about mechanism of injury, what type of force was directed and from where to cause that kind of bone injury or fracture,” said Dwayne Wolf, M.D., Ph.D., deputy chief medical examiner for Harris County.

The team also may determine whether a bone is of legal significance, as not all remains that are discovered are necessarily forensic cases, or whether the bone is even human at all. For example, someone digging in his yard may uncover an old bone that has historical significance, but is not related to a crime, or a bone that turns out to be from an animal. Sometimes the anthropologists can use a simple photo to make the determination before the area has to be declared a crime scene.

Another major part of the forensic anthropologists’ work is helping to identify remains that aren’t easily identifiable either by fingerprints, contextual evidence or other means. They do this by developing biological profiles, which involves evaluating the remains to determine attributes like age, sex, ancestry or race, and stature. As the identification manager, Derrick facilitates that process, maintaining ongoing lists of unknown remains and inputting data into various national databases used to find and identify missing persons.

“It’s very gratifying to be able to use my training to provide a name and a face to a person,” Derrick said. “To me, it’s the ultimate thing you can do for someone, to make sure people know who they are.”

Forensic anthropology is a relatively young field, but it has become increasingly vital to solving crimes and identifying unknown persons. As a result of its growing importance, in 2009 experts in the field began to suggest the need for standardization and quality assurance.

“There was a report issued from the National Academy of Sciences that caused a shockwave in the field because it specifically pointed out some issues within the forensic science disciplines nationwide,” said Crowder. “It questioned how we, as forensic scientists, know that the types of analyses and the type of work we’re doing is quality work and is valid science.”

These questions paved the way for the Institute’s Forensic Anthropology Division to seek accreditation for quality and competence in their particular field of expertise through the ANSI-ASQ National Accreditation Board, which incorporates International Standards/ISO into their accreditation program requirements. ISO has become commonplace in various business segments as it ensures that common standards are used between nations in a host of different fields, from manufacturing and agriculture to, now, forensic anthropology. Meaning that, once accreditation was granted, the quality of the Institute’s forensic anthropology work would be recognized at the international level.

“Until now, there was no program for an anthropology laboratory to be assessed and provided with accreditation,” said Crowder. “So, we engaged our internal quality division and worked closely with them and the ANSI-ASQ National Accreditation Board to establish this accreditation for us and for others. In August, we became the first anthropology laboratory in the nation to be accredited under the ISO/IEC 17020 program.”

Becoming accredited was a rigorous process that went far beyond simply checking a few boxes. The reviewers looked at how evidence is handled and stored, file management and organizational systems, methods and techniques used during investigations, and much more.

“Because the accrediting board had never accredited a forensic anthropology laboratory before, they needed to have a good understanding of the types of analyses we were doing so they could reach out to the proper experts to put on the accreditation review team,” Crowder said. “They provide subject-matter experts specific to what you do.”

“There were more than 300 standards reviewed, and it wasn’t all anthropology related,” Derrick said. “Some of it was relative to internal quality management oversight and some to the administrative management of the division.” She noted that the review team even had her run through techniques and methods on a skeleton while they observed.

“It was very time consuming for us, but it’s certainly worth it for our office and for the field,” Derrick said.

The accreditation does not last forever—after three years, the office will need to be reassessed.

“Anthropology is not a static field—the accreditation organization wants to make sure that once you receive that initial accreditation your team is moving in the right direction; that you’re continuously improving techniques,” Crowder said. “They provide recommendations and want to see what you have done to address their recommendations. You have to keep striving to improve yourself.”

Crowder and Derrick both emphasized that in an increasingly globalized world, it is important to have an internationally recognized set of standards to provide assurance regarding the quality of the work being done in the forensic anthropology field. Each anthropologist testifies in court a few times a year, and they want judges and juries to have the highest degree of confidence possible in their work.

“We can show the work we do is very scientific, is very rigorous, and the product we are providing our customer—which might be the pathologist but is ultimately the community—is quality work,” Crowder said. “Now when we go in the courtroom, not only can we be on the stand and say we’re certified anthropologists, but also our entire laboratory is an accredited lab. Now we have two standards we can provide to the court, so they can have confidence this is a valid scientific product.”