A new twist in genetic switches

A new twist in genetic switches 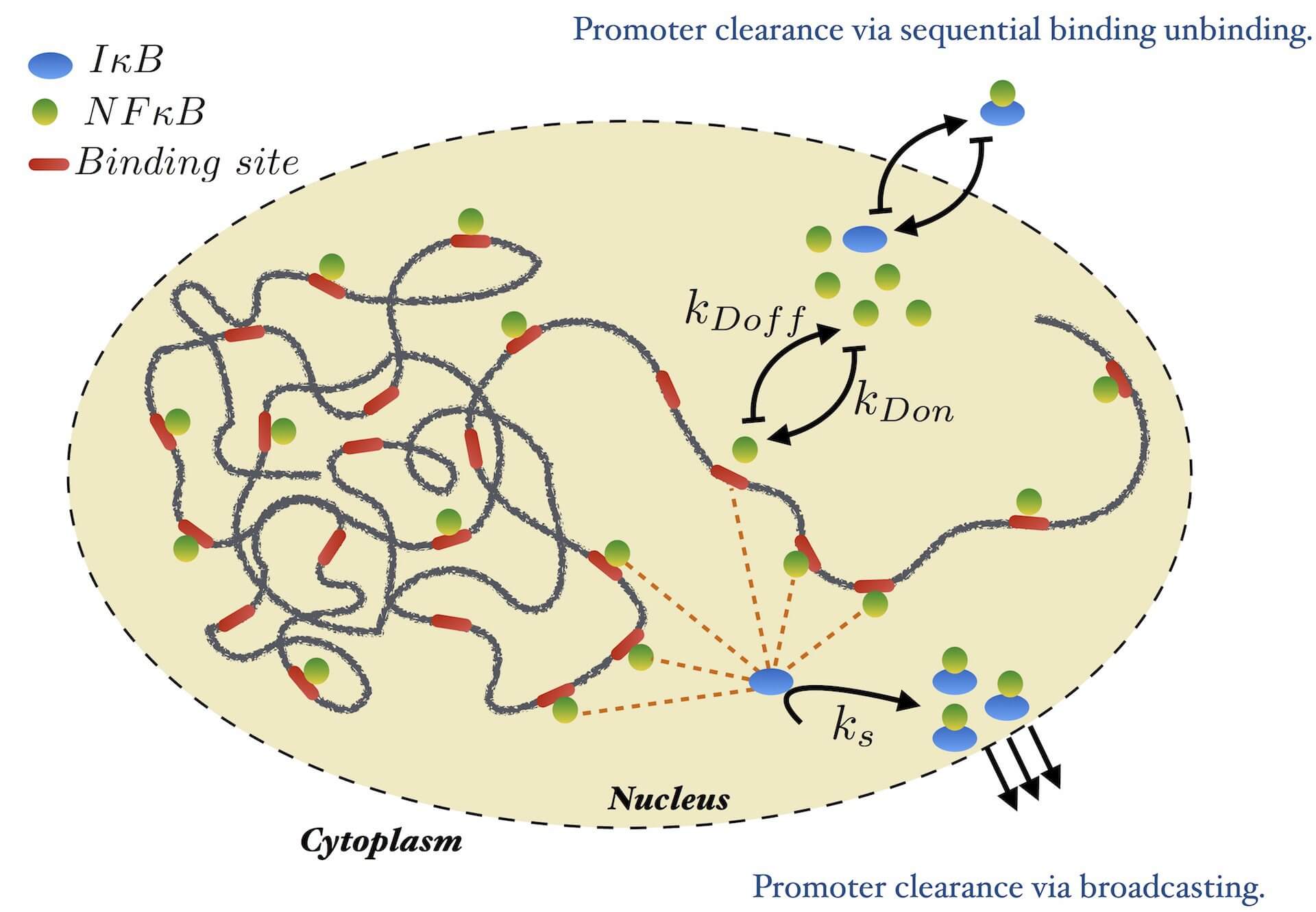 Rice University researchers have a new twist for those clinging to old ideas about a basic biological process.

The Rice lab of theoretical biological physicist Peter Wolynes reported this week that the activity of a master regulator in cells is determined by kinetics, a notion that counters decades-old classical models in molecular biology that attribute the control of genetic processes to the thermodynamics of biochemical reactions.

The genetic switch in question relies on a recently discovered process called molecular stripping, which quickly stops the switch from making new proteins, the tiny workhorses that are essential to all life.

The research appears this week in the Proceedings of the National Academy of Sciences.

The regulatory switch the lab studied has three components: an NFkB protein transcription factor, IkB inhibitor proteins and the DNA that houses the genes.

NFkB proteins are a family of dimeric (two-part) proteins that bridge extracellular signals and gene expression, alighting on DNA to activate the manufacture of specific proteins in response to outside stimuli. They organize many cellular functions, including the inflammatory response, immune response to infection and the programmed cell death that inhibits cancer.

Wolynes and Rice postdoctoral researcher Davit Potoyan used the Rice lab’s AWSEM algorithm (for associative memory, water-mediated, structure and energy model) to analyze how molecular stripping works for the NFkB family. The algorithm is able to predict how proteins fold based on the interacting energies of their components.

In this case, the calculations showed that an NFkB protein attached to DNA becomes twisted when it is joined by an IkB molecule to form what they call a transient ternary structure. The structure is short-lived because the twist quickly releases the DNA.

“Where the sequence binds to NFkB is nowhere near the DNA, but it causes the two clampy ‘hands’ holding the DNA to rotate with respect to each other,” Wolynes said.

“That breaks the symmetry, so now only one of the hands holds onto the DNA, which is thereby released,” Potoyan said.

Co-author Elizabeth Komives of the University of California at San Diego (UCSD) and her colleagues found through experimentation last year that IkB promotes the disassociation of NFkB from DNA, which instantly halts transcription. But they weren’t able to define how it works because X-ray crystallography images of the proteins captured incomplete information, Wolynes said. With AWSEM, the researchers were able to model the complete proteins and thus extract the details of how they interact.

Because NFkB proteins can activate so many processes at once, timing is important, he said. “NFkB isn’t just sending out one signal, turning on the manufacture of one new protein. It’s running a broadcast network, turning on many genes, including IkB,” Wolynes said. “The stripping mechanism means that instead of leaving all the genes turned on and letting each one figure out when to turn off, IkB strips the NFkB and makes sure they all get turned off. Transcription ends at that point.”

He said this shutdown appears to happen all at once. “If you have a process that turns on 100 different genes, you probably want them all also to turn off at the same time. You don’t necessarily want five random genes taking their time, because that would lead to disorganized cell behavior.”

“In the classical picture of gene switches, we don’t talk about time,” Potoyan said. “We just understand that a gene turns on and off. But here, timing is critical because there are hundreds of genes being regulated. In molecular stripping, all the transcription sites become visible to IkB, which broadcasts the signal for every NFkB to unbind at once.”

Wolynes said it’s known that misregulation of IkB or NFkB can lead to many medical problems, including cancer, “so turning genes off at the right time is important.” He suggested that because NFkB switches have such wide influence, targeting the switches with drugs to control specific processes will be a challenge, but one well worth pursuing.

“We believe this stripping process may be very general for master regulator genes,” he said. “It’s a system that violates that 40- to 50-year-old paradigm of how a gene switch works. That’s one of the reasons we think this study is important.”

The National Institute of General Medical Sciences and the D.R. Bullard-Welch Chair at Rice supported the research. The researchers utilized the National Science Foundation-supported DAVinCI supercomputer and the Night Owls Time-Sharing Service cluster, both administered by Rice’s Ken Kennedy Institute for Information Technology.

In this video produced by Rice University scientists using the AWSEM modeler, a genetic switch known as NFkB-DNA-IkB transforms through molecular stripping. At the start, the NFkB dimer (green and yellow) grips DNA (red), which activates the transcription of genes. IkB (blue), an inhibitor protein, stops transcription when it binds to NFkB and forces the dimer to twist and release its hold on DNA. The yellow domain at the bottom of IkB is known as the PEST domain, which binds first to NFkB. (Credit: Wolynes Lab/Rice University)